The better burger chain has seen the air taken out of its high multiple. Can the company deliver the growth the market expects?

What: Shares of better burger chain Habit Restaurants, Inc. (HABT) have been serving up indigestion this year, falling 29% according to data from S&P Global Market Intelligence. Habit has followed a pattern common in the fast casual restaurant industry, with a high-priced IPO that's failed to live up to expectations. As you can see from the chart below, Habit's decline this year has been steady. 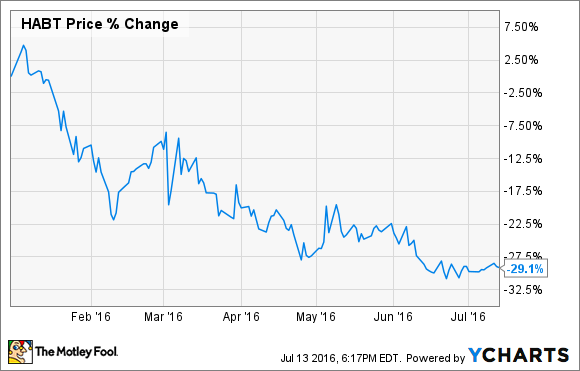 So what: A number of restaurant chains have come on the market in recent years, including Potbelly, Noodles & Company, El Pollo Loco and others, which have struggled to live up to their high valuations and have lost value since their debuts.

Habit came on the market promising to expand to 2,000 restaurants nationwide. Its performance since then hasn't been terrible, but it hasn't been good enough to justify a formerly triple-digit P/E either. Habit shares fell 11% after it posted reported fourth-quarter earnings in early March. The burger flipper turned in a respectable three months with a 3.3% increase in same-store sales, and it beat analyst estimates by a penny with an EPS of $0.05; however, the market was turned off by revenue guidance for 2016 of $286-$290 million, which was below the analyst consensus.

The stock bounced back briefly on a first-quarter report in May, in which EPS of $0.10 also beat estimates by a penny, but same-store sales growth slowed to 2%, and the stock continued to slide through the rest of the year as investors began to believe it was overvalued.

Now what: Habit is set to report second-quarter earnings in early August, but I wouldn't expect fireworks based on its results earlier this year. Management has projected full-year comparable sales growth of 3%, and its track record of 49 straight positive comps shows that the company should eventually bounce back from the hole it's in. Some analysts believe the burger boom is peaking, but there is still plenty of share to grab from McDonald's and the other legacy chains. 2016 may be a forgotten year for Habit, but I wouldn't bail on the stock yet.

Yum! Brands Throws Down a Challenge to McDonald's and Burger King
366%