Please ensure Javascript is enabled for purposes of website accessibility
Log In Help Join The Motley Fool
Free Article Join Over 1 Million Premium Members And Get More In-Depth Stock Guidance and Research
By Anne Burdakin - Jan 23, 2020 at 8:50AM

A new decade at Yum! starts with a new CEO and a new business category it hopes could be a catalyst for growth.

If you're a fan of quick-service food, you've probably picked up dinner at a Yum! Brands (YUM 1.70%)-operated chain. Its brands include KFC, Pizza Hut, and Taco Bell, with over 48,000 quick-service restaurants (QSRs) in 145 countries, making it one of the world's largest restaurant companies.

It was time to start a new Habit

Earlier this month, Yum! Brands announced its first foray into the burger category with a definitive agreement to acquire Habit Restaurants (HABT) for $14 per share in cash, or a total of about $375 million. Yum! says it plans to fund the deal using cash and debt. The acquisition is expected to close in the second quarter of 2020.

Although The Habit Burger Grill is known as a burger chain, the menu also offers chicken sandwiches, salads, and ahi tuna at its nearly 300 company-owned and franchised restaurants across the U.S. and China (about two-thirds of its locations are in California). With backing from Yum!, Habit hopes to grow to 2,000 locations.

After the deal is complete, Habit will remain based in Irvine, California, and will continue to be managed by CEO Russell Bendel, who will report directly to Yum! Brands CEO David Gibbs. 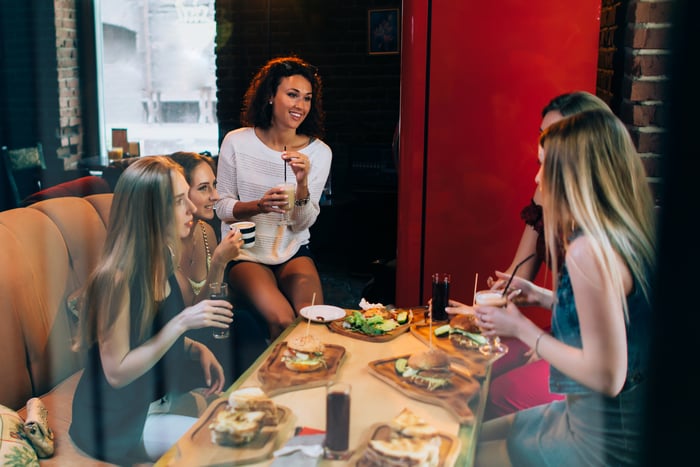 The deal signals a shift in the Yum! business strategy, coinciding with Gibbs succeeding CEO Greg Creed, who retired. The company hasn't acquired a stand-alone fast-casual restaurant chain since 1997, when Yum! went public after being spun off from PepsiCo, and hasn't been in the burger business since it sold the A&W chain of restaurants in 2011. Gibbs said:

"With its delicious burgers and fresh proteins char-grilled over an open flame, The Habit Burger Grill offers consumers a diverse, California-style menu with premium ingredients at a QSR-like value. The transaction is a win-win because it allows us to offer an exciting new investment to our franchisees and to expand an award-winning, trend-forward brand through the power of Yum!'s unmatched scale and strengths in franchising, purchasing, and brand-building."

Yum! says Habit's company-operated volumes have increased to $1.9 million per unit, rising nearly 50% over the past decade. The units are growing at a 28.4% compound annual growth rate.

What difference will the acquisition make for investors?

Yum! is looking for a catalyst. The company's efforts to turn around Pizza Hut are taking longer than anticipated, and its investment in Grubhub, the meal delivery service, resulted in a $60 million writedown of that investment in the third quarter of 2019.

The Habit acquisition was pretty small as acquisitions go, and Yum! investors won't see much, if any, impact on its financial results. But long term, the shift in strategy may build to something interesting in fast-casual, where Yum! has not had a presence. Burger offerings are a good idea, but I'd like to see Yum! emphasize the healthier side of Habit's menu and possibly make other acquisitions to bolster the category.

Although this is an intriguing development, I don't see any reason to invest at this time. The company needs a few quarters of better results. The new CEO is bringing a new vision and energy to Yum!, but until financial results improve and the new strategy becomes clearer, I'd avoid the stock.