Yum! Brands (NYSE:YUM) is about to get even bigger.

The parent company of KFC, Taco Bell, and Pizza Hut said Monday that it would acquire Habit Restaurants (NASDAQ:HABT) a fast-casual burger chain based in Southern California. Yum! is already the world's biggest restaurant company, with more than 49,000 locations in countries around the globe. Taking over Habit will give it more than 270 fast-casual locations to work with, as well as a promising and fast-growing brand.

Yum! CEO David Gibbs explained the move: "We've emerged from our three-year transformation stronger and in a better position to accelerate the growth of our existing brands and leverage our scale to unlock value from strategic acquisitions. As a fast-casual concept with strong unit economics, The Habit Burger Grill is a fantastic addition to the Yum! family and has significant untapped growth potential in the U.S. and internationally."

Yum! is paying $14 per share, or approximately $375 million, a relative bargain considering that Habit debuted on the market at $18 per share in November 2014. Let's take a closer look at three reasons why Yum! is buying Habit. 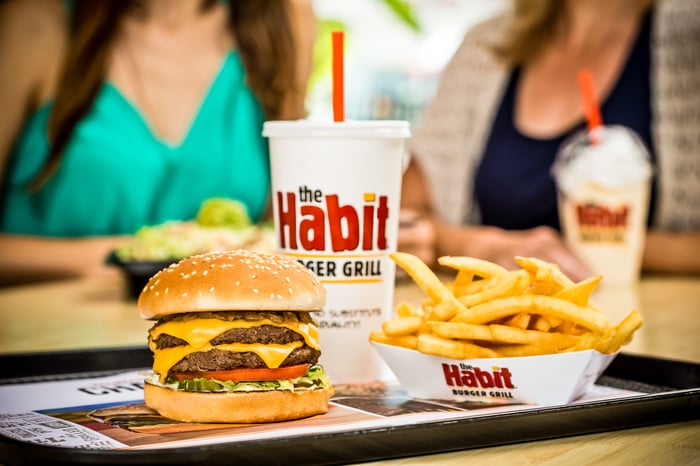 1. The international potential could be huge

Founded in 1969, Habit has grown slowly over its history, as it was just a local Southern California chain for much of that time. Since its initial public offering in 2014, the brand has expanded more quickly. It now has over 270 locations in 13 states, with most of them company-operated, though the brand also franchises. Still, that's almost nothing compared to fast-food chains that Yum! operates which cover both U.S. and international markets with thousands of franchised locations.

Yum! is likely hoping to do the same with Habit, following peers like Restaurant Brands International, which has aggressively expanded Burger King abroad, as burger concepts have proven popular with international diners. Shake Shack has also been well received abroad, and McDonald's has thrived around the world.

Gibbs said in the statement that Habit has significant untapped growth potential in the U.S. and internationally. Expect Yum! to leverage its marketing prowess and franchisee network to open up Habit locations in foreign markets, something Habit would have struggled to do on its own. Habit hopes to grow to more than 2,000 locations with Yum's help, according to The Wall Street Journal.

With KFC, Pizza Hut, and Taco Bell under its umbrella, Yum has a diversified presence in fast food. Yet even with three distinct brands, it lacked the most popular fast-food concept, a burger chain. Burgers and fries are the quintessential American fast food, and their popularity explains why McDonald's is the world's biggest restaurant brand by sales, with rivals like Burger King and Wendy's also popular globally. Acquiring Habit fills that gap for Yum!, and gives the company a new brand where it can apply its marketing and franchising acumen.

Yum! also lacked a fast-casual brand before this acquisition. With Habit, it gets a stake in a company known for higher-quality burgers that are made to order, unlike those at most traditional fast-food chains. Gaining a fast-casual brand should also help give it exposure to a new audience, as some Habit customers don't frequent Yum!'s other brands.

3. It's a good price for a strong brand

Though Habit struggled on the stock market during its five years as a publicly traded company, that was not the fault of the product. Habit and its burgers have earned a number of accolades over the years. In 2019, it was named Best Regional Fast Food in the USA Today Readers' Choice awards, and Thrillist named it one of the "underrated burger chains that need to be in every state."

Habit's post-IPO spike came in part because its burger was named as the best in fast food by Consumer Reports shortly before its market debut. The chain's average restaurant sales of $1.9 million are above average for the industry, but the restaurant stock has struggled with high expectations, rising labor costs (especially in its home market of California), and the rise of third-party delivery apps (which kept diners at home and ate into operators' profits).

At just $375 million for a critically acclaimed product line and a well-performing business, Habit seems to be a bargain for Yum! Brands. If the fast-food giant can expand the concept to 2,000 locations and open up international markets for Habit, there's little doubt that the deal will pay off over the long run.