You might not pit Westport Fuel Systems Inc. (NASDAQ:WPRT) and Navistar International Corp. (NYSE:NAV) against each other when it comes to making an investing choice, but the two companies have a lot in common. The fortunes of both are tied closely to the health of the trucking industry. Navistar is a truck manufacturer that owns the globally renowned International brand, while Westport develops technologies that enable engines to run on alternative fuels like natural gas.

Interestingly, both are currently losing money, but neither can blame the conditions in the trucking industry for it. Navistar appeared to be well-managed company until 2012, when the Environmental Protection Agency rejected its then-CEO Daniel Ustian's ambitious engine technology and penalized the truck maker for non-compliant engines. The company's warranty claims soared, hurting its market share. From 2011 to 2012, Navistar's profits of $1.7 billion swung to losses to the tune of $3 billion. The company has yet to report a profitable year since.

Westport's is another intriguing story. Its growth depends almost entirely on the pace of adoption of natural gas as an alternative fuel, which has been glacial at best. Westport's transition from the development phase to the commercialization phase is also proving to be a time-consuming and cash-guzzling process. To make matters worse, plunging oil prices have left fleet operators with little incentive to switch to natural-gas vehicles. The result: Westport has yet to turn a profit.

That said, both companies stand at an interesting juncture today, and almost appear to be on the verge of a turnaround. So if you were to bet on one now, which one should it be?

The case for Navistar International

The worst is over for Navistar. Ousting Ustian and adding Cummins engines to its trucks were lifesavers for the embattled company. From $3 billion in 2012, Navistar's losses are down to about $107 million in the trailing twelve months. The truck maker sprung the biggest surprise on investors when it recently reported its first profitable quarter since 2012. Navistar's aggressive efforts to breakeven are reflected in its numbers.

What's really encouraging is that despite the hurdles it faced in recent years, Navistar's International continues to rank among the top five brands in the U.S. According to Statista's July numbers, International is the fourth-largest heavy-duty Class 8 truck brand in the U.S. with 11% share, behind Daimler's Freightliner, PACCAR's Kenworth and Peterbilt nameplates. Navistar's recent partnership with General Motors to manufacture its G Van cutaway models further validates the truck maker's place in the industry.

It's still a highly leveraged company in a competitive market, but it may not have to wait long to get into the black again. What's more, Navistar is even considering partnerships or mergers, which makes it an even more interesting stock to watch now.

The case for Westport Fuel Systems

The alternative-fuel truck market may have failed to take off, but that's not to say that Westport didn't catch fleet operators' attention: Its already enviable line-up of customers expanded significantly thanks to its recent merger with Fuel Systems Solutions. This picture should give you an idea about Westport's growth potential. 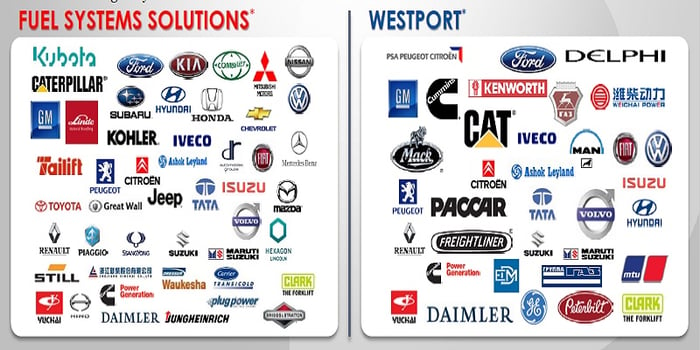 Of course, it remains to be seen what shareholder value the merger can eventually add. Much depends on the success of Westport's high-pressure direct-injection (HPDI 2.0) technology, which is to be commercially launched in the coming months. Targeted at the high-potential heavy-duty trucking market, HPDI 2.0 aims to provide OEMs with a low-cost, fuel-efficient option for switching to natural gas. The cost factor is especially important after the recent oil price plunge. If successful, HPDI 2.0 could change Westport's fortunes.

It's clear that both Navistar and Westport have fought the odds and are working hard to become profitable. But we have a clear winner here: Navistar. Management has made great progress in getting the company back on track, and macro factors are largely to blame for its slow growth. If the trucking market wasn't as sluggish, the International brand might have already driven Navistar to profits by now.

Westport, on the other hand, has yet to establish a sustainable business, and the challenges it faces far exceed those of Navistar. While the merger could be a game changer, no one knows yet how it'll play out. Most importantly, when Westport will turn profitable is anyone's guess. So buying Westport shares today is speculative, which isn't the case with Navistar.