Please ensure Javascript is enabled for purposes of website accessibility
Log In Help Join The Motley Fool
Free Article Join Over 1 Million Premium Members And Get More In-Depth Stock Guidance and Research
By Matthew DiLallo – Sep 1, 2016 at 10:00AM

Billionaires are bailing on this billionaire-led energy infrastructure giant.

Billionaires seem drawn to Energy Transfer Equity (ET -0.56%). Maybe it's because the company was cofounded by billionaire Ray Davis, while fellow co-founder and CEO Kelsey Warren's current net worth is $4 billion. That said, during the second quarter several billionaires sold their units of the energy infrastructure giant with Ken Griffin, James Simons, and Daniel Och unloading nearly 3 million units combined according to recent Form 13-F filings with the Securities and Exchange Commission. While blindly following these billionaires out of this stock would not be a prudent course of action, it is worth drilling down into why so many wealthy investors dumped units last quarter.

Energy Transfer Equity has taken investors -- billionaires and otherwise -- on a roller coaster ride over the past year. As the following chart shows, units plunged nearly 90% from last September through this past February, before rallying sharply after hitting rock bottom: 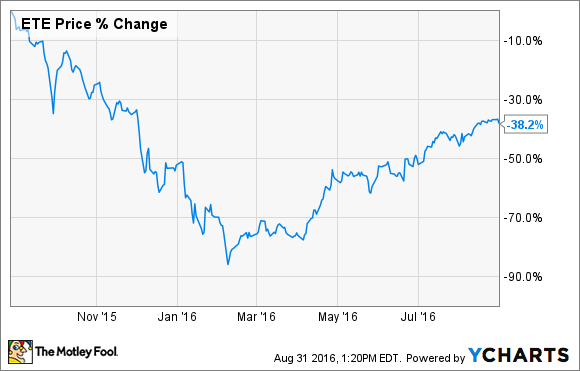 The energy infrastructure giant's initial plunge all started with Kelsey Warren's dream of taking advantage of the oil market downturn to create an energy infrastructure behemoth. To do so, he pursued rival Williams Companies (WMB 0.21%), eventually sealing a cash-and-stock deal. Unfortunately, the energy market downturn only grew worse, which when combined with a poorly chosen transaction structure led to a deep drop in Energy Transfer Equity's unit price. The decline accelerated when the company fired its CFO after he reportedly tried to scuttle the Williams deal. In the end, that deal fell apart after a judge ruled that Energy Transfer Equity could walk away. The unraveling of the deal that almost was its undoing fueled a stunning rally in the company's unit price last quarter: 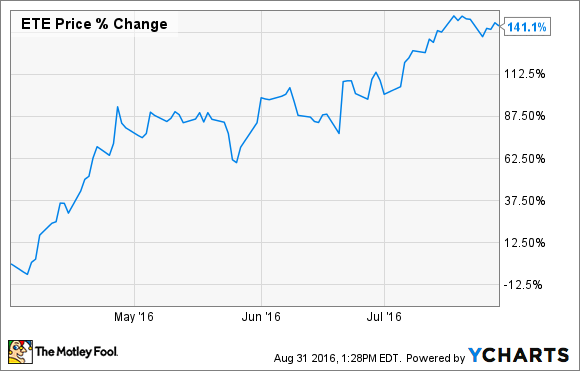 That surging unit price was enough for several billionaires to take some money off the table. Ken Griffin's Citadel Advisors, for example, unloaded 72% of its stake during the quarter, which was more than 100,000 units. Meanwhile, OZ Management's Daniel Och dumped 30% of his stake or more than 2.6 million units, and Renaissance Technologies' James Simons carved off more than 10% of his position or about 250,000 units. Needless to say, when big investors head for the exit, the market takes notice.

Smart move or too early?

While every investor has their reasons for selling, the primary reason to sell is due to the view that a company has limited upside in the future. After surging more than 100% last quarter alone, that is an understandable viewpoint in Energy Transfer Equity's case. Further, despite getting out from underneath the burdensome transaction with Williams Companies, Energy Transfer Equity still faces an uphill battle. For example, the company and its three MLP subsidiaries all have elevated debt levels. Not only do all four companies have net debt-to-EBITDA ratios north of 6 times, but two have junk-rated credit. Moreover, three of its MLPs paid out more in distributions last quarter than they generated in cash flow. For many investors, those would be reason enough to sell.

That said, Energy Transfer Equity believes that its current issues are just temporary because its energy infrastructure franchises are in the midst of an ambitious growth phase. Its namesake midstream MLP, Energy Transfer Partners (ETP), for example, has more than $10 billion of primarily fee-based organic growth projects under construction and expected to go into service through 2018. Meanwhile, its crude oil pipeline MLP Sunoco Logistics Partners (NYSE: SXL) has about $1.6 billion of projects under development. Once those projects come online, both companies will be throwing off much higher cash flow. Further, while Warren chose to walk away from the Williams deal, he has not sworn off M&A. Instead, Warren recently said that the company is "gearing back up" with an acquisition strategy. An accretive deal could push the unit price much higher, especially if it improves the company's leverage metrics in the process.

On the one hand, it is easy to see why several billionaires cashed in on Energy Transfer Equity last quarter. Not only had units run up sharply, but the company still has several problems to overcome. That said, there still appears to be plenty of upside given the organic growth pipeline of its MLPs and its M&A potential. Because of that, it is probably best not to follow the billionaires going out the door, but to stick with the one who built the company into the giant it is today.