Please ensure Javascript is enabled for purposes of website accessibility
Log In Help Join The Motley Fool
Free Article Join Over 1 Million Premium Members And Get More In-Depth Stock Guidance and Research
By Matthew DiLallo - Mar 29, 2016 at 11:05AM

Say goodbye to the merger synergies.

The energy market downturn has exposed a big problem in the sector: Energy companies make awful forecasters. Take Energy Transfer Equity (ET 3.17%), for example, which just a few months ago thought it would be able to capture $2 billion in commercial synergies by the end of the decade by combining with Williams Companies (WMB -1.18%). Now, that number is down to a mere $170 million because of the impact low oil prices will have on the combined companies' ability to create long-term value.

Say goodbye to the synergies
Energy Transfer Equity spent months trying to convince Williams Companies to combine with it to create the largest energy infrastructure company in the world. In the end, it was able to win out because the deal promised three things:

At the time, the company expected the $2 billion in synergies to come after it invested an incremental $5 billion on integrating assets, optimizing capacity, operating more efficiently, and eliminating redundancies: 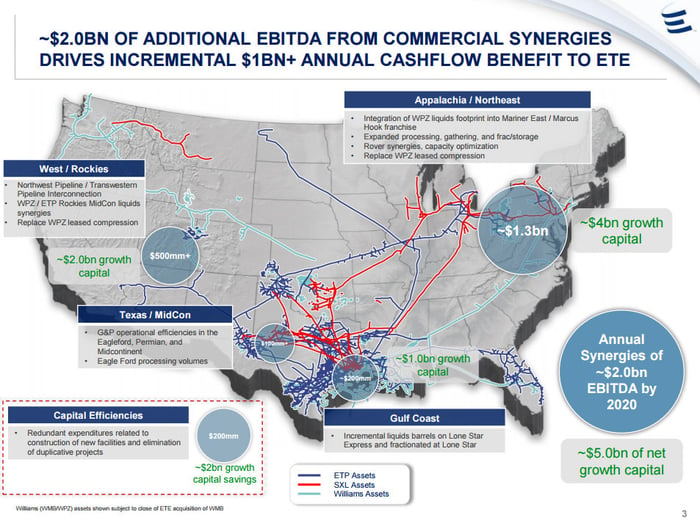 However, a lot has changed in a few short months, including oil prices and the availability of credit. Both are playing a major role in eroding away this synergy potential.

Blame oil and credit
When the transaction was announced, oil was in the mid-$40 a barrel range, with the expectation that it would head back into the $50s and beyond in the years ahead. That improved oil price would continue to drive volume growth, which would require additional infrastructure assets being built. Instead, oil has headed south, taking oil and gas production with it, as well as projected energy infrastructure growth. In other words, the oil and gas volumes Energy Transfer Equity was expecting just might not be there in the future because of low oil prices.

In fact, the company is basing its new merger synergy number on oil staying between $32.92 and $44.31 per barrel between now and 2020. At that level, it would result in fewer capital dollars being spent on integrating the system, hence the paltry $170 million synergy number. However, if oil were to recover and range between $53.97 to $64.26 per barrel by 2020, those synergies would rise to around $590 million. While still well below the initial forecast, it shows the impact the price of oil will have on the future commercial growth potential of the combined company.

The other big factor that has torpedoed the merger synergies is the significant deterioration in credit within the energy sector. Credit rating agencies have downgraded the vast majority of the sector, which is impacting the availability of credit as well as its cost. For example, Williams Companies and its MLP Williams Partners (NYSE: WPZ) both had their credit ratings downgraded in January, with Williams Companies' credit rating cut from Baa3 to Ba1, while Williams Partners was downgraded from Baa2 to Baa3. The companies were downgraded because of the belief that their financial leverage won't decline sufficiently to support their previous ratings because of a more challenging operating environment.

That downgrade sent Williams Companies' credit into junk territory, which will increase its borrowing costs significantly. That's a potentially big issue, because Williams and Energy Transfer Equity are borrowing $6 billion to fund the cash portion of the merger transaction. That funding was secured through a senior secured credit facility that will be provided to the company for up to two years at an interest rate that's capped at 5.5%. It's the short-term nature of the loan that's an issue, because the companies will need to find a more permanent debt solution in the very near term. That's a problem because Williams' sub-investment grade credit rating has the potential to significantly increase its borrowing costs when the company goes to refinance this debt.

It's this increased cost of capital -- not just to refinance the bridge loan, but to fund future capital investments such as the $5 billion that Energy Transfer Equity projected would need to be invested to capture the merger synergies -- that has taken away the bulk of the merger synergies. In other words, the expectation of a dramatically enhanced credit profile has not only gone by the wayside, but the combined credit profile has instead significantly deteriorated in large part due to the $6 billion in incremental debt needed to fund the cash portion of this deal.

Investor takeaway
The implosion of the energy market over the past few months has taken away nearly all of the synergy potential of the proposed Energy Transfer Equity/Williams Companies merger. This is making it much less likely that this deal will create much, if any, value for investors unless both oil prices and credit availability improve dramatically.