Completing the rest of its construction without any hiccups, expanding beyond its current imprint, and making the company's corporate structure easier to understand will all help Cheniere's stock rise.

The term volatile may be a bit of an understatement for shares of Cheniere Energy (LNG -5.00%). For the past several years, Wall Street sentiment has changed on a dime as investor optimism for the U.S.' first LNG export facility has gone from a harebrained idea to a debt-laden speculative bet to an actual operating company. Toss in a few high-profile activist investors and short-sellers and we have a pretty tumultuous stock. 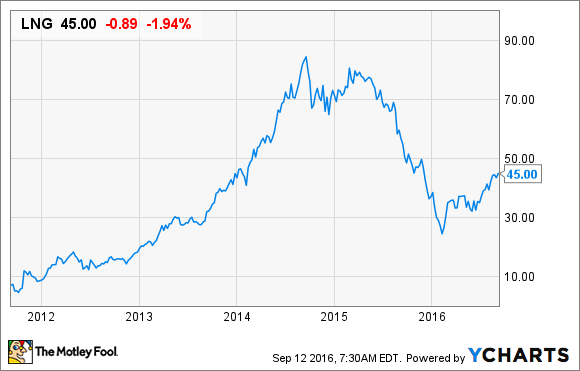 Much of this, though, has to do with speculation. For those interested in investing for the longer term, you need to ignore much of this stuff. Instead, here are three things investors should watch for because they would help Cheniere Energy's stock to rise.

Sabine Pass and Corpus Christi facilities get completed ahead of time

Right now, all of Cheniere Energy's earnings power comes from one liquefaction train from its Sabine Pass facility in Louisiana up and running. This represents a relatively small fraction of the seven liquefaction trains that are under construction at both Sabine Pass and its other facility in Corpus Christi, Texas. It's important for the company's long-term future that it proves the company can be a reliable operator of these facilities, but right now, the biggest priority remains getting all of these liquefaction trains in operation on time and on budget.

The faster these facilities get up and running, the quicker the company can start generating cash and start paying back all of those loans the company took out to complete the facility. In fact, Cheniere Energy itself won't see much of the cash from the facility until its subsidiary Cheniere Energy Partners (CQP -3.86%) pays back some of its debt.

There always have been lingering questions about Cheniere Energy's ability to execute on its strategy since it has been forced to pivot so many times before. If it could get these facilities functioning ahead of time and give it some extra time to pay down those debts before they come due, it would help to put some of these fears to bed.

Cheniere Energy's current development plan has a total of seven liquefaction trains, but there are options for another four trains that would significantly boost the company's total export capacity. Today, two of those expansion proposals are fully permitted and are awaiting final investment decision, and there are another two under review. If the company were to give the green light for these projects, then it would likely lead to much higher earnings.

Before getting too excited about these expansion plans, there are two things to consider. The first is that management may pump the brakes on these expansion plans for a while. One of the reasons for former CEO and founder Charif Souki's ouster as the head of Cheniere was his aggressive growth plan. Newly minted CEO Jack Fusco was specifically brought in to manage the company somewhat under the premise that he would focus more on getting its current facilities running and profitable before pursuing too much growth too quickly.

The other thing to consider is that even if the company gives these projects the green light, then it will take years before they are online and it will take an immense amount of patience from investors to realize the benefits. Then again, Cheniere Energy investors have already been a pretty patient bunch as they have waited years for the company to be in its current state.

This seems like it might not have that much of an impact on Cheniere's stock price, but those who have taken a deeper look at Cheniere's finances and corporate structure have probably come away scratching their heads. When that happens, it can make many potential investors apprehensive.

For the sake of investors, it would be much easier to understand if all assets of the company were held by a single entity, and if the company could somehow buy out the remaining stake of Cheniere Energy Partners Holdings such that the company follows a more traditional limited partner/general partner corporate structure that is so common among master limited partnerships.

Removing layers of complexity would make it easier for investors to understand this company, and would likely give them more confidence in determining whether this stock is right for them.

Much of Cheniere Energy's business is sheltered from commodity prices because most of its revenue comes from fixed fees, but there is a little variability that will make some on Wall Street trade this stock with commodity prices. For longer-term investors, though, the larger focus needs to be on getting the rest of its liquefaction capacity up and running smoothly, expanding its current offering even more, and removing some of the complexity that makes it hard to understand the company's finances. If Cheniere Energy were to do these things, then don't be surprised if the stock rises considerably.

Like Dividends and Growth? These 2 Energy Stocks Can Satisfy Both Cravings.
366%