Earlier this month, Cheniere Energy (NYSEMKT:LNG) announced that it was going to make an Initial Public Offering for Cheniere Energy Partners LP Holdings, LLC. If you own shares in any part of Cheniere or may be considering owning shares, then you may be asking yourself how the company will have three separate publicly traded entities all centered on a single LNG terminal. It's a pretty complex maze, but let's break it down so you can better understand how your investment in the Cheniere Energy suite generates income.

Where's the money?
The easiest way for anyone to understand how the fleet of Cheniere energy companies works is to start with where the company makes money: the LNG terminals and the associated pipelines. Right now the Sabine Pass LNG terminal, all of its pipeline assets, and the $250 million in take-or-pay contracts for the LNG regassification facility signed with both Total (NYSE:TTE) and Chevron (NYSE:CVX) are currently held by Cheniere Energy Partners (NYSEMKT:CQP). 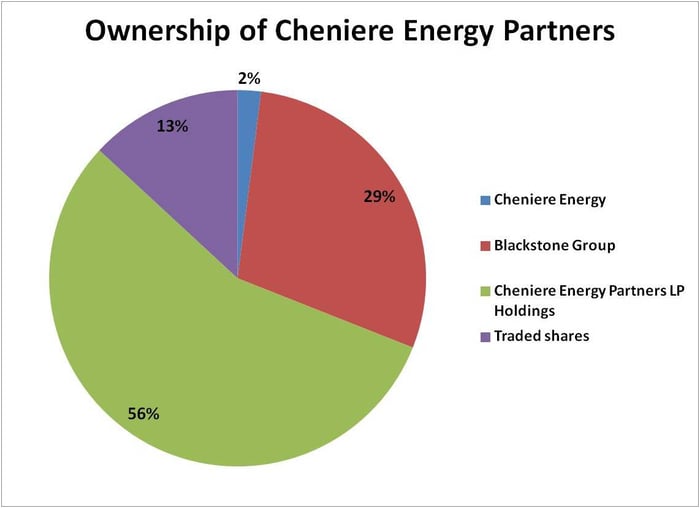 Of the 365 million shares of Cheniere Energy Partners distributed to these various entities, only 21% are currently entitled to the distributions the company pays out. By Aug. 9, 2017, or after the third liquefaction train comes online at the facility, which ever comes first, any Class B shares owned by Blackstone Group and Cheniere Energy Partners LP Holdings -- 39.7% of shares outstanding -- will convert to common shares and receive distributions as well. The remaining 37% shares are subordinated shares owned by the holding company, which will start to receive distributions once the MLP generates enough distributable cash for all other shares as well as pay off the debts incurred as the company paid distributions before it was generating cash flow.

The supreme leader
What about the head of the company, Cheniere Energy? This part of the company will generate its income from the general partnership stake in the MLP, as well as any dividends it may receive from the holding company. As the MLP starts to generate surplus operational cash and increase its distribution, then Cheniere Energy will receive incentive distribution rights based on this structure.

What this means is that the total share of the distributions from the MLP will increase early on and the general partner will not grow as quickly. Once those subordinated share obligations are met, though, the general partner will receive a larger and larger share of the the distributable cash flow as those incentive distribution rights kick in. Also, Cheniere Energy is the part of the company that owns the second proposed LNG facility at Corpus Christi, Texas. Unless the company decides to transfer ownership to one of its subsidiaries, then any income generated by that facility will go directly to Cheniere Energy.

What a Fool believes
It's not easy keeping the Cheniere Energy story straight with so many different entities all trying to carve up a piece of one LNG terminal, but investors in any iteration of Cheniere should know how that part of the company makes money going forward. Early on, the holding company may be the more attractive pick, but as those subordinated shares are fulfilled then the general partner could be the best bet for the future of the company.