Some beaten-down biotechs might be worth the risk, while others are better left alone.

Biotech stocks with share prices under $5 are generally too dangerous to own. Even so, some of these dirt-cheap biotechs can, on rare occasion, represent compelling growth opportunities for risk-tolerant investors. With this in mind, here's a look at why you may want to buy Amarin Corp. (AMRN 2.52%) and Geron Corp. (GERN 2.68%), but avoid MannKind Corp. (MNKD 3.43%) right now.

Don't let the pessimism fool you -- Amarin is grossly undervalued

Amarin's first interim efficacy analysis for fish oil pill Vascepa's REDUCE-IT cardiovascular outcomes study has now come and gone without much fanfare. While the trial wasn't halted early for efficacy reasons -- as some investors were apparently hoping -- the trial also wasn't stopped for futility. As such, Amarin will sally forth toward a second interim analysis that's expected to occur by mid-2017.

While it's impossible to tell if Vascepa is even trending toward significance in terms of its ability to reduce the likelihood of deadly cardiovascular events in this large outcomes study, the company is arguably deeply undervalued relative to its near-term growth prospects. Because of a favorable ruling allowing Amarin to talk to doctors about Vascepa's benefits in patients with moderately high triglyceride levels (as opposed to just those with severely high triglyceride levels), the Street is forecasting the drug's sales to basically double from 2015 over the next two years. The net result is that Amarin's shares are trading at less than three times the company's projected 2017 revenue, which is rock bottom for a revenue-generating biotech.

Now, the catch is that Amarin is probably going to have to continue to raise capital to fund the cash-intensive REDUCE-IT trial. After all, Vascepa's growing sales don't appear to be high enough to fully cover the cost of this trial, and REDUCE-IT isn't scheduled to conclude until 2018. That said, management has enough of a cash runway at the moment to execute capital raises in a judicious manner that should minimize the impact on its share price going forward.

Geron's stock is down, but not out 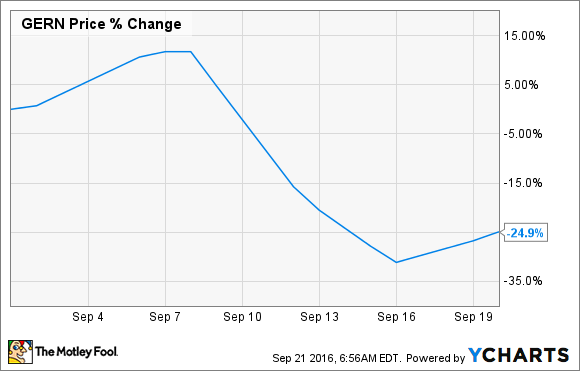 The key concern is that imetelstat doesn't seem to be exhibiting quite the same level of clinical benefit in MF in its mid-stage trial as its earlier pilot study produced. Turning to the specifics, J&J's subsidiary Janssen Biotech, which is conducting the trials, decided to close patient enrollment in the 4.7 mg/kg dosing arm of the study. And while Janssen is continuing to evaluate the higher 9.4 mg/kg dosing arm of imetelstat in MF due to an "encouraging trend in efficacy," it's worth noting that this arm also didn't meet the protocol defined interim criteria yet, according to the press release.

The good news is that imetelstat appears to be producing a more pronounced clinical benefit in MDS, although neither Geron nor J&J provided many details on the drug's progress in this separate study. Going forward, J&J is expected to provide another clinical update for this trial in the second quarter of 2017, followed by a decision on whether or not to advance imetelstat into a late-stage study for MDS by mid-2017.

Although the market clearly expected imetelstat to produce much clearer signs of efficacy in perhaps both MF and MDS, this dramatic sell-off probably isn't warranted for two reasons. First off, these high-value indications both remain in play at this stage. J&J, after all, wouldn't be wasting its time and resources if this initial data didn't show at least some promising signs of efficacy.

Next up, Geron is in a fairly strong financial position as a result of its partnership with J&J. This situation could change if Geron decides to diversify its pipeline. But that event seems highly unlikely at this point given that the biotech is basically structured (skeleton crew for staff, no real internal R&D capabilities) for a quick sale, not conducting clinical trials.

All told, Geron's main value driver imetelstat may not be performing up to the Street's high expectations, but it also hasn't crashed and burned just yet. And with a cash runway that should extend well beyond imetelstat's forthcoming clinical updates for MF and MDS, this biotech looks like an intriguing speculative buy.

MannKind is taking on water

MannKind's value proposition centers around its inhaled insulin product, Afrezza. Afrezza was originally billed as a potential megablockbuster due to the enormous size of the diabetes market and the notion that patients would flock to an inhalable insulin. However, the product faced several hurdles to its commercial launch right out of the gate, such as a lukewarm response from payers and burdensome lung-function tests, which resulted in unexpectedly poor sales. In turn, MannKind's marketing partner for Afrezza, Sanofi, decided to terminate its marketing agreement earlier this year.

As it now stands, MannKind is tasked with reviving Afrezza's anemic commercial launch on a shoestring budget. Making matters worse, this biotech is on track to run out of cash by mid-2017, and the company's sub-$1 share price may preclude it from tapping the balance of its $50 million of at-the-market stock offerings. And even with roughly $30 million remaining under its loan agreement with The Mann Group, MannKind may struggle to keep its doors open beyond next year.

Long story short, MannKind desperately needs Afrezza's sales to grow at an exponential rate in order to stave off bankruptcy, and that no longer looks like a real possibility without Sanofi's backing. That's why investors may want to shy away from this name for the time being.

George Budwell has no position in any stocks mentioned. The Motley Fool owns shares of and recommends Johnson and Johnson. We Fools may not all hold the same opinions, but we all believe that considering a diverse range of insights makes us better investors. The Motley Fool has a disclosure policy.

Why Investors Were Giving Amarin the Cold Shoulder Today
376%