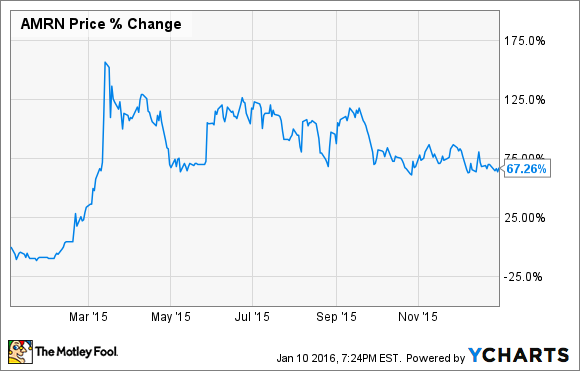 What: Shares of the small-cap biopharma Amarin Corp. (AMRN 2.48%) gained nearly 70% in 2015, according to data provided by S&P Capital IQ. The Irish drugmaker's strong rebound from an abysmal 2014 was the result of three positive catalysts unfolding for its prescription fish oil pill Vascepa, indicated for severely high triglyceride levels (≥500 mg/dL), over the course of the year.

Firstly, Vascepa's annual sales are expected to jump by around 45% to $78 million, when the company closes its book for 2015 in the next few months. While that's still nowhere near the blockbuster figures investors were originally hoping for based on the commercial performance of GlaxoSmithKline's competing pill, Lovaza, this improving sales momentum shows that Vascepa is far from a bust.

Next up, the company was successful in its legal battle against the FDA regarding Vascepa's New Chemical Entity status -- retroactively enacting a five-year period of exclusivity from the time of approval, meaning exclusivity won't end until July 25, 2017.

Last but certainly not least, Amarin won a second critical legal fight against the FDA centering on the company's ability to talk to doctors about unapproved uses of the drug based on the completed clinical studies examining its effectiveness in patients with only moderately high triglyceride levels.

So what: The Street thinks Amarin's expanded ability to promote Vascepa could boost the drug's sales by a healthy 74% in 2016, helping to dramatically lower the company's net loss per share for the year.

Now what: Looking ahead, Amarin's story is squarely focused on the outcome of the ongoing cardiovascular outcomes study called "REDUCE-IT" that's currently on track to wrap up in 2017 and produce top-line results in early 2018. The core issue is that if Vascepa does indeed show a significant cardiovascular benefit via REDUCE-IT, it will have a much better chance at producing blockbuster type sales akin to Lovaza.

The downside is that Amarin is going to have to raise a good chunk of cash to complete REDUCE-IT, perhaps before the end of 2016. So, with the company's share price below $2, Amarin may have to perform a reverse split to both meet the listing requirements of the Nasdaq and execute a secondary offering large enough to shore up its balance sheet for the long-haul. All told, investors may want to hold off on buying this stock right now.