While oil stocks in general are relatively correlated to oil prices, not all oil companies are the same. Some have just as much upside in a rising oil price environment without the same level of risk as rival producers. That is certainly the case when drilling down into the risks and opportunities of large U.S. exploration and production companies Apache (NASDAQ:APA) and Marathon Oil (NYSE:MRO), which makes one of them a much better buy right now.

While the oil market is improving, investors should still consider a producer's downside risk. That is why it is necessary to drill down into an oil company's balance sheet to make sure there isn't any hidden danger. Here's how these two compare:

While Marathon Oil is roughly half the size of Apache, it has almost as much debt. That is why its credit rating is lower, with Moody's rating it below investment grade. In downgrading the company's credit to junk, the rating agency cited the likely "considerable deterioration" in its credit metrics this year due to weak oil prices. Furthermore, it warned that there was some refinancing risk on the horizon due to upcoming debt maturities in 2017 and 2018 that the company might need to address with sizable asset sales. While Marathon Oil has completed more than $1 billion in non-core asset sales this year, it also spent $888 million to acquire assets in the STACK play of Oklahoma.

Apache, on the other hand, has less leverage and therefore stronger credit thanks to asset sales completed before the oil market downturn. Also, after generating excess cash flow last quarter, its net debt improved, which puts it on pace to meet its goal to end 2016 with net debt at or below where it ended last year.

With a stronger credit rating and lower leverage, Apache clearly has the stronger balance sheet.

Battle of the asset bases

Another important factor for investors to consider is an oil company's diversification. There are two reasons why this is important. First, it reduces overall risk should production in a key geography go offline due to weather issues, political unrest, or other outside factors. Second, it mutes some exposure to oil price dislocations given that U.S. and Canadian oil prices often trade at a discount to the global oil benchmark price. Here's how these two stack up: 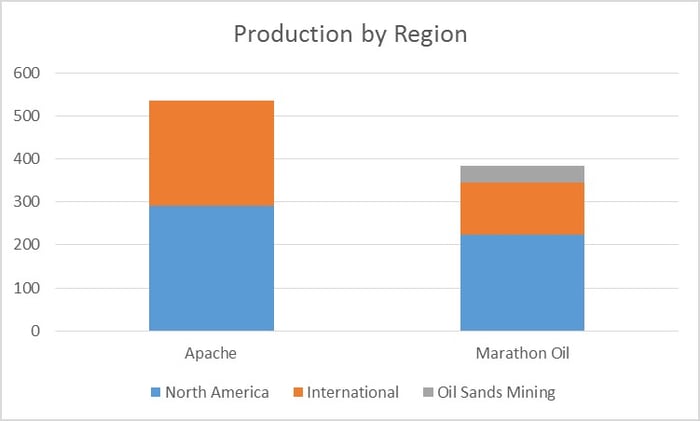 As that chart shows, Apache not only produces a lot more oil and gas than Marathon but it splits that production evenly between North America and the rest of the world. That diversification has proven to be invaluable during the downturn, with Apache's international production holding up better than its higher decline production from North American shale. Last quarter, for example, Apache's global production was up 4% against a 6% decline in onshore production, leading to a 2% overall decline.

Contrast this with Marathon Oil, which saw its production decline by nearly 6% due in part to its greater exposure to North American shale. Last quarter, for example, Marathon's North American production was down 13% adjusted for asset sales, which it partially offset with an 11% increase from international production. In addition, due to the unrest in Libya, Marathon has not produced a drop of oil from the country in more than a year, which is having a greater impact on its overall production than it would for a larger, more diversified company like Apache.

While both companies grew global production over the past year, they see U.S. shale plays driving growth going forward. Marathon Oil, for example, believes it is sitting on upwards of 2.2 billion barrels of oil equivalent resource potential in its STACK/SCOOP plays of Oklahoma. These are also highly profitable wells, with returns north of 40% at $50 oil. In addition to that, the company controls solid positions in the Eagle Ford and Bakken shales, which have substantial remaining development potential.

Apache, likewise, has compelling growth potential in Oklahoma. However, it is more excited about its potential in the Permian Basin of Texas, and particularly its recently discovered Alpine High play. The company believes that there are more than 3 billion barrels of oil and 75 trillion cubic feet of gas in just two of the five rock layers underneath its acreage. While the company has not completely delineated its full potential, it believes that it has decades worth of profitable drilling opportunities at more than $50 oil.

Both companies have very compelling upside, so this one could go either way, especially since Apache's Alpine High is a recent discovery that might not be as big as it thinks.

While Marathon Oil has a lot of upside, its weaker balance sheet and current portfolio could be a liability if oil takes another dive and stays low for a while. That is why, between the two, Apache is the better buy right now. Its balance sheet and portfolio are better suited to handle the volatile oil market, and with compelling opportunities in the Permian and Oklahoma, it has plenty of upside to higher oil prices.