Commodity producers like oil companies are known as price takers because they are forced to take the market price for the oil they produce. As a result, any fluctuation in the price of crude has a rather direct impact on their bottom line. That said, the price of crude is not one single price at any time. Instead, there are multiple prices for crude, depending on the type and location. Often, the differences in the prices of various varieties of crude are minor, but that's not always the case, so it's important for investors to know the oil price that makes up the bulk of a company's oil production -- it can make a big difference in producer profitability during times of market dislocation.

The most common global crude oil benchmark is Brent, which refers to oil extracted from the North Sea that is sweet and light (with sweet relating to oil having less than 0.42% sulfur content, while light refers to oil that freely flows at room temperature). Because of the characteristics of Brent, it's easier to refine, which often causes it to sell for a premium to heavy sour oils.

Another major oil price is the U.S. oil benchmark West Texas Intermediate, or WTI, which is an even lighter and sweeter crude than Brent. It is the standard benchmark price for producers in the U.S., especially those in Texas' legendary Permian Basin. Meanwhile, at the other end of the spectrum is Western Canadian Select, or WCS, which is heavy oil made mostly of bitumen from Canada's oil sands. In addition to that, other oil prices include TOCOM, which is Middle East crudes that trade on the Tokyo Commodity Exchange, Nigeria's Bonny Light, and Mexico's Maya crude, which is a heavy sour oil.

The crude reality of crude pricing

It's important to understand these oil prices because they can have an impact on oil companies. For example, while Brent and WTI are similar types of oil, they do not always trade at a similar price. In fact, thanks to surging U.S. production and limited domestic refining capacity, WTI typically trades at a discount to Brent: 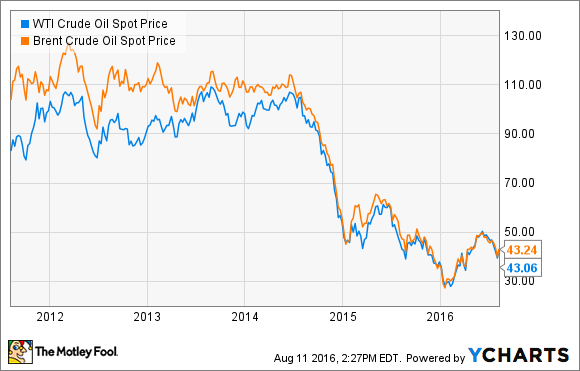 Before the 2014 collapse in oil prices, that discount was quite wide, and at one point, it was more than $20 a barrel, due in part to the prior ban on exporting domestically produced oil. That meant producers selling their oil at Brent had a competitive advantage because they earned more per barrel than rivals selling oil at the WTI price.

For example, in 2012, when Brent sold at a hefty premium to WTI, global oil giant ConocoPhillips (NYSE:COP) realized an average of $105.72 per barrel, while U.S.-focused EOG Resources (NYSE:EOG) only realized $98.02 per barrel for its oil. While that might not seem like a big difference, the $7.70 per barrel when spread across EOG Resources' 162,700 barrels per day of oil production would have resulted in an incremental $457 million of revenue, which would have boosted EOG's top line by 4%.

Meanwhile, producers in Canada often have to deal with a very wide differential between WTI and WCS. That differential is partially due to that country's lack of pipeline capacity, which can drive WCS down when a pipeline goes out of commission, or if there's a glut of heavy oil in storage. That is what happened during the first quarter of this year when WCS plunged to less than $20 a barrel. In fact, ConocoPhillips' Canadian production averaged $19.03 per barrel in the first quarter, compared to $33.27 for its WTI oil. While that low price for its Canadian oil hurt, ConocoPhillips' diversification muted much of the impact, evidenced by the fact that it realized an average of $31.47 per barrel during the quarter. Conoco's Canadian oil sands joint venture partner Cenovus Energy (NYSE:CVE), on the other hand, realized only $15.91 per barrel during the first quarter because virtually all of its oil gets priced at WCS. Because of that, Cenovus lost $2.13 for every barrel of oil it produced. While Cenovus Energy's hedges and its refining arm enabled it to generate some cash flow, the company's Canadian-focused production suffers from the fact that it prices its oil at WCS instead of another benchmark price.

Crude oil might trade on the global market, but it's often priced locally, which can have a meaningful impact on producer profits. While that difference might not matter much during the good times, it can be a significant weight during periods of market stress, which was the fate of Cenovus Energy earlier this year.