The oil market downturn forced many producers to cut back investment spending significantly. As a result, most producers curtailed exploration spending, and instead focused their limited capital dollars on investments that would yield production and cash flow in the very near term. Apache (NASDAQ:APA), on the other hand, took a different approach, quietly pouring money into an exploration project in an area that most of its peers had overlooked. The result is the discovery of the oil-rich Alpine High resource play in western Texas.

Drilling down into Alpine High

Apache's Alpine High is in the southern portion of the Delaware Basin, which is on the west side of the Permian Basin. The company's acreage is on the map in the below slide: 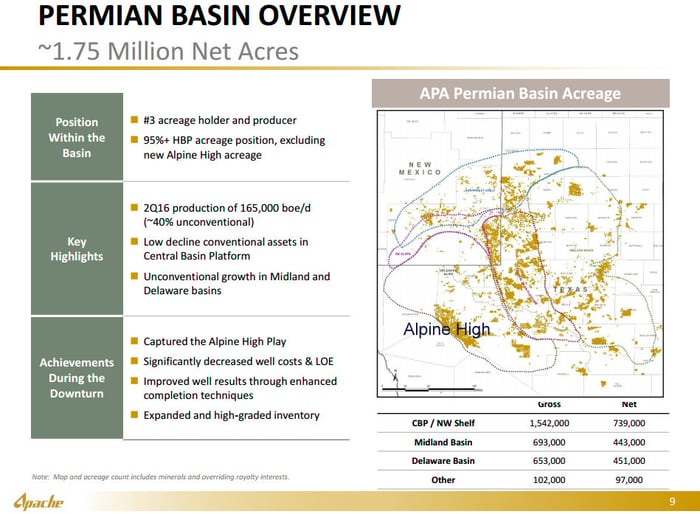 Apache methodically secured 307,000 contiguous net acres in the play over the past two years at an average cost of just $1,300 an acre. That position represents the vast majority of the play. Furthermore, the company acquired that land for a fraction of the price its peers are paying for acreage in the Permian Basin these days. For example, Parsley Energy (NYSE:PE) recently acquired 30,000 acres in the Southern Delaware Basin for $280.4 million in cash, or roughly $9,000 an acre. In addition to that, Parsley Energy bought just over 9,000 net acres in the Midland Basin for a whopping $400 million, or more than $43,000 an acre. Oil companies like Parsley Energy have been very active in acquiring acreage in the Permian this year, resulting in the average selling price jumping to more than $25,000 an acre for land in prime drilling areas.

Apache, on the other hand, was able to secure the drilling rights to Alpine High for a bargain price because the industry had several misconceptions about the region, including the view that it was a gas play and that it had too much clay. Apache, however, found it to not only be rich in oil and NGLs but that it did not have much clay at all. What that meant is that it was not only easy to frack, but also produced large volumes of higher-value hydrocarbons. Furthermore, oil and gas saturated the rocks in this region, with Apache's initial estimate that its acreage alone contains 75 trillion cubic feet of gas and 3 billion barrels of oil. That resource estimate, however, covers just two of the five distinct rock formations underlying its acreage position, with the company seeing significant oil potential in the other three formations as well.

Where does Apache go from here?

Now that the word is out on Alpine High's potential, Apache plans to accelerate the development of its acreage position right away. As such, it is increasing its 2016 capex budget by $200 million, raising it to $2 billion. The company plans to spend more than a quarter of that capex on the Alpine High play. Longer term, Apache estimates that it can drill between 2,000 to 3,000 future wells on its acreage just targeting two of the five formations, which is enough inventory to last it over 20 years. That said, it plans to continue testing the play to see if it can develop all five zones as well as to define the extent of the play, which could significantly extend the development time frame.

Apache proved that there's still plenty of potential oil discoveries for companies willing to take a calculated risk. While it took a lot of hard work and effort, the company now has a major growth driver that can create tremendous value for its investors in the years ahead. Best of all, Apache did not have to pay that much for the discovery, which puts it well ahead of its acquisitive peers that are bidding up acreage to secure their future growth.