When Anheuser-Busch InBev (NYSE:BUD) sought Justice Department approval to acquire SABMiller in a $100 billion merger, one of the stipulations it agreed to was it would stop trying to snuff out craft beer competition. The global brewing giant had been buying up craft brewers and their distributors, while encouraging others to carry only Anheuser-Busch brands, but the antitrust agency said if it wanted the deal to go through, it would have to halt such practices. 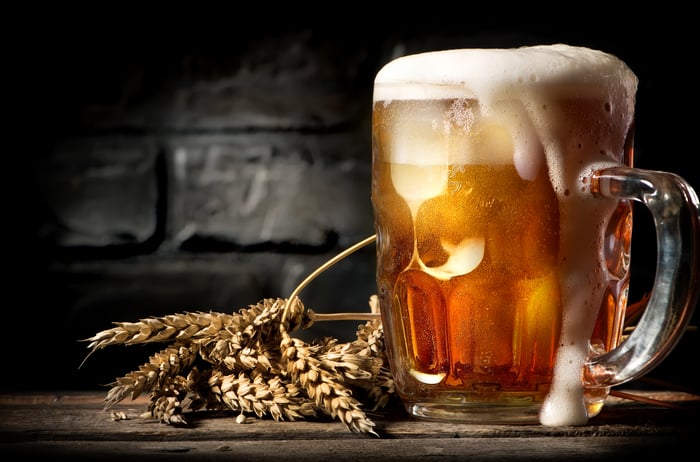 Although A-B InBev assented to the demand, apparently the macro brewer has found a way to comply with the dictate while also doing an end run around it. A seemingly innocuous acquisition of two home-brewing suppliers could be Anheuser-Busch's most pointed threat to craft beer industry yet.

According to the Brewers Association (which represents the craft beer industry), with more than 4,200 craft breweries operating in the U.S. today, an 18% increase from the year-ago period, there are more breweries in America now than ever before and there are many more planning to open in the future.

Many, if not most of those craft breweries started off as a homebrewers crafting beer in their basement 5 gallons at a time, and giving away the product to family and friends. For example, Dogfish Head Brewery founder Sam Calagione first brewed beer at home, then opened a brew pub in Rehoboth Beach, Delaware, in 1995. Today it is one of the top 20 craft brewers in the country. Same with New Belgium Brewing, which got its start in Fort Collins, Colorado.

And, of course, Boston Beer (NYSE:SAM), which is arguably still the face of the craft beer industry despite its size, began in founder Jim Koch's parents' kitchen in Boston. Last year it shipped 4.2 million barrels and generated almost $1 billion in revenue. Just a fraction of that business is the kind of success many home and smaller craft brewers aspire to. The Brewers Association says craft beer now accounts for more than 12% of all beer produced. Where mass-produced suds barely register any growth at all, craft breweries have been growing volumes at double-digit rates.

Anheuser-Busch hasn't been blind to the trend. It launched its Shock Top "craft" beer brand in response to the success MillerCoors -- now wholly owned by Molson Coors (NYSE:TAP) following A-B's merger with Miller -- enjoyed with its Blue Moon brand. It also began acquiring over a dozen craft breweries, too, including Goose Island Brewery, Elysian Brewing, and its most recent acquisition earlier this year of Devil's Backbone Brewing.

That's when A-B InBev also decided it needed to game the system in its favor. A year ago it bought two Colorado-based distributors and was quoted as saying, "American Eagle currently sells approximately 20 non-AB brands. We are seeking to keep a handful of local brands, pending supplier approval." A lot of craft beers felt distributors were going to drop them.

A-B InBev then began incentivizing other distributors to carry only its brands, agreeing to pay most of their marketing costs if 90% or more of the brands they carried were Anheuser-Busch brands. That's when the Justice Department stepped in with its investigation and delivered its cease-and-desist ultimatum.

Now Anheuser-Busch has purchased the two biggest suppliers to the homebrew market, Northern Brewer and Midwest Supplies, through its venture capital arm, ZX Ventures, which describes itself as a global disruptive growth group and incubator. The deal with the suppliers was for an undisclosed sum.

Northern Brewer founder Chris Farley wrote on his company's blog that the deal is all about growing the business and that both management and the business will remain independent. Yet by Anheuser-Busch effectively acquiring the suppliers that many craft brewers today once used to get their start comes with it certain implications. The simple fact of the matter is that AB InBev will have an even stronger hold on beer consumption in the U.S.

Many big craft breweries got started in the kitchens, basements, and college dorm rooms of their founders, buying gear from the biggest suppliers in the market. Image source: Flickr user Joe Lipson.

Northern Brewer is estimated to generate some $50 million in annual sales, meaning that at a little more than 6% of the industry total, the industry remains highly fragmented.

Still, it's possible the purchase won't sit well with many homebrewers who make their own beer because of a love for the craft behind it. While Northern Brewer's distribution will improve as a result of the acquisition, making equipment available to more people, homebrewers might not like their money supporting Anheuser-Busch or mass-produced beer, which is anathema to the craft brew ethic.

Of course, we've heard complaints before when a craft brewer sells out to a mass beer maker. Not only has A-B been buying craft breweries, but so has Heineken, which acquired a 50% stake in Lagunitas, and Constellation Brands, which spent $1 billion buying Ballast Point Brewing & Spirits.

Ultimately, homebrewers may not care where they get their supplies from so long as they're able to continue making good, small-batch beer. And that means Anheuser-Busch InBev will have wormed its way into the craft beer market by buying up the stepping stone that many brewers utilize before they go pro.