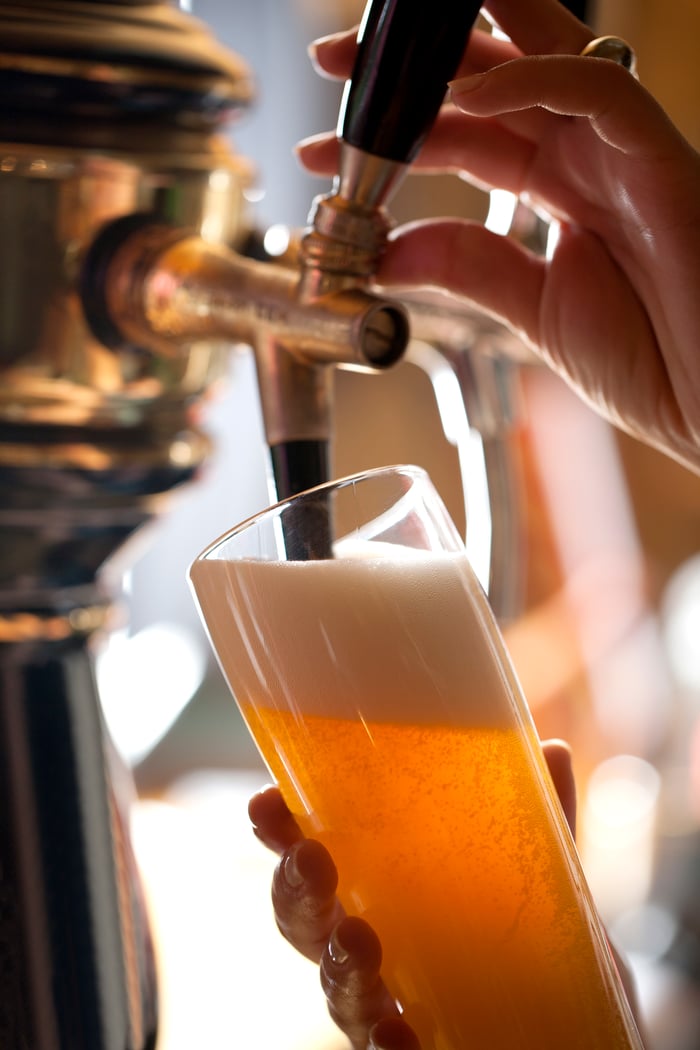 Is craft beer dying? There's no denying the industry is slowing as craft beer sales this year have risen at less than half the rate they did a year ago. And with more craft breweries in existence now than at any time in the past, it may be a case of the industry simply being diluted by its own success. It certainly seems like there's reason to worry.

The market analysts at IRI say craft beer sales were up only 6.5% year to date through May 15, compared to better-than-17% growth in the same period last year.

Moreover, Boston Beer (NYSE:SAM), which arguably remains the face of the craft beer industry, reported yet another quarter of disappointing sales in April. First-quarter revenue fell 5% to $188.8 million on a 6% decline in core shipment volume and a 5% drop in depletions, or sales from distributors to retailers, which are considered a reliable proxy for consumer demand. Its flagship Samuel Adams brand remains in a deep funk, and Chairman Jim Koch admits the company lost market share in the period.

It's not alone, as the Brewers Association has noted that MillerCoors' Blue Moon and Anheuser-Busch InBev's (NYSE:BUD) Shock Top brands are also going flat, with year-to-date sales down 4% and 9%, respectively.

But despite the cloudy overall picture, small batch brewers have never been more popular, both with drinkers and with other brewers, too. Anheuser-Busch has been on a shopping spree, acquiring almost a dozen craft beers since 2011; SABMiller (NASDAQOTH: SBMRY) bought U.K.-based brewer Meantime; Heineken (OTC:HEINY) bought half of Lagunitas; and Constellation Brands (NYSE:STZ) spent $1 billion to buy Ballast Point Brewing & Spirits.

Have we become saturated with craft beer? Are there just too many options? After all, there are so many craft adult beverages to choose from these days -- everything from hard cider and soda to now even hard water -- that maybe drinkers are just giving up on craft beer.

Not quite. The Brewers Association notes that if you remove just Blue Moon and Shock Top from the IRI data set, craft beer growth jumps to 9%. And industry site BevNet says that if you also subtract Boston Beer, New Belgium Brewing, and Sierra Nevada from the count, growth actually jumps to 16%.

The Brewers Association reported in March that small and independent craft brewers represented 12% of the overall beer industry in 2015, producing 24.5 million barrels that year, a 13% rise in volume.

What that means is that true craft beer isn't hurting -- it's just the "crafty" beer made by the biggest brewers that is falling out of favor.

Although Boston Beer is still considered a "craft brewer" under the Brewers Association definition, that's only because the trade group keeps moving the goalposts to ensure it remains a part of the industry.

To be considered craft, a brewer must be:

Boston Beer still meets those criteria, but that 6 million-barrel limitation used to be 2 million until just a couple of years ago -- when Boston Beer's production started bumping up against the ceiling, causing the trade group to raise the threshold.

In reality, while the brewer and co-founder Koch still do a lot for the craft beer industry, it's not really a craft brewer anymore. When you look at how the smallest brewers are doing, they look pretty healthy.

There's little doubt there may be a bit of fatigue setting in as more breweries large and small jump on the bandwagon. But it's the megabrewers like Anheuser-Busch and Miller that should be worrying about this trend. They're the ones that latched onto the craft beer segment as the salve to the declining sales volumes they're still experiencing with their mass-brewed suds.

Although Boston Beer is fortunate that it remains inextricably linked to the craft, likely giving it the wherewithal to weather the storm, even big craft brewers like it should take heed. For the rest of the craft beer industry, however, growth is still frothy, and that's something worth toasting.