Here's a look at the five best-performing high-yield dividend stocks for 2016 (as of November), how each was able to produce such outsized gains over the broader market, and whether these gains signal that it's time to buy or to stay away.

The big winners so far

The first thing that jumps out from this list is that three of the companies are master limited partnerships in the coal business: SunCoke Energy Partners and CNX Coal Resources LP are MLP spinoffs of SunCoke Energy (NYSE: SXC) and CONSOL Energy (NYSE: CNX), respectively, while Natural Resource Partners' largest revenue source is royalty rights on coal properties across the U.S.

CONE Midstream Partners is a master limited partnership formed by CONSOL Energy and Noble Energy (NYSE: NBL); it focuses on natural gas gathering and processing for CONSOL and Noble's acreage in the Marcellus and Utica shale basins in the northeastern United States.

The outlier in this group is Quad/Graphics. The company is a specialized commercial printer that generates a majority of its revenue from printing retail inserts, magazines, catalogs, and direct mail.

Even though these companies are in somewhat disparate businesses, they share a reason for such strong performance in 2016. If we back the lens out a bit further, we see that most of those gains have come after long, sharp price declines that started to turn around in January. With the exception of CNX Coal Resources, which held its initial public offering in May of 2015, the companies here are reversing multiple-year declines: 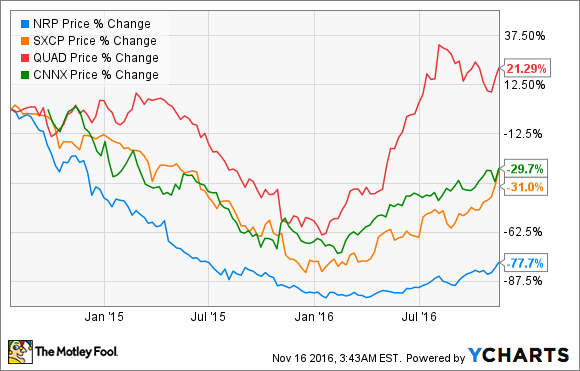 CONE Midstream's big uptick this year has to do with improving natural gas prices and drilling activity in the Marcellus region. Gathering and processing assets are some of the most price- and volume-sensitive energy infrastructure and logistics assets, since they are linked to individual wells. As prices have started to pick back up, so too have volumes in CONE's system that have led to improving financials this quarter.

Quad/Graphics' issues come down to the fact that the printing business simply isn't what it used to be. Even after making 12 major acquisitions over the past six years to consolidate the industry, Quad's sales peaked in 2014, and 2016 revenue is expected to be down 8% from that high mark. Printing capacity across the entire industry is down, and pricing power is deteriorating. Quad, though, has been able to offset these declines this year by significantly lowering costs and lowering its capital working requirements to generate better bottom-line results.

Clearly, things are starting to look up for these companies, but things couldn't have looked much worse several months ago. Coal markets have started to rebalance as oversupply has been reduced, thanks to some mines closing. And increasing natural gas along the U.S. Gulf Coast, as new petrochemical plants and LNG export terminals have come online, has boosted demand all the way up in the Marcellus and Utica shale basins. Each of those commodity-related companies, though, has an Achilles' heel that could mean long-term gains may not materialize:

For Quad/Graphics, the gains in operational efficiency are a good sign because they improve the company's free cash flow situation. With so much overcapacity in the market for commercial printing and a very fragmented market, Quad can use that cash to continue to consolidate the market, hopefully gain back some pricing power, and fight off the long-term trend toward less print media.

If you were able to time the market just right with these companies and you held onto those stocks throughout 2016, then you are probably sitting on pretty large gains. Anyone who has been invested in these companies any longer than that, though, is probably still trying to claw back those massive losses over the past few years.

There are some market forces that suggest these companies are headed for better times ahead, and the high-yield dividends of these companies may not be in as much jeopardy as they were just a few months ago. Still, some of the gains we have seen from these companies could be short-lived, and for the investment thesis for each to play out, a few things out of each company's control will need to go right. Without assurance that this is the case, investors should approach these companies with a bit of caution.