Many income investors focus solely on dividend stocks that have high yields, measuring success based on how much cash they can generate from their investment. Yet even those who focus on stocks with the highest dividends understand that a stock whose price rises in value is better than one whose share price falls, even if the winning stock doesn't have the best-paying dividend. Finding the right company involves focusing on businesses that can generate growth as well as income. The three top performing high-yield stocks in 2016 all have an attractive combination of growth and income, and you don't have to be a dividend investor to appreciate the returns that they've generated so far this year. Let's take a closer look at the three stocks yielding 4% or more that have the best returns to see why they've done so well. 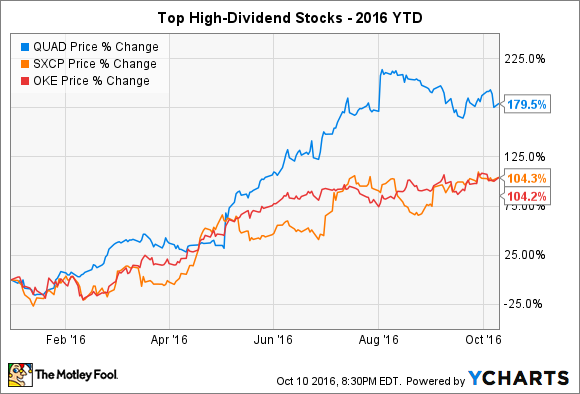 One of the best-performing stocks in the entire stock market so far in 2016 is Quad/Graphics (NYSE:QUAD). It's up almost 180% since the beginning of January, yet even with the big gain in its stock price, Quad/Graphics still carries an impressive dividend yield of 4.7%.

Quad/Graphics specializes in delivering marketing and print services using different media channels to help its clients promote and market their products. Having turned around from a rough 2015, Quad/Graphics has successfully cut its internal costs and found better ways to take advantage of opportunities in an improving economy. Some fear that an organization that still relies in large part on old-style paper magazines could have trouble making the transition to a digital world. Yet through efforts to diversify its revenue and adapt to changing conditions, Quad/Graphics has investors convinced that it can bounce back and defy some of the trends that have worked against it for so long.

2. Stoking returns as strong as steel

Another sector of the economy that has shown signs of a potential recovery is the steel industry. After years of poor fundamental conditions, many steel stocks have rebounded, and SunCoke Energy Partners (NYSE:SXCP) has been one of the best performers, more than doubling so far in 2016. At the same time, its distribution of $0.594 per share has kept its overall yield sky-high at more than 15% based on current share prices.

SunCoke Energy Partners is a master limited partnership that came into the year after being one of the worst performers in 2015. By providing metallurgical and thermal coal as well as the coke material used in steel production, SunCoke Energy Partners did well when the steel industry was thriving, but sluggishness in the global economy hurt its prospects, especially in China. Since then, however, the MLP's general partner and incentive distribution rights holder has suspended its own dividend, revising its capital allocation strategy to help improve its liquidity position. With signs that steel could finally be close to rebounding and with efforts to boost its financial health ongoing, SunCoke Energy Partners has already rewarded investors and could continue to do so in the future.

Finally, the bounce in the energy markets has led to an overall rebound for the entire oil and gas sector of the stock market. One of the best performers has been ONEOK (NYSE:OKE), the Oklahoma-based pipeline operator. It's up 104% so far in 2016, making back a portion of its extensive losses during late 2014 and 2015. It also carries a yield of about 5%.

The thing investors need to understand about ONEOK is that collecting fees by maximizing the volume of transported natural gas is the key to its overall profitability. As such, ONEOK has exposure to the prices of natural gas liquids and regular natural gas, but the company has also done a good job of restructuring contracts to take greater advantage of opportunities in gathering and processing natural gas. The net result has been a more reliable business model that can survive weakness in commodity prices, and investors have rewarded the change with substantial share-price gains.

As valuable as the dividends these companies pay are to shareholders, the share-price appreciation they've enjoyed so far in 2016 has played a much more vital role in their total returns. If things continue to go well for these three companies, then they could add to their impressive performance during the remainder of 2016 and beyond.