Assuming that nothing crazy happens in the next two weeks, there's reason to believe that Bank of America (NYSE:BAC) will turn in a very good fourth-quarter performance. Its earnings have been on an upward trajectory over the past two years, and rising interest rates and trading revenues should catalyze this trend in the final three months of the year.

The Federal Reserve's decision last week to increase interest rates by 25 basis points, or a quarter of a percent, is an auspicious sign for all banks, especially Bank of America. The short-term fed funds rate has been at or just above 0% since 2009, when the Fed lowered it in an effort to combat the financial crisis. 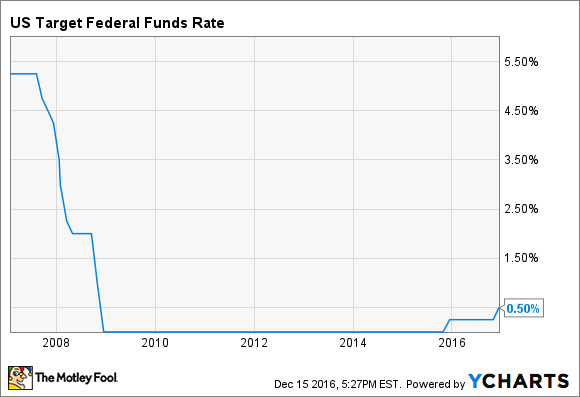 This has weighed heavily on bank revenue and profits. Roughly half of a typical big bank's top line comes from net interest income, which is tied to the rates they charge on loans. The higher the rate, the higher the revenue. And because revenue from higher rates doesn't require new employees or branches, the majority of it falls to the bottom line.

Most banks give investors a clear forecast of how much more they'll make as rates rise. JPMorgan Chase (NYSE:JPM) says that a 100 basis point, or 1 percentage point, increase in short- and long-term rates wiould translate into $2.8 billion in added net interest income for it over the next 12 months. Under the same scenario, Citigroup would earn an added $2 billion in net interest income.

But no bank will benefit more than Bank of America. Because of the way its balance sheet is positioned (which I explain here), the North Carolina-based bank is far more asset sensitive than its peers. This means that higher rates will have a more potent impact on its top line. According to its latest estimate -- to be found on page 90 of its third-quarter 10-Q -- it would earn $5.3 billion more in the 12 months following a 100-basis-point simultaneous increase in short- and long-term rates.

What does this mean for Q4?

It remains to be seen exactly what this will mean for Bank of America's net interest income in the fourth quarter. On the one hand, the Fed raised short-term rates by only 25 basis points, or a quarter of a percent. This is obviously less than the 100 basis points contemplated in Bank of America's interest rate sensitivity analysis.

On the other hand, long-term rates have been more volatile, increasing significantly faster than short-term rates. Since Bank of America last updated its analysis, using the interest rates as of Sept. 30, the yield on 10-year Treasury bonds -- the principal long-term interest rate benchmark -- has gone from 1.6% up to nearly 2.6%. 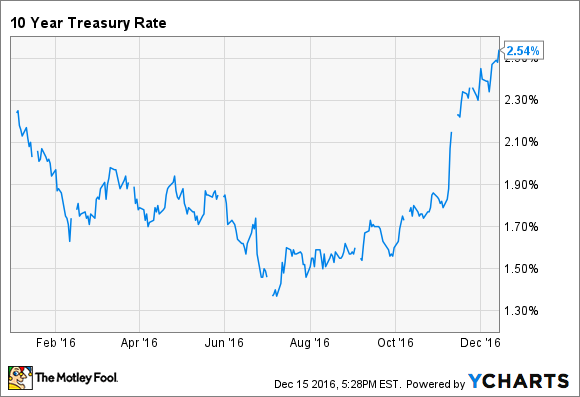 The movement in long-term rates alone should translate into $500 million or so in added revenue a quarter, according to the bank's sensitivity analysis. Combine that with a couple hundred million dollars flowing from the nudge in short-term rates, and you can see why Bank of America's fourth quarter is shaping up to be pretty good.

Trading revenues should be higher too

In addition to higher interest rates, Bank of America should also benefit from elevated revenues from its trading unit, which earns more money when market volumes surge.

Montag cited the presidential election as a catalyst, which is almost certainly also the same thing that's spurring the trend at JPMorgan Chase. Bank of America recorded its biggest trading day ever by volume on both the New York Stock Exchange and Japan's Nikkei the day after the election.

The net result is that Bank of America, JPMorgan Chase and most other banks for that matter, are positioned to see an improvement not only in so-called spread income -- from charging interest on loans -- but also in non-interest income from an increase in trading commissions.

It's this likelihood, in turn, combined with the general optimism surrounding bank stocks right now, that explains why Bank of America's stock has surged since the beginning of November.