Investing in Bank of America is similar to riding on a roller coaster. Image source: Photodisc/Thinkstock.

Many banks have struggled to earn consistent profits since the financial crisis, but none more so than Bank of America (NYSE:BAC). One of the principal reasons for this, particularly of late, is the large amount of mortgage-backed securities on its balance sheet.

No bank even comes close to Bank of America when it comes to earnings volatility. Its quarterly profits have fluctuated over the past decade by a median of 92% on a year-over-year basis. That compares to 33% at the typical big bank.

High legal costs have played a leading role in this. In the second quarter of 2011, for instance, Bank of America reported an $8.8 billion loss thanks to a multibillion-dollar legal settlement with investors in toxic mortgages underwritten by Countrywide Financial. The previous year, it earned a $3.1 billion profit in the second quarter.

The good news is the lion's share of Bank of America's legal woes are now behind it. But even though this will help to smooth out its earnings, Bank of America must contend with another issue that has caused its top and bottom lines to swing wildly: its holdings of mortgage-backed securities, combined with the idiosyncratic way Bank of America accounts for the impact of changing interest rates on the income from these holdings.

At the end of the first quarter, mortgage-backed securities made up 15% of Bank of America's assets, noted The Wall Street Journal's Aaron Back. That compares to 8% at Wells Fargo, 6% at JPMorgan Chase, and 4% at Citigroup.

This has been problematic for Bank of America because interest rates have been on the decline. At this time last year, the 10-year Treasury bond yielded 2.3%. Today, it yields only 1.5%. 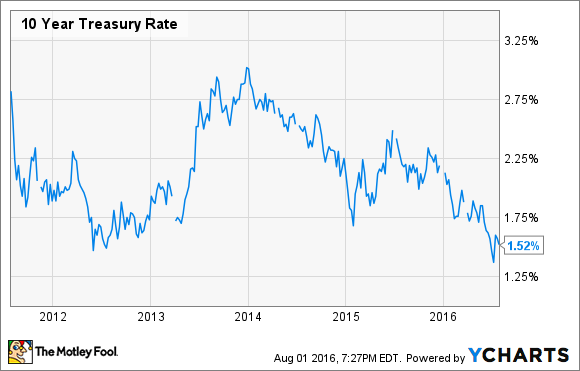 Making matters worse, Bank of America elected decades ago to account for the impact of changing interest rates on the income from its mortgage-backed securities in a way that concentrates the damage from falling rates into a single quarter. It's the only bank in its immediate peer group to use the accounting convention; the others make small adjustments along the way. This is why Bank of America's GAAP earnings fell 17% last quarter. Absent the idiosyncratic accounting, they would have been up 5%.

The flipside is that Bank of America will benefit more than other banks if/when interest rates finally do rise in earnest. This is what its executives mean when they say the bank is "asset sensitive." On its latest conference call, chairman and CEO Brian Moynihan explained that a 100-basis-point, or 1%, increase in short- and long-term rates would equate to $7.5 billion in additional net interest income.

This would go a long way toward solving Bank of America's profitability problems. Though, as has been the case for most of the past decade, the improvement would come at the expense of consistency and predictability.