Under Armour (NYSE:UA) (NYSE:UAA) in late October demonstrated why it is still valued as a growth stock despite its $40 billion market capitalization. Sales expanded over the summer months at a 22% pace, keeping the sports apparel giant on track for about $5 billion of 2016 revenue -- up 24% over the prior year's haul. The most recent quarter was Under Armour's 26th straight period of 20% or better sales growth.

CEO Kevin Plank and his executive team managed several strategic wins that they can credit with helping grow the company into a global brand this year. Its best performance came in the footwear category, though, which has soared from a tiny offering into a critical part of the business today.

A marathon and a sprint

Under Armour has been selling footwear since 2006, but the product line only recently took off. Four years ago, the division was worth $240 million, or 13% of sales. This year it's on pace to hit nearly $1 billion of annual revenue and account for over 20% of the business.

The most recent performance has been phenomenal. Through the first nine months of 2016, footwear expanded at a 55% pace. In fact, the $275 million of additional revenue brought in by the category amounts to just under 40% of Under Armour's entire sales growth in 2016. The rest of the gains are split between its other two operating divisions, apparel and interconnected fitness. Footwear demand is a big reason why the company is outpacing Nike (NYSE:NKE) right now, which has seen its expansion pace slow to 10% from 12% in the year that ended last August.

The sponsorship of NBA star Stephen Curry has been a key driver behind Under Armour's latest footwear gains, but it's far from its only hit franchise in the portfolio. A marketing campaign around athlete Bryce Harper helped boost its baseball and running products, for example. Meanwhile, Cam Newton star power ties in well with Under Armour's NFL partnership. In addition to the hit Curry products, Under Armour's Gemini and Bandit launches met with strong demand. It also boasts the top-selling football cleat on the market.

Nike and Under Armour both see footwear as a key to strong sales growth in the core United States market, and they're both willing to trade short-term profits for a chance at sustainable share gains. At its last quarterly check-in, Nike posted a 2-percentage-point drop in gross profit margin as it plowed investments into marketing and price cuts. Under Armour's profitability fell, too, in what management described as a quickly shifting competitive environment in the U.S. 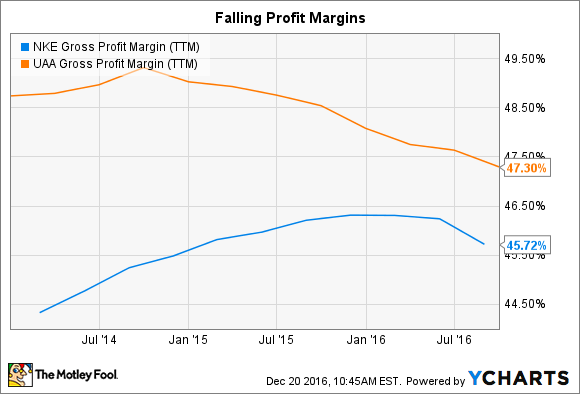 Can Under Armour keep it up?

Under Armour's stock has been under pressure since the company lowered its profit growth outlook for the next three fiscal years. The company still sees a long runway for growth, but competition will be fiercer than expected. Sluggish industry growth will likely drive prices lower for any company that's seeking to outgrow the market.

Its footwear strategy involves pouring resources into innovation and design while scaling out its biggest franchises into complementary offerings -- all while supporting the brands with hefty marketing investments.

Executives are betting the spending will pay big dividends in the future at the expense of slow profit growth through 2018. "We firmly believe that we are at a tipping point in terms of opportunities to gain market share" in the U.S. footwear industry, Plank recently told investors. If that's true, it makes sense that Under Armour would step up its investments now with an eye toward expanding operating margins from a stronger market position in a few years.