Under Armour's (NYSE:UAA) (NYSE:UA) stock has just barely outpaced the broader market this year, rising 8% compared to a 7% uptick for the S&P 500. The business, on the other hand, is extending the distance between itself and rivals. UA in July announced a 28% revenue spike -- marking its 25th consecutive quarter of 20% or better growth.

The athletic apparel specialist achieved several operating wins so far this year, including a dramatically higher sales base, surging international revenue, and strong growth in its footwear business. Let's take a closer look at what each success means to the business.

Start with overall sales, which is one of the few areas where Under Armour's smaller size provides an advantage. Revenue is up 29% through the first six months of the year, trouncing industry leader Nike (NYSE:NKE) who is growing at a 6% pace – but from a much larger base. 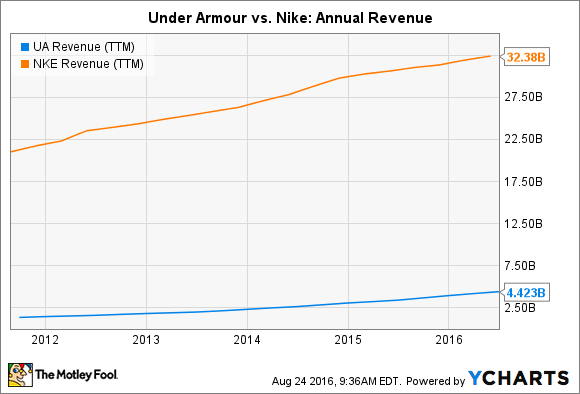 Under Armour CEO Kevin Plank and executive team project sales will rise 24% this year. That marks a slowdown from last year's 29% spike (and slightly less than the 26% bounce they first projected), yet would still put the business at $5 billion in annual revenue just 20 years into its existence.

Expanding overseas and into footwear

Meanwhile the company is morphing into a worldwide brand. International revenue rose 70% last quarter as UA established a presence in new markets including the United Kingdom, Germany, and the Netherlands. Sales from geographies outside of the U.S. now comprise 15% of the business, up from 12% last year and 9% in 2014. That's still far from Nike's 53% -- but it's a solid start. "The global expansion that we've been able to enjoy [is] something we're really excited about," Plank told investors in July. "We expect to be a global brand."

Under Armour's biggest success this year, though, is its surging footwear business. That division is up 61% over the past six months to over $500 million -- or roughly a quarter of the sales base. Two years ago the unit pulled in just $430 million over the entire fiscal year and comprised 14% of the overall business.

There's a significant drawback to this diversification. Shoes carry higher production costs than apparel, and so they aren't as profitable to sell. In fact, Under Armour's gross profit margin is running a full percentage point lower so far this year. That negative trend could continue, especially as footwear grows to take up a greater share of the business -- something closer to Nike's 66% mark. 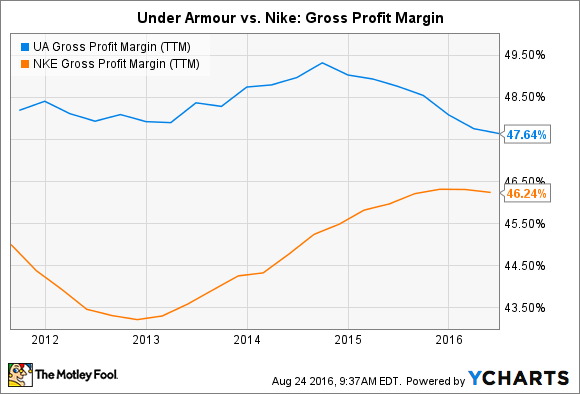 Can Under Armour keep winning?

UA should extend its footwear momentum with new product introductions in the Stephen Curry line this fall. As for the international business, executives believe China, where its branding is unusually positive, will be a major opportunity for retail sales expansion in the quarters and years ahead. The company earned more revenue in that market last quarter than it did through all of fiscal 2014.

And then there's the key U.S. apparel market, which  executives have targeted for solid long-term growth. "What you'll be seeing over the next 12 months to 18 months in terms of expanding consumer access," Plank said in a recent conference call, "is part of a measured effort to widen the playing field, with each element having been in the works for at least 18 months and in some cases even much longer."

In one example of this strategy at work, UA will bring its products to Kohl's (NYSE: KSS) department stores beginning in 2017 as part of its initiative to reach more women with the brand. Retailing partnerships like these are likely to mean that the company's core apparel categories will continue to account for much of the company's growth as it seeks to push its 20% (or greater) expansion-pace streak beyond its seventh year.