The past two years have been quite an adventure for Energy Transfer Equity (NYSE:ET) investors. The company had been riding high until it made a move in the middle of 2015 to acquire rival Williams Companies (NYSE:WMB) in an ill-fated attempt to create North America's largest energy infrastructure franchise. That move caused the market to grow extremely concerned about the combined company's financial position amid a weakening oil market, which sent Energy Transfer's unit price on a steep slide: 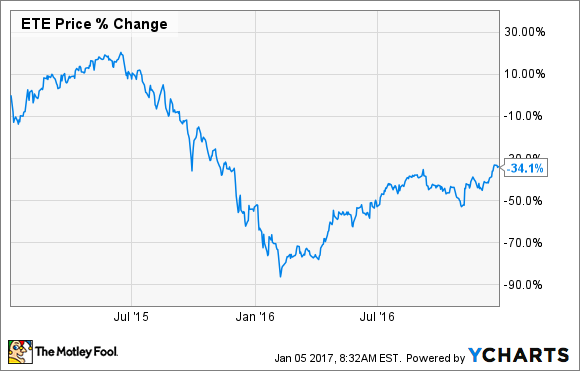 Units were still trying to find their bottom in early 2016. However, once they bottomed out, the company started a long road to recovery: 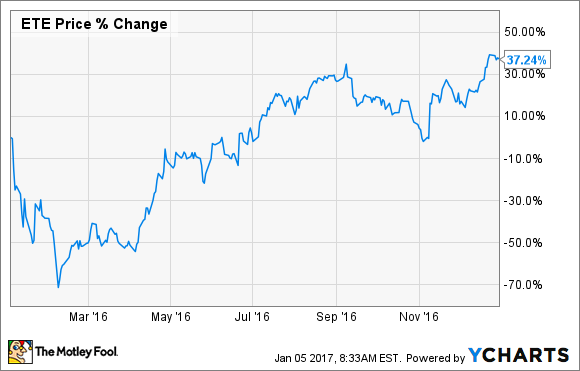 Here's a look at the catalysts that fueled that rebound and why it should continue in 2017.

Moving on from a dead deal

Energy Transfer's 2016 turnaround initially ignited after crude started finding its footing in mid-February. However, the primary catalyst of last year's rebound was the slow unwinding of the deal to acquire Williams Companies. Energy Transfer had explored several options to rework the cash-and-stock deal to ease the pressure on its balance sheet from the cash portion of the transaction, which would have required the company to borrow an incremental $6 billion. However, in the end, the stock side of the deal turned out to be its undoing as Energy Transfer's lawyers were not able to deliver the required opinion on the deal's tax treatment. Because of that, a judge ruled that Energy Transfer could terminate the transaction, which is just what it did. In canceling the deal, Energy Transfer removed a weight that at one point had pushed its unit price down more than 80% from where it was before the acquisition announcement.

Putting the namesake back on solid ground

While the drama surrounding the Williams Companies merger stole most of the headlines early last year, it was far from the only issue to plague the Energy Transfer family. Another pressing problem was its namesake master limited partnership (MLP), Energy Transfer Partners (NYSE: ETP), which was experiencing a decline in earnings and cash flow due to weakening market conditions. To make matters worse, the company's important Dakota Access Pipeline project hit several roadblocks, which have stalled progress on the nearly complete project. These issues weighed on the company's financial situation, causing a dangerous rise in its leverage ratio, made worse by the decision to pay distributions that were well above distributable cash flow.

However, Energy Transfer Partners found an innovative way to address the issues by agreeing to merge with affiliated MLP Sunoco Logistics Partners (NYSE: SXL). While Sunoco is technically the acquiring entity, the combined company will retain the Energy Transfer name and senior management team, though it will pay distributions at Sunoco's lower rate. Further, Sunoco's stronger leverage ratio will drive a significant improvement in Energy Transfer's balance sheet upon closing, with additional strengthening expected over the next 18 months as the two companies complete a slew of growth projects.

The looming completion of those growth projects represents another major catalyst for the Energy Transfer franchise in 2017. Overall, Energy Transfer Partners and Sunoco Logistics Partners are expected to complete six significant growth projects by the end of this year. These include the controversial Bakken Pipeline system, the Rover Pipeline, the Trans-Pecos and Comanche Trail pipelines, the Revolution System, the second segment of the Bayou Bridge Pipeline, and the Mariner East 2 expansion. These projects represent more than $9 billion of investments for the two companies and should supply steady fee-based cash flow for years once they enter service. The incremental income from these projects should boost the combined company's distributable cash flow, which should lead to increased earnings for parent company Energy Transfer Equity in 2017.

One more problem to address in 2017

Energy Transfer Equity could deliver further improvements to its franchise in 2017 if it finds a solution to put another of its MLPs, Sunoco LP (NYSE:SUN), back on track. The motor fuel distributor and convenience store operator's leverage ratio has risen over the past year due to increased debt after completing a slew of drop-down transactions with Energy Transfer Partners, as well as from the impact of sinking earnings due to lower fuel margins. These issues pushed Sunoco's unit price down more than 30% last year. While the company recently won some relief from banks that eased certain terms on its credit facility, it might need some additional assistance from its parent company in 2017 to get its finances back on track. This help could come in the form of a distribution support agreement or a payout cut, as well as potential assistance to fund a needle-moving acquisition. Anything Energy Transfer can do to boost the long-term sustainability of Sunoco could lift the cloud of uncertainty that's weighing on both companies.

After a brutal start, Energy Transfer Equity righted the ship and turned in a strong performance in the second half of last year. However, the company still has quite a way to go before it's back to its pre-Williams-merger-announcement high. That said, several catalysts could push units above that level, including the successful merger of its affiliated MLPs, the completion of all of their major growth projects, and a transaction that strengthens Sunoco. Suffice it to say, the existence of these catalysts means that this next year could be another good one for Energy Transfer investors.