The pipeline giant has several key projects nearing completion that aren't under a cloud of controversy.

Energy Transfer Partners' (NYSE: ETP) controversial Dakota Access Pipeline gets plenty of press, and rightfully so considering the sheer size of the nearly 1,200-mile project, its importance for the Bakken shale region, and the dispute surrounding its path. Further, with a $4.8 billion price tag for the combined Bakken Crude Pipeline project, it's the largest investment in the company's pipeline, which certainly has investors concerned the longer there is a delay. However, before investors fret too much over the stalled project, they need to remember that this is just one project in a rather large backlog for the company. Here's a look at the three other major projects coming down the pipe in 2017.

Sending gas south of the border

Energy Transfer initially expected to complete construction on the Bakken System by the end of 2016, but that's no longer possible. At best, the company might be able to finish the project in the first quarter of next year, assuming it gets the necessary permits. Because of that delay, the next project to go into service for the company could be its Trans-Pecos and Comanche Trail Pipelines, which will take gas from Texas to Mexico: 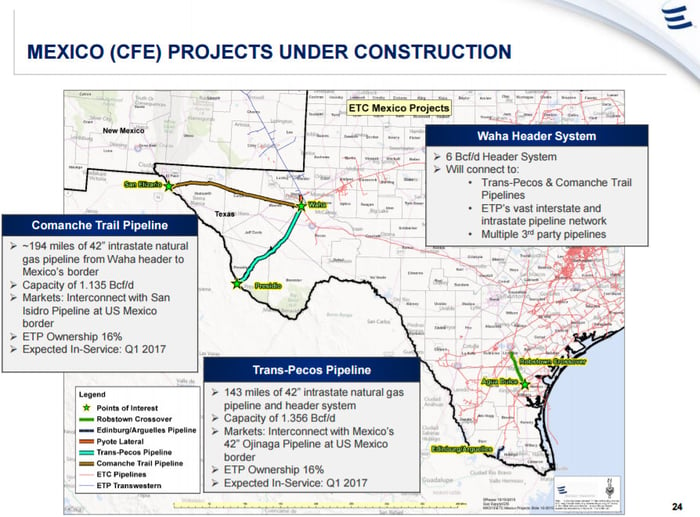 The company and its partners, Carso Energy, which Mexican billionaire Carlos Slim controls, and infrastructure builder Mastec (MTZ 0.23%), are putting the finishing touches on the $1.3 billion Mexico export pipelines and expect it to go into service during the first quarter. That said, this is a smaller project for Energy Transfer given that it only holds a 16% stake, whereas Mastec owns 33% and Carso controls 51%. Because of that, Energy Transfer only needed to pay a small portion of the project's cost, or roughly $210 million, but that also means it only gets 16% of the future cash flow. Still, it is an important project for the company because it could lead to additional growth opportunities as more American gas flows into Mexico.

Ready for Rover to come over

Next on the docket is the company's Rover Pipeline joint venture in the Utica Shale. At $3.8 billion, this project represents the second largest in the company's backlog. However, given that it has a 65% ownership interest, Energy Transfer's financial commitment of $2.5 billion is bigger than the $2.2 billion outlay for its interest in the Bakken Pipeline system. 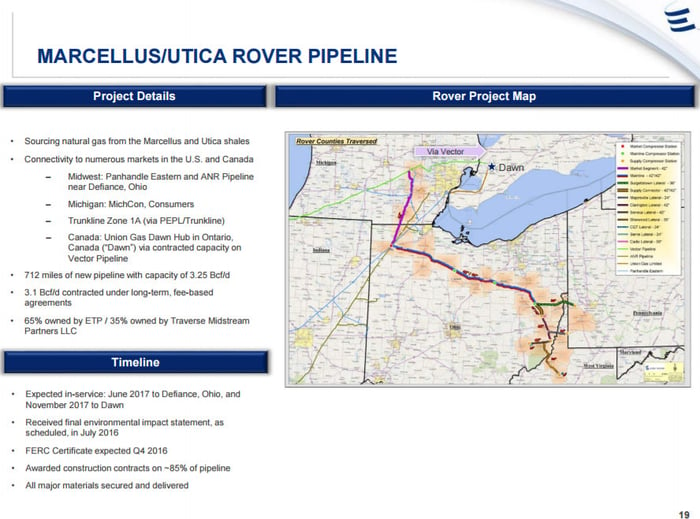 As that slide notes, Rover is a two-stage project, with the first phase scheduled to be in service by June, and the second leg in November. Because of that, the company will start collecting some of the fee-based income in the second half of the year. Given the size of the project and Energy Transfer's significant stake, this will be a meaningful contributor to results going forward.

Another important investment for Energy Transfer Partners in 2017 is the Revolution System in the Marcellus Shale. The company will invest $1.5 billion to build several pipelines and processing facilities to serve producers in the region: It's worth noting from that map that the system links up with both the upcoming Rover pipeline and Sunoco Logistic Partners' (NYSE: SXL) Mariner East Pipeline. This linkage is crucial for several reasons. First, Sunoco Logistics Partners and Energy Transfer Partners are in the process of merging, which could enable the companies to integrate these assets into one seamless system. In addition to that, Sunoco is in the midst of a $2.5 billion expansion of its Mariner East System, which is expected to be complete in the second half of 2017. These developments and integration opportunities could make the Revolution System even more valuable to customers and the combined Energy Transfer/Sunoco going forward because it will streamline logistics and save money. Finally, the merger itself bolsters Energy Transfers' pipeline because it will benefit from the expanded cash flows coming in the future from Mariner East 2 as well as future expansion opportunities from their combined assets in the region.

The next year could be an excellent one for Energy Transfer Partners. Not only should the company be able to put its 2016 stumbles in the rearview mirror, but it has a plethora of significant growth projects nearing completion. These projects, when combined with the pending Sunoco Logistics merger, position the company to deliver improving results in the coming quarters.

Matt DiLallo has no position in any stocks mentioned. The Motley Fool recommends MasTec. Try any of our Foolish newsletter services free for 30 days. We Fools may not all hold the same opinions, but we all believe that considering a diverse range of insights makes us better investors. The Motley Fool has a disclosure policy.