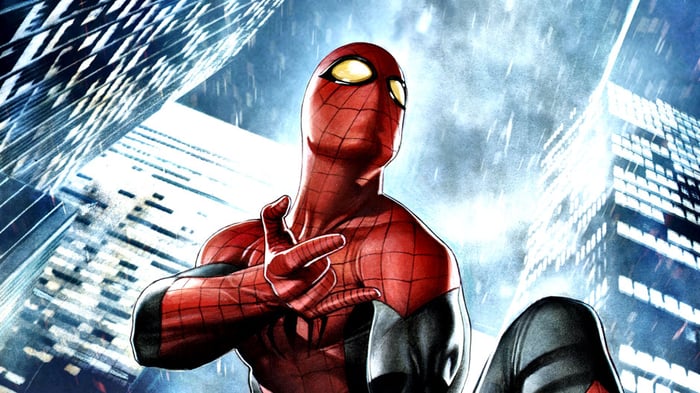 Heroic rescues are one of Spider-Man's fortes, and Sony (NYSE:SNE) is hoping that a successful reintroduction of the character can save its film wing from fading relevance. The company's movie business has been sputtering over the last few years, and Marvel's famed webslinger might be the only character capable of righting the ship.

Sony recorded the lowest domestic gross of the six major film studios in 2016, accounting for just 8% of ticket sales, and its stable of bankable properties pales in comparison with competitors Disney (NYSE:DIS), Time Warner, and Comcast. How likely is it that Spider-Man: Homecoming, due in July, lands as a hit, and would a successful relaunch be enough to reenergize the company's movie business?

Spider-Man has his work cut out for him

Homecoming will introduce Sony's second reboot of the Spider-Man property within the past decade and is far and away the most important picture in the company's upcoming film slate. After disappointing results for 2014's Amazing Spider-Man 2, Sony and Disney struck a co-production deal to integrate the character into the Marvel Cinematic Universe. The move will have a significant impact on Sony's film division and broader turnaround effort.

2016 saw the company's movie business record a triumvirate of high-profile disappointments. Ghostbusters had a $144 million production budget and a big marketing push but managed less than $230 million in global ticket sales -- particularly disappointing, as Sony had formed a production unit within its film wing to develop an expanded universe around the franchise. Its $110 million end-of-year release Passengers flopped, garnering soggy reviews and just $180 million in global gross so far. Dan Brown adaptation Inferno also underperformed at the box office, with its roughly $220 million in ticket sales coming up well short of its franchise predecessors The Da Vinci Code ($758 million) and Angels and Demons ($486 million).

The company is still in the process of orchestrating a turnaround effort that places increasing importance on its sensors, video games, and film businesses. Its film business accounted for roughly 13% of operating income in the last fiscal year, but was down roughly 34%.

Sony has a big growth opportunity at the movies if it can bolster the quality and marketability of its output. In 2016, Sony's films managed to score roughly $912 million in global ticket sales. The company doesn't have the franchise assets to match Disney's record $3 billion domestic and roughly $7.5 billion global box office performances, but it should theoretically be able to get a lot more out of its film wing than it's managed in recent years.

Spinning a web of success

A strong run for Spider-Man: Homecoming should translate to favorable year-over-year sales comparisons and open up audience receptivity for the expanded universe built around the license which the company has been trying to get off the ground. A film built around the franchise's Venom character is likely in the works, and the company was previously developing a female-led picture set in the world of the franchise that might be retooled for the new continuity.

Spider-Man is one of the most marketable characters in entertainment, and generates more revenue than any other superhero despite no longer reigning as the biggest box office draw. Sony actually sold the merchandise rights to move tie-in products to Disney in 2011, which sends one of the most potentially profitable income streams tied to the reboot elsewhere, but the shared interest in successful films built around the character likely played a role in bringing the two companies together for Homecoming.

With the new version of Spider-Man having been introduced to good effect in 2016's Captain America: Civil War and Robert Downey Jr. set to feature as Tony Stark in the webslinger's big screen return on July 7, the picture has the synergistic effects of the Marvel Cinematic Universe working in its favor and is likely to see strong benefits from the tie-in. Spider-Man has also been confirmed to feature in Disney's upcoming Avengers: Infinity War movies, and a sequel to Homecoming is already slated for July 2019.

Spider-Man Homecoming will probably be a hit

While the release of Spider-Man: Homecoming is roughly six months out, and the picture's performance will hinge in part on the extent to which the movie turns out to be a quality product, the reboot appears to be in good position to be a winner for Sony. Underperformance from the company's movie division probably has roots in personnel and studio vision, and as such, sustained improvements will come down to more than a breakthrough reintroduction of its most valuable property, but the upcoming Spider-picture is probably the project best-positioned to push the division in a better direction.

If Sony can build an expanded universe from the Spider-Man license, it could provide a substantial boost to its movie business through the next decade, and having a thriving, blockbuster series under its wing could help to make key talent more interested in working with the studio. Cue that famous line about great power and great responsibility.