Guess?, Inc. (NYSE:GES) shares dropped 36% throughout 2016, according to data provided by S&P Global Market Intelligence, following the fashionable clothing company's less-than-fashionable earnings throughout the year that showed how companies like this are struggling amid a changing consumer landscape.

Guess? seems to be struggling to hold its place amid a changing market, similar to many other trendy fashion stocks that at once were considered must-haves but have since fallen victim to fickle consumer fashion tastes. Pricing pressure from lower demand and increased competition has pushed Guess?'s gross profit margin down considerably over the past five quarters. 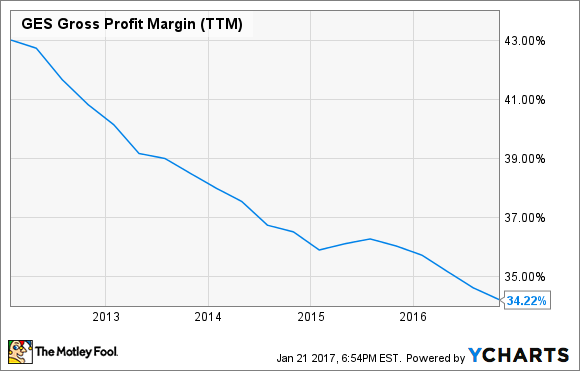 Consumer confidence hit a 12-year high in December, which could help to increase spending on discretionary goods, such as higher-priced clothing. Additionally, Guess? has had a few bright spots in recent earnings, such as unexpectedly strong sales growth in Europe and some success with its push to increase e-commerce sales. Going forward, the company plans to turn its dismal earnings performance in 2016 around by negotiating rent reductions, closing unprofitable stores, enhancing supply chain value through vendor consolidation and other cost savings, and continually enhancing digital capabilities.

Those initiatives look positive but will be hard to make successful in an increasingly competitive market. Until there is more proof that the company's turnaround strategy is working, there looks to be better clothing stocks for investors interested in playing this market.

Take a Guess at Why Guess?, Inc. Stock Took a Dive in 2016 @themotleyfool #stocks $GES Next Article
Current