Please ensure Javascript is enabled for purposes of website accessibility
Log In Help Join The Motley Fool
Free Article Join Over 1 Million Premium Members And Get More In-Depth Stock Guidance and Research
By Harsh Chauhan - Mar 3, 2017 at 8:00AM

Attacks on Intel across different segments could help the company extend its market share gains in 2017.

Advanced Micro Devices (AMD 0.59%) is giving both NVIDIA and Intel (INTC 1.45%) a run for their money, as the latest market share numbers for graphics processing units (GPUs) and central processing units (CPUs) indicate. Jon Peddie Research shows that AMD's overall GPU market share -- including both discrete and embedded graphics -- increased to 14.4% in the fourth quarter of 2016. That is a gain of 2.6 percentage points from the prior-year period, outpacing both its peers.

Intel, meanwhile, saw its share decline 3.6 percentage points to 68.1% as consumers appear to gravitate towards powerful discrete GPUs over integrated units. The bad news for the market leader: Intel is not losing market share only in graphics processors. 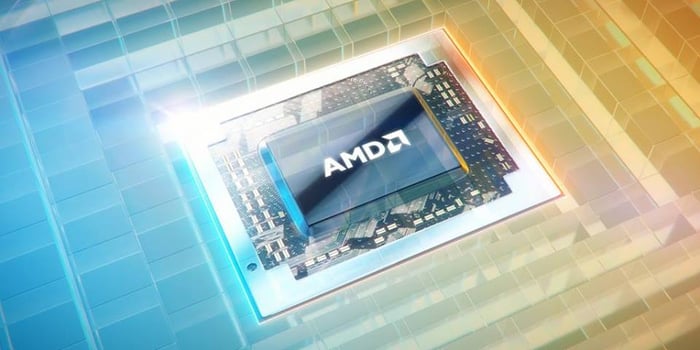 Mercury Research points out that AMD also gained on Intel in the CPU market. Its x86 processor market share increased to 13.6% from 12.7% in 2015. On the other hand, Intel saw its market share fall accordingly to 86.3%.

In 2017, both Intel and AMD will duke it out with new CPU products -- will the underdog be able to gain on Intel once again?

AMD has devised a broad strategy of tapping both the high-end and budget markets for growth. While its latest and greatest Ryzen architecture has been designed to compete in the high end segment, AMD has decided to consolidate its lower-priced offerings to meet demand from users on a budget, according to Mercury Research.

As it turns out, most PC growth until 2020 will take place in emerging markets. IDC predicts that they will account for 54.3% of PC market share in 2020, compared to 51.2% last year. Currently, the GDP per capita in most emerging markets is under $10,000, including the BRIC nations (Brazil, Russia, India, China), so having budget offerings is a smart move for AMD.

According to Forbes contributor Antony Leather, AMD's baseline 4-core CPU -- the Ryzen 3 1100 -- will cost $129. By comparison, Intel's entry-level Core i3-7100 Kaby Lake processor, launched this year, is selling for just under $120 at many online retailers though its specs are not quite as strong with two fewer cores.

Competing at essentially the same price point, AMD is hoping to win over budget-minded consumers, giving it a leg up in this segment of the market.

What about the high end?

In response, Intel is rumored to be launching its Kaby Lake-X Core i7-7740K processor in August this year. However, it will be late to the market with something that truly competes against the flagship Ryzen, which AMD is launching this month, giving it about six months to rack up sales before Intel can respond.

Additionally, rumors on Taiwanese site BenchLife indicate that to tap the premium market, Intel might come out with a 10-core high-end processor that could sell for as much as $1,700. Details are sparse, but such a price point generally indicates that Intel would eclipse AMD's own top-of-the-line processor (expected to retail for $499).

The gaming hardware market is expected to grow 6% annually through 2019, and the majority of that growth will take place in the high-end segment where AMD will be able to enjoy a running start.

With these impressive releases offered at competitive prices, it won't be surprising if AMD manages to steal additional market share from Intel in 2017.