The pharmaceutical industry can present a growth investor with a dilemma: Should I settle for the slow growth of the big drug companies to get safety, or should I accept the risks of smaller biotechs to get the growth? Celgene (NASDAQ:CELG) offers something in between with the best of both worlds.

Strong growth from the current portfolio

Celgene's revenue of $11.7 billion in the last 12 months is plenty hefty, and the company turns about $0.31 of every revenue dollar into free cash flow. That alone makes the stock less risky than many small biotechs, but what investors should really love is the growth the company's drug portfolio generates -- a 22% increase in sales in 2016. 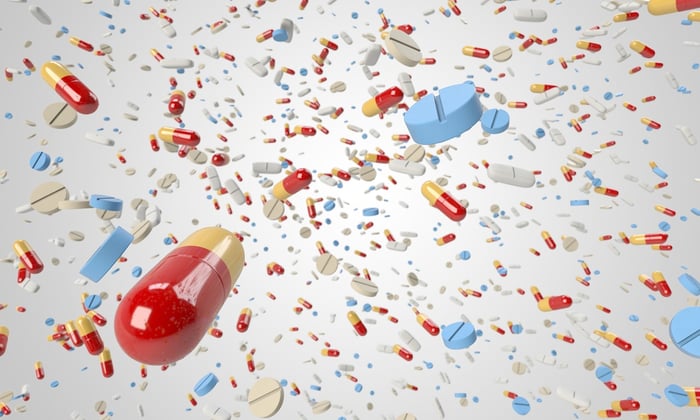 The drugs in Celgene's portfolio are still early in their patented life and promise to keep the growth coming in the next few years. The company's biggest drug, Revlimid, accounts for 64% of total sales. Such a reliance on a single drug could be cause for investor concern, but in this case, it's feeding the growth of the business. Celgene is pursuing new indications for the blood cancer treatment, having recently been granted FDA approval for its use as a maintenance therapy for multiple myeloma after stem cell transplants. Also fueling growth is the fact that treatment durations with Revlimid are lengthening. Management expects sales in 2017 to be over $8 billion, a 17% increase over 2016, and analysts expect Revlimid to be the No. 2 oncology drug worldwide by 2022, with annual sales of $13 billion.

Revlimid is not the only source of growth in the portfolio. Two other drugs exceeded $1 billion in sales for the first time in 2016, and both are expected to hit $1.6 billion this year.

One issue most big drug companies have but Celgene doesn't is a threat from generic drugs. None of its four biggest drugs, representing 92% of 2016 sales, have patents expiring until 2023.

There's enough potential in Celgene's approved drugs to keep growth healthy for the next few years, but the development pipeline is loaded, too. The company has 30 unique molecules in development. Of those, 14 could make it to the market in the next five years, and management thinks 10 of those could peak at over $1 billion in annual sales.

The pipeline drug management is most excited about is ozanimod. One indication for it is multiple sclerosis, where it has an improved safety profile over Novartis' Gilenya, with annual sales of over $3 billion. However, the company thinks the biggest opportunity for it will be in ulcerative colitis, and it expects peak annual sales of $4 billion to $6 billion. Ozanimod could launch in 2018.

Besides fueling growth five to 10 years into the future, Celgene's pipeline will also supply a stream of news from human trials that could propel the stock in the short term. It's likely not all results will be positive, but there are 19 phase 3 trials reading out through 2018, so there's plenty of potential for near-term catalysts.

The wherewithal to grow the pipeline

The pipeline as we see it today doesn't tell the whole story of the company's potential. Celgene's financial strength will allow it to build its pipeline through research, acquisitions, and partnerships. The company filed eight investigational new drug (IND) applications in 2016, and 13 new programs are expected to advance to proof of concept through 2018.

Celgene management expects to generate a staggering $100 billion in free cash flow in the next eight years. Based on history, investors can expect a good portion of that to be invested in acquiring new assets for the pipeline, extending growth potential long into the future. The company's COO was confident enough that she recently said she thought the company would grow every year through 2030.

Celgene offers investors the possibility of appealing growth over a long time horizon with bets spread out over many molecules and trials. Company officials predict revenue of over $21 billion in 2020, which would amount to a 17% compound annual growth rate from 2016. But healthy growth should be sustainable for well into the next decade. With a price-to-earnings ratio of only 17 times guidance for 2017 EPS -- less than the forward P/E of the S&P 500 -- the stock is a bargain. Financial strength like big pharma and growth like a biotech make Celgene a rare find in pharmaceuticals and a worthy consideration for growth portfolios.