bluebird bio (NASDAQ:BLUE) is up 11% at 12:34 p.m. EDT Tuesday after presenting solid early stage data for its cancer treatment, codenamed bb2121, at the American Society of Clinical Oncology meeting on Monday.

Theoretically the data should have been priced in since the press release came out before the market closed -- and shares were up 8.5% Monday -- but the company held a webcast Monday evening that seems to have bolstered interest in the data and convinced at least one analyst to upgrade the stock, which are presumably contributing to Tuesday's additional double-digit gain.

Bb2121, which is partnered with Celgene (NASDAQ:CELG), is a CAR-T treatment that takes immune cells out of a patient, trains the immune cells to attack cancerous cells that express a protein called BCMA, and are then put back into the patient where they attack the cancerous cells.

In an early stage, phase 1 trial of patients with multiple myeloma, bb2121 produced a 100% overall response rate at the three highest doses of treatment. Of the 15 patients, four of them achieved a complete response, seven of the patients were deemed to have a very good partial response -- that's an actual clinical term, not something Bluebird and Celgene made up -- and the remaining four had a partial response. The response rate is quite impressive considering that these patients had failed a median of seven prior therapies. 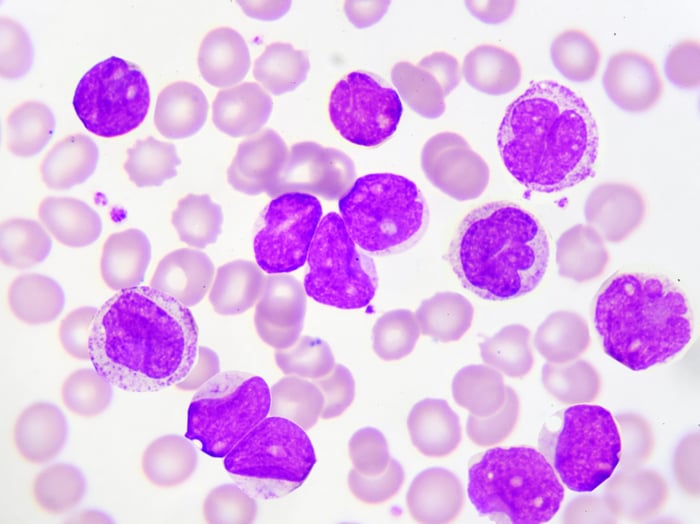 Equally important, the safety profile looks manageable. Multiple myeloma is a type of blood cancer, so the side effect profile can be worse than side effects for diseases that aren't life threatening, but some CAR-T treatments have been so active that they've caused the patient's immune system to go into overdrive, killing the patient. That issue doesn't seem to be a problem with bb2121.

Bluebird and Celgene plan to continue enrolling patients in this study to get more data on the best dose to take. Given the great response rate and the unmet need for multiple myeloma patients that have failed many previous treatments, it's likely the Food and Drug Administration would guide Bluebird and Celgene to jump straight to a clinical trial that would allow bb2121 to gain regulatory approval.