Please ensure Javascript is enabled for purposes of website accessibility
Log In Help Join The Motley Fool
Free Article Join Nearly 1 Million Premium Members And Get More In-Depth Stock Guidance and Research
By Daniel B. Kline – Updated Jun 12, 2017 at 6:36AM

All four major wireless carriers now offer plans with no limits, but the deals are very different.

After resisting it for a long time, AT&T (T 1.05%) and Verizon (VZ 1.01%) now offer unlimited data plans. They join T-Mobile (TMUS 0.17%), which only offers plans with unlimited data, and Sprint (S), which has been aggressive in pushing unlimited plans.

Every company, of course, says it has the best plans. Verizon and AT&T push the quality of their networks, while Sprint pokes holes in that argument pointing out that the differences between all four networks have shrunk. Sprint is correct about that -- though it still has the worst network of the four companies. That, however, hasn't stopped Sprint from running cheeky ads using former Verizon spokesperson Paul "Can you hear me now?" Marcarelli in ads that shoot down Verizon's claims of superiority.

In most cases, network no longer matters. That doesn't mean that in some markets there won't be differences, or that your family's location or travel situation won't be affected by service anomalies. For most people, though, which carrier has the best network is no longer a key determining factor when it comes to picking a wireless carrier.

That means the main reason to choose a wireless carrier, for most people, is price. There's a clear winner when it comes to what a family of three of four will pay for unlimited data plans. 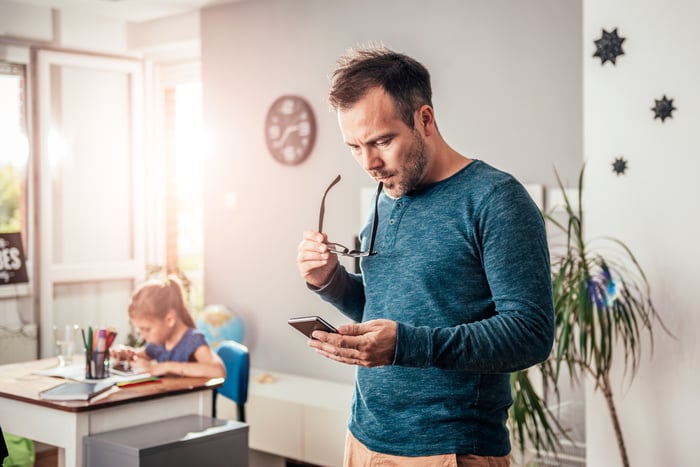 Picking a family unlimited plan can be a challenge. Image source: Getty Images.

Like AT&T, Verizon wasn't eager to offer unlimited data plans, because of the billions it has made over the years in overages or with people buying more plan than they need. That has changed, and Verizon now offers three unlimited data lines for $160 or four for $180 for customers paying via auto-pay. Those prices are before taxes and fees, which vary based on where you live.

AT&T offers three lines of unlimited for $135 or four for $155. That deal, like Verizon's, doesn't include taxes or fees, and it requires auto-pay. In addition, while it's not relevant to the discussion of which carrier is cheapest, AT&T also offers what it calls "Unlimited Plus," a plan that includes HBO and a $25 discount on DIRECTV. Those plans cost $165 for three lines and $185 for four.

Can you hear Sprint now?

Sprint has been the most aggressive company of the four major carriers when it comes to offering promotional deals. The company currently offers a plan in which customers buy two unlimited lines for $90 and then get up to three more lines for free. That's the best deal from any of the four carriers by a lot, but it's a limited-time deal that expires on June 30, 2018. After the promotional period ends, pricing reverts to its standard offer of $130 for three lines and $160 for four, and, of course, taxes and fees are extra.

What does the Un-carrier offer?

T-Mobile, unlike its three rivals, doesn't add taxes or fees to its advertised prices. That means if a plan costs $50, that's actually what you pay. Under the carrier's current deal, it's offering three unlimited data lines for $130 or four for $140, if the customer pays with auto-pay.

Which carrier has the best deal?

It's important to note that all of these unlimited plans come with caveats, with which the carrier can slow down data if users exceed certain thresholds. All four companies do it, and it affects only a small number of customers.

Sprint has by far the best deal, given its promotion of up to five lines for $90. That blows away second-place T-Mobile's deal. When that Sprint promotion ends -- which it could at any time -- T-Mobile and Sprint then have the same price ($130) for three unlimited lines, with T-Mobile being cheaper for four lines by $20, at $140. And if you factor in T-Mobile's pricing with no taxes or fees, it has the best non-promotional unlimited deal for families,.

So if you're willing to go through the hassle of perhaps having to switch carriers next June, Sprint will save a family of four $50 a month with its current promotion. Even with taxes and fees on top of its $90 offer, that's still the best deal being offered.