Imagine if Ronald McDonald suddenly showed up in an ad for Burger King or if Michael Jordan started pitching Converse.

That's essentially the level of bombshell Sprint (NYSE:S) has dropped with its new commercial, which stars Paul Marcarelli, the man who for years touted Verizon (NYSE:VZ) while delivering the line "Can you hear me now?" While it's clearly a gimmick to hire the former pitchman for your rival, Sprint actually has some solid logic for doing it. It's an attempt to acknowledge that while Verizon has a better network, it's not enough of an improvement over Sprint's to justify the higher cost. 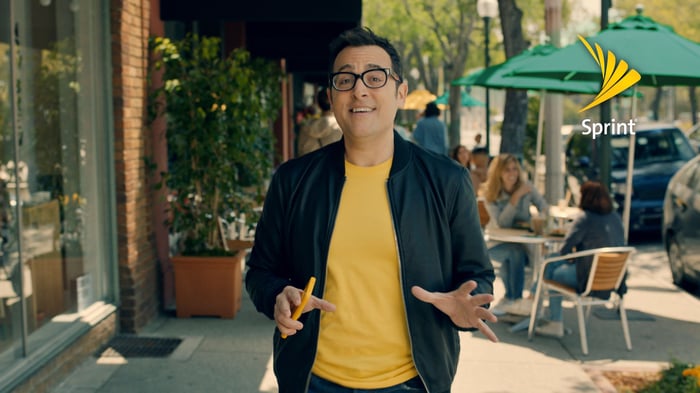 What is Sprint saying?

The No. 4 wireless carrier is not using Marcarelli to say that it has the best network. Instead, it's highlighting the improvements it has made while citing data from Nielsen which says that in the  top 106 metropolitan markets in the United States Sprint's reliability beat T-Mobile's (NASDAQ:TMUS) and performs within 1% of AT&T (NYSE:T) and Verizon. The ads also cite Sprint's offer to cut customers' bills in half, using the logic that a 1% better network is not enough to justify paying more. Sprint says Nielsen's reliability tests "measure both accessibility and retainability of voice calls and data sessions."

"I've watched with interest as each of the wireless carriers claims to be the most reliable or the fastest," Marcarelli is quoted as saying in a Sprint press release. "But what I've found is...the 'better' that some other national carriers claim about reliability is really less than a 1% difference. Does anyone even really notice a difference of less than 1%? But when it comes to saving money.... Sprint is by far the best choice for consumers.."

This is a smart play by Sprint

Hiring Marcarelli, whose name may be unknown, but whose face is not, gives Sprint a very visible way to get its message across. It's a publicity stunt, but a smart one for a carrier that has fallen behind AT&T and Verizon in network quality while lagging behind T-Mobile when it comes to publicity.

These ads, which debuted during game 2 of the National Basketball Association Finals, might be a catalyst for the company to get its message across. That message is essentially to answer Verizon's "better matters" slogan with "actually, all you need is good enough for less money." It's not the typical wireless carrier boast, but it may resonate.

"Verizon customers can switch to Sprint, experience network reliability on par with Verizon and save money on their wireless service each month," Sprint CEO Marcelo Claure is quoted as saying in the company press release. "Using Paul in our advertising demonstrates loud and clear that it's a new day in wireless."

Marcarelli actually delivers the line "it's 2016 and every network is great," tagging his pitch with "can you hear that?" It's a bold play followed by a mic-drop line that could be enough to get Verizon and AT&T customers to at least sample whether good enough for less money offers more value than better or even the best.