If you are getting frustrated with the lack of stocks on sale, you aren't the only one. The valuations across the broader market are way too high for any value-oriented investor to get excited about making a purchase today. That said, there are still a small collection of stocks that look to be selling at a decent discount if you are willing to be patient.

Three stocks that fall into this category are Kroger Co. (NYSE:KR), Terra Nitrogen Company (NYSE: TNH), and Wabash National Corporation (NYSE:WNC). Here's why anyone looking to buy stocks on sale should consider these stocks today. 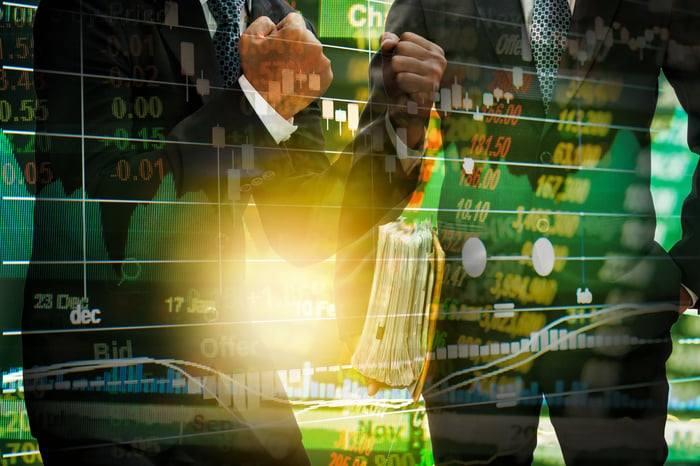 The past several days have been a whirlwind for shares of Kroger. First, there was the downward revision to 2017 guidance that sent shares plummeting 17%, and then there was the further sell-off when Amazon announced it was buying Whole Foods. Even before this announcement, shares of Kroger weren't that outrageously priced -- enterprise value to EBITDA ratio was 7.6 times. After those sell-offs, though, its current EV/EBITDA of 6.3 looks awfully tempting.

For investors with a long-term focus, that 2017 guidance revision isn't a great sign, but it certainly isn't an investment thesis killer. The overall grocery market has been in the midst of a period of price competition as others have engaged in some heavy promotions to get shoppers in the door. As its management team put it, competing on price at the expense of earnings is worth it because it is "less expensive than regaining customer loyalty." Eventually, this pricing war will subside, and chances are Kroger will come out stronger than its current competition.

The longer-term threat, of course, originates from this recent Amazon deal with Whole Foods. Perhaps the largest fear is the unknown with this one, but it isn't out of the realm of possibility that Amazon uses Whole Foods' store footprint as a launching pad for fast grocery delivery services. That may be the case, but keep this in mind when thinking of disruption potential here: There are currently 16 states in the U.S. where Kroger and Whole Foods have no overlapping interest, and Whole Foods' operations are heavily concentrated in urban areas. So even if Amazon disruption is coming to the grocery business, it will take quite some time until we see significant head-to-head competition.

Based on this, it seems that Wall Street is overreacting to short-term news and the amount of time it will take for Amazon to disrupt the grocery business. That makes Kroger's stock look awfully tempting today.

The nitrogen fertilizer market is in the middle of a weird situation. About a decade ago, the obsession with China's economic growth meant that many companies invested in new fertilizer production capacity. That demand growth didn't materialize, though, as China tapped the brakes on its growth and the rest of the world hasn't been able to offset the decelerating growth rate.

At the same time, domestic shale gas in the U.S. has transformed from one of the most expensive forms of production into one of the least expensive. This disruption has upended the entire fertilizer market. There is too much capacity, and several of the most expensive sources are recently constructed facilities where producers aren't ready to cut ties with those investments. As a result, nitrogen fertilizer prices are at the lowest in 13 years.

This has devastated Terra Nitrogen's stock -- down 57% over the past five years. I can't argue against those who would want nothing to do with this stock anymore after enduring that kind of performance. That said, there is a long-term opportunity with Terra Nitrogen.

As is the case with every commodity market, nitrogen fertilizer supply and demand will eventually come back into equilibrium. In fact, Terra Nitrogen's parent company CF Industries estimates that 8.7 million tons of production capacity -- mostly in China -- will shut down between now and 2021, and that is on top of the 25 million tons of capacity that was shut down from 2014 to 2016. Eventually, these shutdowns and growing fertilizer demand will bring the market back in balance and increase prices.

Of the fertilizer producers out there, Terra Nitrogen is better positioned to benefit from this trend than almost anyone else. Last quarter during this tough market, Terra Nitrogen still recorded a 35% operating income margin. It also helps that Terra Nitrogen is a variable rate master limited partnership, so all available cash gets distributed to investors every quarter. Those payments are considerably less than they were before, but they help ease the sting of lower stock prices and leave lots of room to grow.

Still cheap, even at this point in the industry cycle

Typically a company's stock can't rise more than 50% in a year and still be considered an on sale stock. Based on the changes management has implemented at Wabash and the stock's current valuation, though, it looks like this stock is still in sale territory.

One thing that makes Wabash a different company than just a few years ago is management's 2020 strategic plan. The goal of this plan is to lift revenue about $3 billion annually and produce a greater than 20% return on invested capital. One of the pillars of that strategy was to diversify away from its dry van trailers. This past quarter, dry van trailers represented 64% of all revenue, which was down from 77% back in 2005. Also, management has significantly lowered its debt levels, which has lowered interest expenses, improved bottom line results, and freed up enough cash to buy back shares and maintain its dividend payments.

Adding up all of these factors, you get a diversified manufacturer with high rates of return and a tidy balance sheet. Despite all of these attractive traits, though, shares of Wabash trade for a reasonable enterprise value to EBITDA ratio of 5.9 times. One could argue that this cyclical business has had a good few years and is headed for a decline. That isn't an unreasonable assumption. Wabash's greater product diversity should help to mitigate some of those effects, though, and its low debt levels give it some wiggle room if revenues do start to decline.

At today's price, Wabash looks like a company where Wall Street thinks of it as the company it was rather than the company it is today. This should give investors a good window to buy shares.