Please ensure Javascript is enabled for purposes of website accessibility
Log In Help Join The Motley Fool
Free Article
Join Nearly 1 Million Premium Members And Get More In-Depth Stock Guidance and Research
By Tyler Crowe – May 8, 2017 at 7:09AM

As has been the case for the past several quarters, Terra Nitrogen Company (NYSE: TNH) continues to deal with slumping nitrogen fertilizer prices. While the company was able to offset weak prices with higher production to a certain degree, it still affected the bottom line and its ability to give cash back to investors. 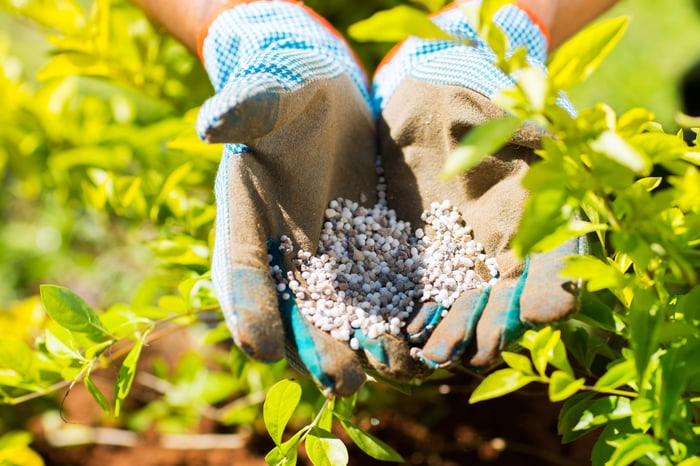 Terra Nitrogen's results were mostly mixed for the quarter. The good thing from earnings was that its total volumes of ammonia and urea ammonium nitrate (UAN) rose 40% and 47%, respectively. For the increase, Terra Nitrogen can thank its entire Verdigris fertilizer facility, which was running at a high rate compared with this time last year, when the company experienced an unplanned outage at the facility.

The bad thing was that the company started selling more nitrogen fertilizers into an already well-supplied market. The average selling prices for ammonia and UAN declined by 23% and 24%, respectively. To make things worse, the average price of natural gas -- Terra Nitrogen's primary feedstock -- was up 5%. The combination of higher volumes, lower realized prices, and higher feedstock costs all pretty much offset themselves, as gross margin for the most recent quarter and the prior year's result were both 39%.

Since CF Industries is the general partner and operator of Terra Nitrogen, it doesn't host a conference call. According to CF Industries CEO Tony Will, though, the market for nitrogen fertilizers still very much remains in a state of flux:

As we look at producers in high-cost regions, we are seeing rational behavior in response to these current industry conditions. For example, we have seen reductions in Ukrainian urea operating rates and recently announced curtailments of ammonia production there as well. Chinese producers have reduced operating rates and exports due to the low global price environment.

Reported Chinese operating rates for the first quarter remained below 60%. While there were roughly 9 million metric tons of capacity shut down permanently in China last year, an additional 7 million metric tons has also been idled. A majority of those plants have been idle for many months and are not currently running despite local Chinese spring demand. We believe this increases the probability that a substantial portion of these plants will not restart.

At the same time, the number of new capacity expansion projects being initiated around the globe has slowed dramatically. We continue to project the rate of net new capacity growth after this year and for the foreseeable future to be well below the normal annual demand growth rate of 2%. Therefore, we expect the global supply and demand balance to tighten over the next few years, leading to industry recovery.

Unlocking shale gas in the U.S. has had a profound impact on the global nitrogen fertilizer market. Cheap feedstocks have led to a surge in newly constructed facilities that have significantly lowered North America's import demand for fertilizer, and it's disrupting decades of trade flows and keeping prices incredibly low.

Terra Nitrogen has suffered its fair share from lower prices, but it remains a low-cost operator that still throws off cash to shareholders thanks to its debt-free balance sheet and variable rate distribution policy. It will probably take a while before the nitrogen fertilizer market adjusts to this new trade flow, but Terra Nitrogen has the traits to survive these tough times and will be well positioned to benefit when the market normalizes again.