Gilead Sciences (NASDAQ:GILD) has been one of the most successful biotech companies in U.S. history, riding the success of key treatments for HIV and hepatitis C to huge long-term gains. Yet recently, the drop in revenue from hep C-related sales has led to a long slump for Gilead stock, and some worry that the biotech giant won't be able to get back on track. For dividend investors, Gilead has one of the most attractive yields in the business, but should shareholders worry about the sustainability of the dividend if profits fall? A dividend cut -- or even a pause in its payout growth -- would be a huge setback for a company that just recently jumped on the dividend bandwagon with lucrative quarterly payments to its shareholders.

How Gilead's dividend came to be

Biotechnology companies aren't known for their dividends because they generally reinvest their spare cash back into their business operations. That's one reason why Gilead's 2015 announcement that it would start paying a dividend came as such a surprise, and the reaction from investors was actually more mixed than one might expect. Investors do tend to like dividends as a sign of financial security and future confidence. They also fear that when a high-growth company like Gilead starts to pay a dividend, it means that it doesn't have any better uses for the cash, and that can point to the end of the growth phase for the business and usher in a long period of less exciting performance.

Gilead has tried to reassure investors of its continuing growth prospects by growing its dividend. Last year, the company boosted its initial payout by nearly 10%. Gilead followed suit this year with another 10% dividend increase despite reporting falling earnings from year-ago levels. 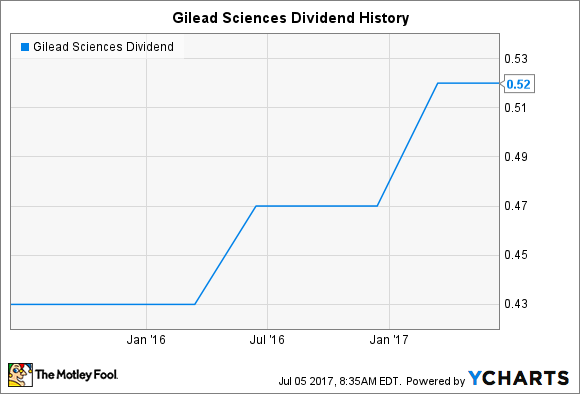 What's ahead for Gilead's dividend?

Gilead's stable of key drugs generates a lot of cash flow, and even with a healthy dividend, the biotech giant barely taps into its profit. With just a fifth of its earnings going toward its current dividend payment, Gilead would have plenty of room to keep raising its quarterly payouts if it so chose. The biotech could also keep raising dividends even if earnings continue to slump, allowing its payout ratio to climb toward levels that are more common for companies of Gilead's size.

There is one aspect of Gilead's financial situation that poses a potential challenge that the company will need to overcome. As part of its overall capital allocation strategy, Gilead has increased its debt levels in order to help fund share buybacks. The biotech still has a healthy cache of cash -- about $34 billion as of the end of the first quarter of 2017 -- but high debt-to-equity levels could restrict its financial flexibility going forward. 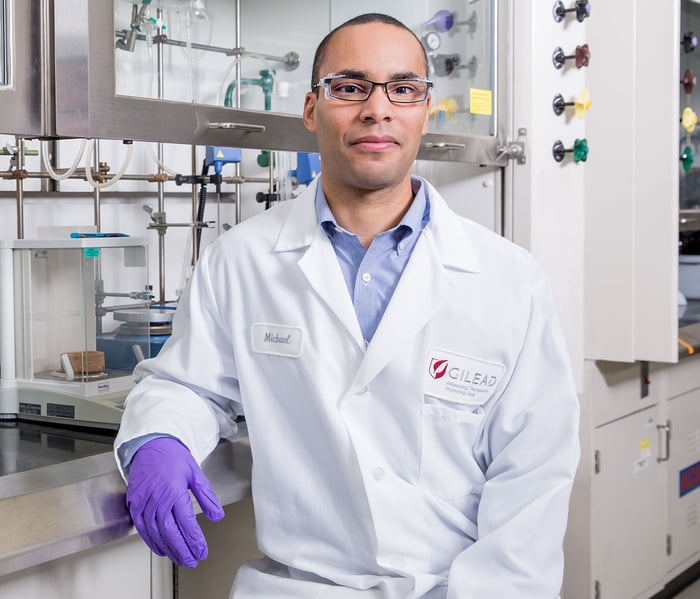 That's especially problematic because consolidation in the biotech industry has led many to believe that Gilead's best strategy for the future is to make a major acquisition. Rather than spend money on dividends and stock repurchases, Gilead could instead seek out buyout targets that would help offset the declines in sales of its hepatitis C drugs as well as beef up its pipeline for future candidate treatments. However, price tags for acquisition candidates have been high, and Gilead might have to pay a lot to make sure it gets the companies it wants without letting competitors snatch them away in a bidding war.

Keep an eye on Gilead's dividend

For now, Gilead Sciences is continuing to move forward with its general strategy toward growth, and the company has established a track record of double-digit percentage dividend increases on an annual basis. The company's boost in March gives Gilead another eight months before investors should expect any news on the dividend front, but if the company changes its pattern going forward, then it could spur speculation about whether Gilead believes its future is as bright as investors hope it is.