Everybody loves a cheap stock. The problem is, cheap stocks are hard to find, and they're often cheap for a reason. When you buy a stock for less than $5, you have to assume that it's going to come with some "issues."

But are those issues big enough to explain the price being so low, or is a stock that costs under $5 really what it looks like -- a bargain? That's what I aim to find out today as I check out three top stocks selling for under $5. 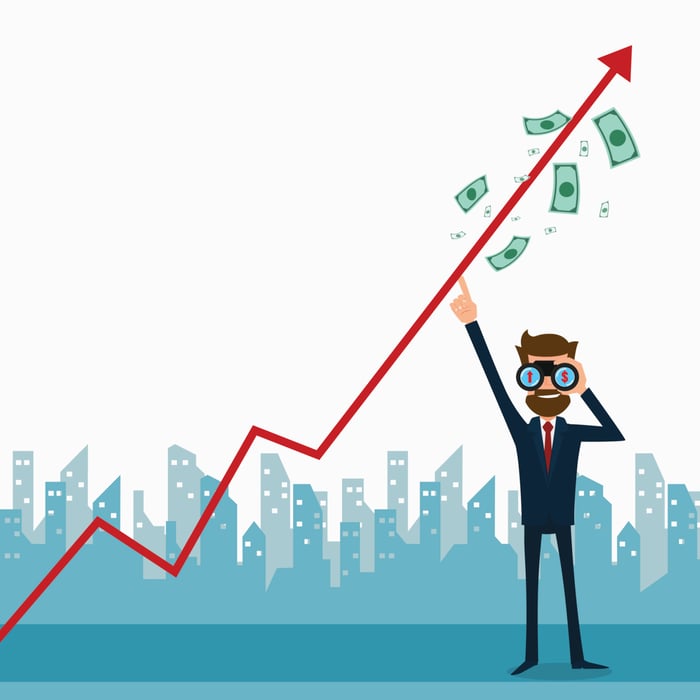 Looking for cheap stocks that could go up a lot? What a coincidence -- so am I! Image source: Getty Images.

Our survey today begins with J.C. Penney (OTC:JCPN.Q), the original "stock with issues." A department store in a world where no one shops at department stores anymore, J.C. Penney has suffered three straight quarters of sales declines. It's also lost money in five of the last six years, before finally turning profitable last year and earning profits of ... $1 million. On $12.5 billion in sales, that was a profit margin of 0.008%.

Is J.C. Penney salvageable? I honestly doubt it. That said, the company has managed to keep its revenues more or less flat for years now, and in the face of withering competition from online e-tailers like Amazon.com (NASDAQ:AMZN). While this has often come at the cost of losing money, J.C. Penney returned to operating margin-breakeven in 2015, and eked out a 2.5% operating profit margin in 2016.

At this point, interest payments are all that stand between J.C. Penney and earning a bottom line profit. In that regard, it's encouraging to see that J.C. Penney has whittled down its long-term debt load by 23% over the past couple of years. If it continues along this path, and holds the line on costs, it's at least conceivable that J.C. Penney will survive. That's more than many other retailers have accomplished, and with diminished bricks 'n' mortar competition, that means there may still be a future for this sub-$5 stock.

Is the same true for Supervalu (NYSE:SVU), a grocery store stock costing less than $5, that also finds itself now in competition with Amazon following the latter's purchase of Whole Foods? That's hard to say.

Supervalu, you see, faces two big threats today. On the one hand is Amazon, now entering the food market to compete with grocery stores via its Whole Foods acquisition. On the other hand is the internecine battle among existing grocery stores, which are struggling to maintain sales growth in an environment of food price deflation. Supervalu might be able to surmount one of these threats, but can it beat them both back simultaneously?

It certainly won't be easy, but Supervalu may pull it off. Despite sales that have been generally declining over the past five years, Supervalu has done a good job of maintaining both operating and net profitability. Last year's profits even reached $650 million -- albeit largely due to earnings from discontinued operations that won't be ongoing.

As a result of those "extra" earnings, Supervalu's low, low P/E ratio of just 1.3 is a bit misleading. Investors considering a purchase of Supervalu shares are probably better advised to focus on forward earnings, which according to data from S&P Global Market Intelligence are currently estimated to be $0.22 per share next year -- giving the stock a 14.5 times earnings ratio. Given the threats it faces, even with a stock price "under $5," I cannot really call Supervalu a ... super value of a stock.

Last but not least, we come to Clean Energy Fuels (NASDAQ:CLNE), the company that's worked so hard and so long to build a network of natural gas filling stations for cars and trucks running on compressed and liquefied natural gas. After many years of losses, Clean Energy finally broke cleanly into profitability last quarter with a big sale of biomethane production (and other) assets to BP. The company booked more than a $70 million profit on that sale, lifting it into the black, albeit temporarily.

Thanks to this windfall profit, Clean Energy Fuels now sports trailing earnings of more than $46 million, and a P/E ratio of just 8.7. Sales are still declining, however, and profits are likely to recede as well once the one-time gain from the BP assets sale roll off the left side of trailing-12-month results. After that, I predict Clean Energy Fuels stock will resume losing money and burning cash, just as it's done for most of the past decade.

Of course, there's always the possibility that Clean Energy will monetize its business by selling off more assets over time. The biomethane assets sale brought in $155 million, and could bring more. With Clean Energy stock currently selling for just 0.73 of its book value, it's possible that future asset sales (or even a sale of the company entirely) will bring in enough cash to cover the company's market capitalization and more. On balance, however, I prefer to invest in companies with the option of earning a living as going concerns.

Crazy as it may seem, I suspect that the company on today's list with the best bet at making that happen -- even if its chances are slim -- is department store J.C. Penney.