Please ensure Javascript is enabled for purposes of website accessibility
Log In Help Join The Motley Fool
Free Article Join Over 1 Million Premium Members And Get More In-Depth Stock Guidance and Research
By Steve Symington - Aug 9, 2018 at 10:15AM

The supermarket chain is being acquired. Here's what investors need to know.

Shares of SUPERVALU Inc. (SVU) soared 57.5% in the month of July, according to data from S&P Global Market Intelligence, after the supermarket chain agreed to be acquired by United Natural Foods (UNFI 0.50%).

To be sure, SUPERVALU stock was actually down modestly for most of last month, then skyrocketed 65% on July 26, 2018 alone -- the day it announced that UNFI will acquire the company for $32.50 in cash, or an enterprise value of $2.9 billion including UNFI's assumption of debt. 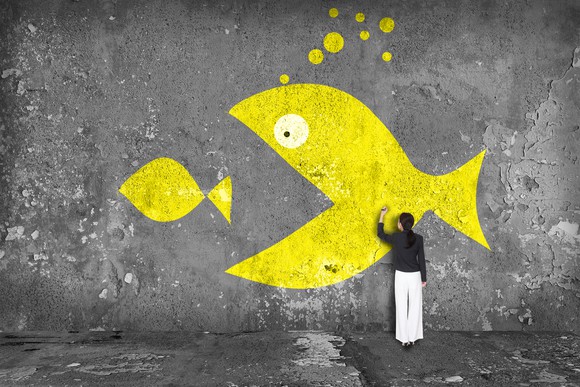 SUPERVALU CEO Mark Gross rightly pointed out that the deal offered a "substantial premium" for stockholders. He also argued that, after implementing an "ambitious strategic transformation" over the past two years, the transaction represents "the best and natural next step for our stockholders, customers, and employees."

Together, UNFI and SUPERVALU will enjoy a more diversified customer base, cross-selling opportunities of their respective product offerings, wider geographic reach and scale, and targeted annual run-rate synergies of over $175 million three years after it closes.

To that end, the acquisition has been approved by both companies' boards of directors, but still requires a thumbs up from both antitrust regulators and SUPERVALU shareholders. Assuming all goes as planned, SUPERVALU expects the purchase to close in the fourth quarter of calendar 2018.

With shares now trading within pennies of the agreed acquisition price -- and assuming waiting a little longer to sell won't result in more favorable long-term capital gains taxes -- I think SUPERVALU investors would do well to take their profits and put their money to work elsewhere.