Ellie Mae (NYSE:ELLI) was one of the big winners of the new housing boom of the 2010s. Its software enabled the financial industry to handle their mortgage loans more easily, and until recently, strong mortgage volume encouraged its clients to expand their business and thereby boost demand for Ellie Mae's software platforms. Yet last quarter, Ellie Mae saw some troubling trends in the industry that suggested that the interest-rate cycle might make the mortgage business a less desirable place to be.

Coming into Thursday's second-quarter financial report, Ellie Mae investors wanted reassurance that the mortgage-software specialist could generate strong revenue growth and solid bottom-line performance even in the face of changing conditions in the mortgage market. Instead, Ellie Mae reported weaker sales growth and a steeper decline in adjusted net income per share than expected, and ugly guidance revisions for the rest of 2017 sent the stock into a tailspin. Let's look more closely at what Ellie Mae said and why it caused investors to panic. 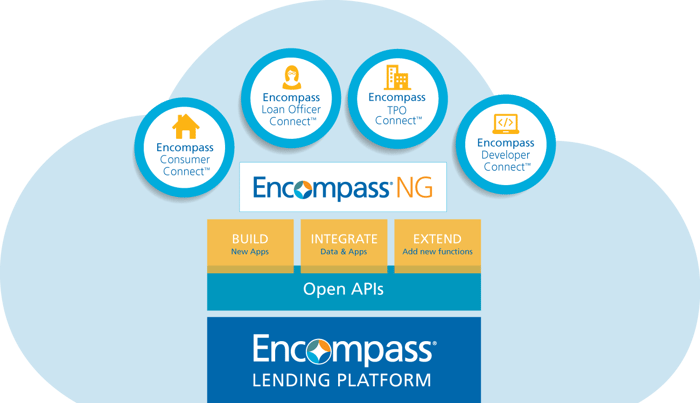 Ellie Mae's second-quarter results didn't look terrible on their face unless you were familiar with what the company has done in the past. Revenue rose 16%, to $104.1 million, but that was considerably slower growth than the 23% rate that most investors were looking to see. Similarly, although adjusted net income was up 8%, to $18.2 million, rising share counts led to a drop in adjusted earnings per share, to $0.51, which was $0.02 worse than the consensus forecast among those following the stock.

Taking a closer look at Ellie Mae's numbers, the mortgage-management-platform provider still saw gains in its business, but they tended to be less robust than in past periods. Ellie Mae brought in 9,600 new seat bookings for its Encompass platform, which helped it increase its market share throughout the mortgage-provider market. That figure was still down more than 20% from what the company brought in during the first quarter of 2017, providing further evidence for the slowdown.

Deteriorating fundamentals showed up in a number of places. Gross margin plunged by almost 5 percentage points, to 63.5%, as a big boost in the costs of producing revenue sent those margin figures higher. Operating expenses didn't grow as much as revenue, with cost controls showing up particularly in overhead expenses and research-and-development expenditures, and that helped to cushion some of the blow to operating margin. A favorable income tax provision pushed GAAP net income much higher, but free cash flow fell by nearly half from year-ago levels.

CEO Jonathan Corr put the changing environment into perspective. "The mortgage market is in the process of transitioning from a refi-centric one to a purchase-driven one," Corr said, and "some of our customers experienced closed loan volume lower than we expected in the second quarter as they dealt with declining refi volume, while the tight housing inventory held back purchase volume." The CEO also pointed to longer-than-expected times for enterprise customers to get on board with the Encompass platform.

Can Ellie Mae bounce back?

Ellie Mae is still optimistic about its future. As Corr put it, "Beyond this year, we expect the market to normalize and for our business to resume stronger growth." Ellie Mae has also put more resources into expanding its technological competitive advantages, putting up even bigger barriers to entry to would-be competitors in the business.

What knocked shareholders for a loop, though, were Ellie Mae's revisions to guidance. For the third quarter, Ellie Mae believes revenue will be between $104 million and $106 million, producing adjusted earnings of $0.38 to $0.41 per share. That's at least a one-third haircut to the bottom-line forecast that investors had coming into the report. Even worse, Ellie Mae made dramatic cuts to its full-year projections. Sales of $400 million to $405 million would be roughly $35 million less than the mortgage-software provider had previously expected, while adjusted income of $1.11 to $1.16 per share reflects a drop of almost 40% from the range that Ellie Mae previously provided.

Shareholders clearly felt uncomfortable with those moves, and the stock plummeted 22% in after-hours trading following the announcement, giving up all of its gains for 2017. The key issue for Ellie Mae is whether rising interest rates do indeed lead to a multi-year lull in refinancing activity. That's far from certain, but if it happens, then investors will have to watch to see whether financial-institution customers start to desert Ellie Mae's Encompass platform in order to make their own operations leaner.