Enviva Partners (NYSE:EVA) looks like an incredibly compelling stock to own if you are looking for a high-yield investment. It has a lot of the qualities you want from a master limited partnership, and it has a dominant position in a growing market. This past quarter, though, the company hit a speed bump that may put some investors on edge.

Let's take a look at what happened this past quarter at Enviva and whether this slight dip in results is merely a sign of growing pains or something that could be problematic down the road. 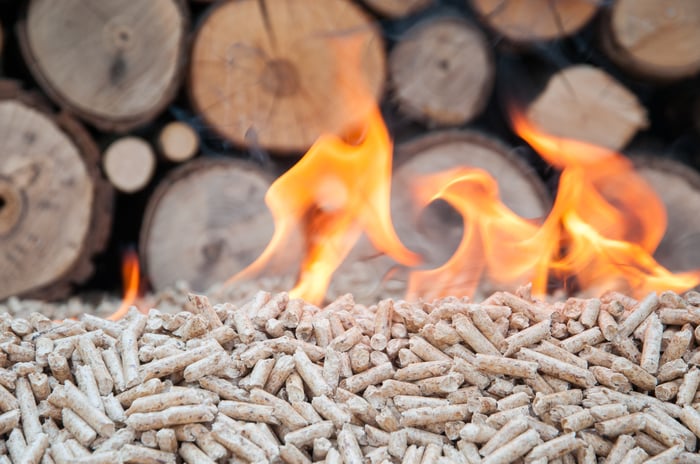 Investing in MLPs like wood-pellet producer Enviva is all about consistency. These companies' revenue and cash flow should remain steady from quarter to quarter and grow over time as new assets get folded into the business. So when Enviva reports a decline in income from operations and distributable cash flow on a year-over-year basis, some minor alarm bells should be going off in investors' minds.

If we dig deeper into the company's results, though, we see that this could just be a short-term issue. According to management, some of its wood processing plants are not currently running at full capacity. The company is in the process of upgrading several facilities to improve pellet quality such that they meet handling requirements overseas. As these plants get put back on line, these lower income and cash flow results should correct themselves in the coming quarters.

Even with the drop in cash flow, Enviva's distribution coverage ratio for the quarter was 1.0, which means that things are a little tight right now, but it isn't necessarily a dire situation.

Aside from this seemingly temporary issue, there are other signs at Enviva that the business is doing well. Per-ton gross margins for pellets were up in the quarter, and management signed a memorandum of understanding for a take-or-pay contract with a biomass facility in Japan that will be a 650,000-metric-ton-per-year contract. The deal won't start until 2022, but it gives Enviva a growth runway and plenty of time to increase capacity to meet that demand.

Enviva is also in negotiations with its parent company to acquire a port in Wilmington, North Carolina. Once fully operational, the port will be able to handle 3 million metric tons per year and will be a growth lever that Enviva can pull by adding more processing plants in the region.

In Enviva's press release, CEO John Keppler addressed the issue of lower cash flow from plant downtime and explained how he thinks that it will be a forgotten issue by the end of the year.

With continued growth in our cash flows, we were pleased to announce our 8th consecutive distribution increase. In order to extend our leadership in a rapidly growing industry, we implemented several process improvements that temporarily reduced plant utilization. With those enhancements largely in place, and given the robust fundamentals of the business, we remain on track to distribute at least $2.36 per unit for full-year 2017 and expect to maintain our track record of quarterly distribution growth into 2018.

While short-lived, the impact of the process improvements affected our second quarter financial results and expectations for part of the year. Given what we are seeing at the plants as they complete these changes, we anticipate a strong fourth quarter and to exit the year at a run rate on production volume and financial performance that exceeds the expectations we set at the beginning of the year.

If this lower plant utilization rate truly is just a short-term ordeal that gets corrected in a couple of months, then we can give Enviva a mulligan on this quarter's result. However, it will be worth checking back on earnings to make sure that this is indeed a temporary issue. If the company is consistently running into operational issues that eat into cash flow, then we should consider whether Enviva will be able to meet its ambitious growth goals.