A little over 158 years ago in Chicago, Perry Brink began transporting travelers' luggage from railroad stations to hotels on a horse-drawn wagon. Since that first trip, Brink's Company (NYSE:BCO) has grown into a cash-management powerhouse with a market cap of almost $3.9 billion.

Brink's is something of an anomaly in today's fintech world: While most fintech and payments industry players have focused with a laser-like intensity on ridding the world of cash, Brink's has grown a global empire around paper currency. While the company has had its share of struggles in the past, Brink's strategy to focus on cash services has paid off enormously for investors this past year. Shares have more than doubled, crushing the market in the process.

The stock price has simply followed the company's performance. When the company recently reported its second-quarter earnings, its revenue had increased 9% to $806 million. Its non-GAAP EPS jumped an incredible 64% to $0.64. All this while Brink's operating profit margin increased 240 basis points to 7.9%. String together a few quarters like that and any company's stock price would see significant appreciation!

How has the company performed so well in a digital world? With new CEO Douglas Pertz in place for just a little over a year, the company has implemented a new strategy with two overriding objectives: drive revenue growth through acquisitions and improve margins via a variety of companywide initiatives and improvements. 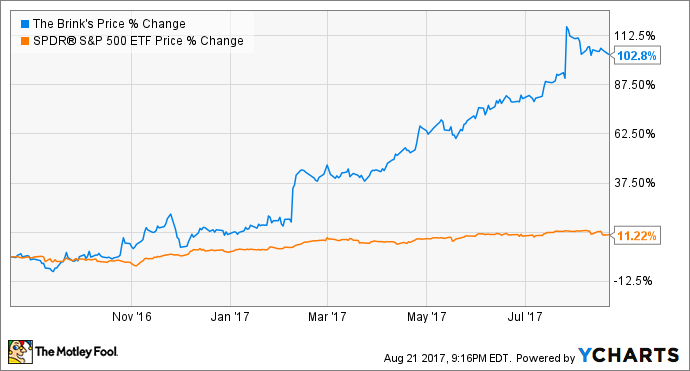 Brink's new management believes the company can deliver growth by making accretive acquisitions with potential for cost synergies. So far this year, Brink's has closed on four acquisitions and is expected to close on a fifth later this year. In the company's second-quarter conference call, Pertz called these types of acquisitions "a big part" of Brink's story and revealed that the company was still actively pursuing additional acquisition opportunities.

Brink's latest acquisition, and its largest this year, highlights the qualities it looks for in potential targets. In July, Brink's announced it would purchase Maco Transportadora de Caudales S.A, a company that provides cash-in-transit and money processing services in Argentina, for about $209 million in an all-cash deal. On the company's second-quarter conference call, from the transcript provided by S&P Global Market Intelligence, here's what Pertz emphasized about the acquisition:

Maco's cash-in-transit and money processing operations will be integrated with our existing operations in Argentina, the fastest-growing country in our most profitable segment, South America ... We'll move quickly to achieve substantial cost synergies over the next two years, which should result in a post-integration multiple of about 6x adjusted EBITDA. We're excited about Maco and our future in Argentina. Maco solidifies our already strong No. 2 position and will immediately strengthen our customer base and route density. We expect it to be slightly accretive to net income this year, and as demonstrated in our increased 2019 guidance, a significant contributor to future earnings and cash flow. 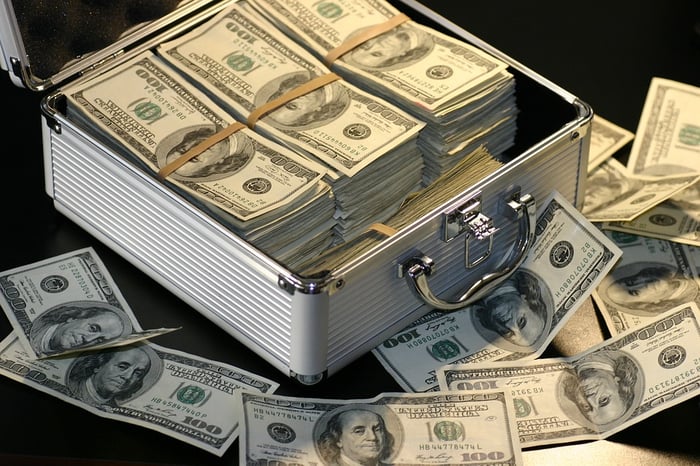 Don't tell Brink's cash is dead. The cash management and security company has crushed the market this past year. Image source: Pixabay.

Brink's progress with margin expansion was definitely one of the things management wanted to highlight in the conference call. Pertz practically led off his prepared remarks by saying "growth was led by significant margin improvement in the U.S., Mexico, Brazil and Argentina."

While there are seemingly endless things the company is doing to improve its margins, one of the primary areas it is focusing on is the thousands of heavily armored trucks that Brink's drivers motor around the world's cities every day. On this front, Brink's management had some big news. Later this year, the company expects to put 200 new trucks with a new wrinkle in their design on the road: separable body and chassis.

With this feature, Brink's says it will be able to replace trucks in the future at about 40% of the cost it takes now to replace a truck. This is because a truck's engine and chassis will naturally need replacing far quicker than the truck's armored body. The new trucks will also reduce repair costs and accommodate one- and two-person crews.

Is Brink's gonna keep on truckin'?

In 1891, the company made its first shipment of money -- six 61-pound bags of silver dollars across Chicago. Brink's now operates almost 12,000 vehicles in 100 countries. There is no doubt the company has seen a lot of growth in the last century and a half. The question for investors now, though, is whether the company's best days of growth are still ahead of it.

I am usually wary of companies that want to grow through acquisitions. Yet, I like the bolt-on nature of Brink's acquisitions and that they're easily integrated into the company and immediately accretive to earnings. In the second quarter, the company's net debt increased about 15% year-over-year to $360 million. This is definitely something for investors to watch in the quarters and years ahead, as new acquisitions will probably add to that number.

I also like management's long-term focus. While the company won't see a benefit to changing out its fleet to trucks with separable body-and-chassis designs for years to come, it appears to be a smart move that will pay dividends for the long term.

The company is also currently targeting non-GAAP EPS of $4.25 in 2019. That gives the company a forward P/E ratio of about 17.8 based on today's price and 2019's earnings target. While I believe it is a good bet management raises its 2019 guidance in the future, it still seems a bit steep.

For now, investors should watch the debt levels and, perhaps wait for a bit better valuation before jumping in. That being said, Brink's new management seems to have found a winning strategy in a fragmented market.