Please ensure Javascript is enabled for purposes of website accessibility
Log In Help Join The Motley Fool
Free Article Join Over 1 Million Premium Members And Get More In-Depth Stock Guidance and Research
By Rich Smith, Neha Chamaria, and George Budwell - Oct 21, 2017 at 11:33AM

It may not be obvious now, but one day soon you'll be glad you bought these stocks.

"One thing I have learned in my painful career as a gambler is that
bragging when you get lucky and win a few games will plunge you into
gloom and unacceptable beatings very soon. It happens every time."
-- Hunter S. Thompson

That quote right there seems to suggest that "bragging" about owning a stock is tempting fate. But what about simply being proud of an investment well-made? And being proud of thinking straight to develop a sound investing thesis, backing up your convictions with a cash investment (i.e. putting your money where your mouth is), and someday seeing your investment pay off? 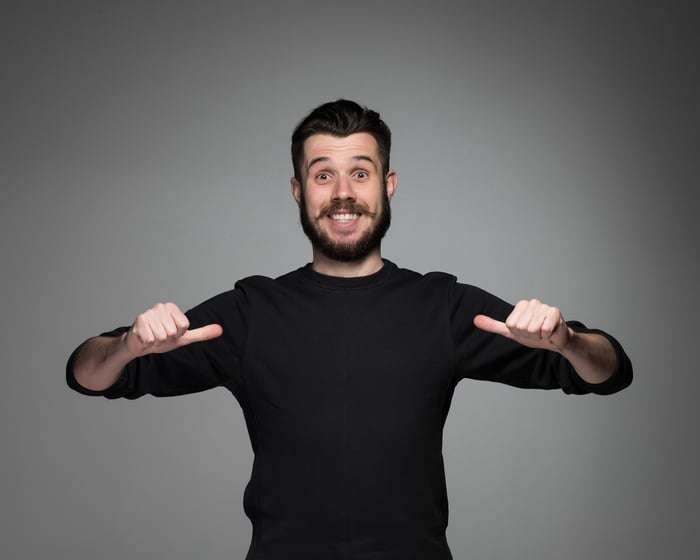 Who's got two thumbs and just made a great investment? This guy! (And now it's your turn.) Image source: Getty Images.

Benefit from the global shift to plastic money

Neha Chamaria (MasterCard): One crucial element that any brag-worthy-stock-in-the-making must possess is solid growth prospects, which is possible only if the underlying company deals in an indispensable product or service, owns a breakthrough product or technology, or is poised to ride an emerging trend. Payments-processing giant MasterCard belongs in the third category, which is why it's likely you'll brag about owning the stock someday.

MasterCard is one of the two largest payments-processing companies in the world, alongside Visa. Countries across the world, including some of the fastest-growing nations like India, are witnessing a digital revolution with more and more people going cashless and virtual with their payments. That creates the perfect growth environment for MasterCard, which earns money every time someone swipes its branded credit and debit cards, no matter in which part of the world it happens.

Because MasterCard's business isn't hugely capital intensive, the company is earning hefty margins, making boatloads of money, and maintaining a strong balance sheet. Management is aggressively advancing its payments technology, while extending partnerships with other payments companies like Paypal, with greater focus on high-potential markets like India. For example, CEO Ajay Banga recently revealed that he's looking at acquisitions in India and plans to invest $800 million in the country in the next four-to-five years.

MasterCard has been a seven-bagger in the past decade, and I wouldn't be surprised if it continues to retain its multibagger stock status in the coming years. No matter which way you look at it, MasterCard has all the ingredients of a brag-worthy stock.

A new day has dawned in cancer treatment

George Budwell (Bellicum Pharmaceuticals): The second major wave of cancer immunotherapies have now become reality with the Food and Drug Administration (FDA) approval of both Novartis' Kymriah and Gilead Sciences' Yescarta in recent months. Both of these potent new treatments are types of chimeric antigen receptor T-cell therapies, or CAR-Ts for short. What's novel about CAR-Ts is their unique ability to essentially cure some patients with hard-to-treat forms of blood cancers, like non-Hodgkin lymphoma.

Over the next eight years, industry experts believe that literally dozens of additional T-cell based therapies will come to market for a variety of liquid and solid tumors. Most importantly, this second generation of modified T-cell therapies should be safer and even more potent than their predecessors. That's where the small-cap, and largely unknown, biotech Bellicum Pharmaceuticals comes into the story.

Bellicum might sport a market cap that's just a tiny fraction of the leaders in this emerging field, but its molecular switch platform may ultimately give it a significant competitive edge over the rest of the field. CAR-Ts, while extremely potent, also suffer from a handful of serious side effects like cytokine release syndrome and neurotoxicity that might limit their ability to be used in earlier lines of treatment.

To address this lingering safety issue, Bellicum has incorporated a molecular switch into its modified T-cell therapies that can be triggered after infusion via a small molecule known as rimiducid. The current leaders in the CAR-T space lack any such mechanism to control their therapies after a patient has been treated.

Now, Bellicum will need to raise capital eventually to advance its pipeline toward a regulatory filing, and the company is still a ways away from reaching this transformational event. But when it does, this small-cap biotech has the best-in-class technology to quickly surpass the top dogs in the high-value CAR-T space and potentially capture the lion's share of the market in the decades to come.

This company owns the coolest company in space -- and you can, too

Rich Smith: (Alphabet): Shares of Alphabet stock are up 22% over the past year, beating the average 20% return on the S&P 500. Even so, I doubt there's a whole lot of "bragging" going on among Alphabet shareholders after the company's 28% decline in reported profits last quarter.

Make no mistake: I personally think that Alphabet is doing just fine and will weather the storm of European regulators and fine-imposers that caused that big earnings decline. As the biggest company in internet search and a leader in web browsing, mobile phone operating systems, and so much more, Alphabet is just a standout company. But the thing I think will really become brag-worthy about Alphabet stock someday still isn't widely recognized yet.

I'm talking about Alphabet's genius move to buy a 7.5% stake in Elon Musk's SpaceX. That purchase, made back in 2015 when SpaceX was being valued at $10 billion in implied market cap, has already paid off in spades. At last report, SpaceX's valuation was put at closer to $21 billion.

In less than two years, Alphabet has scored a two-bagger return on its SpaceX investment, and I think the story's only going to get better. SpaceX is already launching more rockets annually than most nation-states do, and more than any other private company. The better SpaceX does, the more I think Alphabet owners will have to brag about their part-ownership of SpaceX.