SpaceX is not public, and may never IPO -- but you can still own a piece of it.

Everyone wants a piece of SpaceX. But how can you invest in SpaceX stock?

In 2016, Amazon.com ( AMZN 2.80% ) "competitive intelligence tools" subsidiary Alexa (yes, Alexa has a side job) reported that SpaceX's website had just become one of the most popular corporate websites among privately held companies. As measured by "unique visitors," more people were looking into SpaceX than any other "unicorn" stock on the planet.

Don't expect that to change anytime soon. After becoming the first private company to put a spaceship in orbit, Elon Musk's groundbreaking space venture has proceeded to rack up an impressive list of other "first" achievements: First company to launch a payload into orbit, then land its rocket back on Earth. First to land a Falcon 9 rocket on a landing pad at sea. First to re-launch a used rocket, and first to put forth a workable plan for colonizing Mars. If all goes well, SpaceX could even become the first company to reland three boosters from its Falcon Heavy rocket -- simultaneously.

Calculating the odds of a SpaceX IPO

But will SpaceX also become the first space company to conduct a big IPO in the 21st century and give investors a chance to invest in its stock directly? Musk still seems reluctant. Speaking at a space conference in Guadalajara in 2016, he dismissed any interest in reaping billions by putting SpaceX on the stock market. To the contrary, the internet millionaire-turned-electric cars-billionaire said that it was actually his biggest fear that SpaceX might "somehow get taken over by investors who just want to maximize the profit of the company and not go to Mars."

That statement threw cold water on investors hoping to one day invest in SpaceX stock. And yet would you believe that it's possible to invest in SpaceX today -- before the company even IPOs? 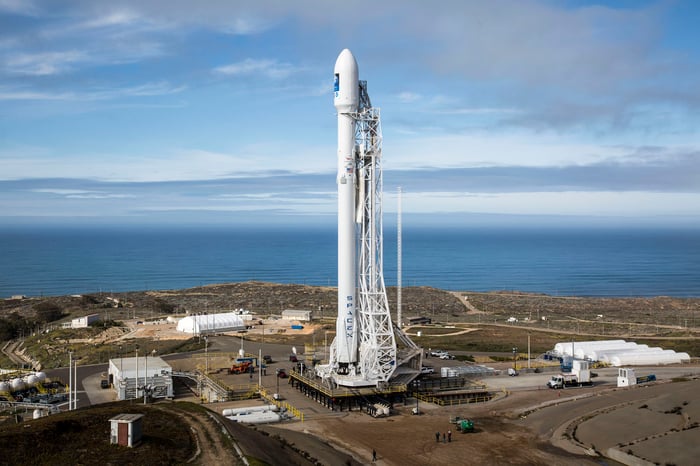 Investors see blue skies for SpaceX -- but how can you invest in SpaceX stock? Image source: SpaceX.

It's true. Thanks to Google's 2015 investment in SpaceX, Google parent Alphabet ( GOOG 2.95% ) ( GOOGL 2.87% ) now owns a 7.5% stake in SpaceX. As a result, it is now possible to invest in SpaceX -- by investing in its part-owner, Alphabet. (As a bonus, you also own a whole lot of Google, YouTube, the Android operating system, and a nascent self-driving car project besides.)

At the right price, buying Alphabet stock in order to own SpaceX stock might even be a smart financial move. Consider: In 2016, we learned that after several years of boasting that it was both "profitable and cash-flow positive," SpaceX was actually neither of those things. Not profitable, and not generating cash -- but rather burning it.

That hardly sounds like the kind of stock investors should be thinking of trading.

SpaceX's resurgence in 2017 may have improved the company's financial fortunes, or it may not have. So far, SpaceX isn't telling. But just in case SpaceX is still losing money, it seems to me that diversifying one's investment in SpaceX by also owning wildly profitable Alphabet stock is a smarter way to own a piece of SpaceX.

Valued at $735.8 billion today, Alphabet reported net income of $12.7 billion over the past 12 months, despite taking a big hit from tax reform. Google's actual cash profits -- its free cash flow -- are even stronger. According to data provided by S&P Global Market Intelligence, over the past year Alphabet has generated $23.9 billion in positive free cash flow, which is nearly twice its reported profit. And as cash has piled up on its balance sheet, the enterprise value of Alphabet stock has shrunk to the point where the whole company, net of cash, now costs less than $638 billion, or about 26.7 times trailing free cash flow.

Admittedly, even 26.7 times FCF isn't a particularly cheap way to invest in SpaceX stock. But neither is it unreasonably expensive. Most important, for the time being, it's the only way you can practicably invest in SpaceX.