And it will cost more than you think.

Last Tuesday, in Guadalajara, Mexico (yes, really), Elon Musk took the stage at the 67th International Astronautical Congress to lay out his vision for Mankind's colonization of Mars. As we've come to expect from the Tesla Motors (TSLA -8.62%) CEO (who also wants to merge Tesla with SolarCity (SCTY.DL) to form a globe-spanning goliath making everything from electric cars to electric houses), it was a big vision, and chock-full of big numbers. 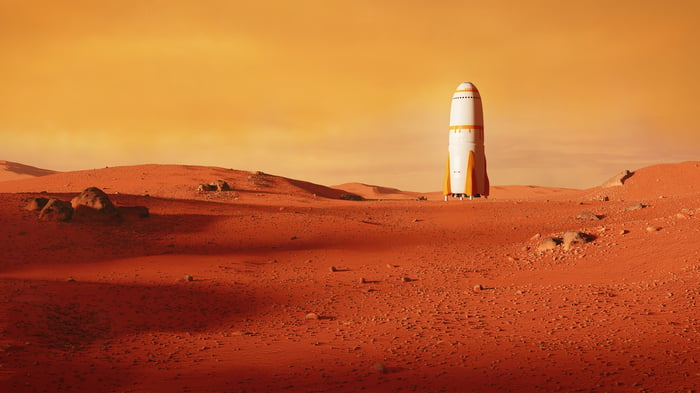 Other writers, for other outlets, have already done a fine job writing up the details of Elon Musk's hour-and-30-minute talk. They've covered everything from the design of new SpaceX "Raptor" interplanetary engine to the mechanics of launching spaceships into orbit, and refueling them there with tankers full of "deep cryo-methalox" fuel, to his longer-range plans to establish fuel depots all around the solar system -- turning Musk's Mars Plan into a plan to circulate SpaceX spaceships throughout the solar system.

This summary from Aviation Week, for example, will give you a good overview of the details, and there's no need for me to rehash them here today. Instead, here's a quick rundown of three important numbers Musk laid out last week -- followed by an explanation for why the most important of these numbers is so important to investors.

Were we to rely on Apollo-era technology, which is basically what NASA is doing right now with its plan to send astronauts to Mars by 2033, Musk ballparks the cost of such a venture at roughly $10 billion per person. Congress, in contrast, has expressed worries that with the way NASA is going right now, the total cost of such a mission might reach $500 billion.

$10 billion a head is obviously a steep price to pay for Mars exploration -- and far too expensive for mankind to contemplate Mars colonization, which is Musk's ultimate goal. To make the economics work, and to ensure that all the people who want to go to Mars can afford to go, it's necessary to drop the price to $200,000 per person, a 5,000,000% cost reduction.

This is key, because according to Musk, it will take...

One million colonists. That's what Musk believes is necessary to build a viable, self-sustaining civilization on Mars, and make "humans a multiplanetary species." But it also poses a dilemma.

Musk is designing his Mars initiative around a massive spaceship capable of carrying 100 humans initially. The first such spaceship to carry humans to Mars will probably travel solo, with a target date of 2020. But ultimately, Musk intends to colonize Mars caravan-style. He will assemble a fleet of 1,000 spaceships in Earth orbit, send it to Mars, deposit 100,000 colonists, then return to Earth for a refill.

Lather, rinse, and repeat this process, and it will still take ten such caravans to reach Mars' target population. Assuming both outbound and inbound trips take place every two years, at the times when Earth and Mars are at their closest proximity, SpaceX will require at least 40 years to fully colonize Mars -- and the process could take as many as 100 years if SpaceX has to take time to ramp up operations to 1,000 ships.

Speaking of which, now it's time to discuss the most important number Musk proclaimed last week:

The first time Musk mentioned "$10 billion" last week, he was referring to the cost of sending one man to Mars using established NASA technology. But $10 billion is also the amount of money Musk says he will require to get the Mars mission rolling -- and make it possible to send 100 colonists to Mars. Developing the first Mars Colonial Transport, the massive, 42-engine core engine needed to lift it from Earth, the refueling tankers to gas it up in orbit, and all of the other technical elements needed to make the first manned trip to Mars, says Musk, will cost about $10 billion.

In other words, for the same money NASA would need to send one man to Mars, Musk says he can send 100 -- which is an impressive boast. And yet, $10 billion is still a big number, and probably too big for SpaceX to afford on its own. Currently, Musk says SpaceX devotes less than 5% of its resources to planning for a Mars mission -- a matter of just "a few tens of millions of dollars" a year.

Granted, a couple years from now, once the last kinks have been worked out of SpaceX's Falcon 9 rockets, its Falcon Heavy launch vehicle is up and running, and its Commercial Crew contract is delivering astronauts to the International Space Station regularly, and safely, SpaceX expects to be able to shift gears and devote more effort to the Mars mission. But even then, Musk says only "a couple hundred million dollars a year" will be available for investment in the Mars project.

Even assuming SpaceX can come up with $200 million or so in excess profits, and spend them on furthering its Mars ambitions, at that rate, it would take the company 50 years to come up with the $10 billion investment necessary. (And then another 40 to 100 years needed to complete colonization of the Red Planet.)

A public-private partnership -- emphasis on "public"

Recognizing all of this, Musk acknowledges that his only real hope of implementing his Mars plan, much less the broader goal to fly spaceships all around the solar system, is through a "public-private partnership." NASA has an annual budget of approximately $20 billion per year. Coupled with SpaceX's business plan, that would be more than enough money to finance making a go of the Mars mission.

Of course, currently, NASA has its own plan for sending astronauts to Mars -- and it's unlikely to cut it short just to provide Musk the funds he needs. Absent significant "public" support from NASA, Musk may be forced to seek "public" support of another variety. Namely, an initial public offering.

Consider: Musk has taken two of his companies public already, SolarCity and Tesla. According to data from S&P Global Market Intelligence, the market is valuing SolarCity at 3.6 times sales, and Tesla at 6.6 times sales. As near as we can figure, though, investors in privately held SpaceX seem to be valuing the company in excess of nine times annual sales.

Result: As a privately held company, SpaceX is currently worth about $12 billion, with most of that value locked up where investors cannot reach it. By taking SpaceX public, though, Musk could very likely raise additional billions needed to fund his Mars mission.

Granted, Musk himself insists his "biggest fear" is that SpaceX will "somehow get taken over by investors who just want to maximize the profit of the company and not go to Mars." But if he really wants to get there, having an IPO for SpaceX may be his very best chance.

Fool contributor Rich Smith does not own shares of, nor is he short, any company named above. You can find him on Motley Fool CAPS, publicly pontificating under the handle TMFDitty, where he currently ranks No. 282 out of more than 75,000 rated members.

The Motley Fool owns shares of and recommends SolarCity and Tesla Motors. Try any of our Foolish newsletter services free for 30 days. We Fools may not all hold the same opinions, but we all believe that considering a diverse range of insights makes us better investors. The Motley Fool has a disclosure policy.