Tesla Motors is betting that customers will want to buy a car, a solar power system, and energy storage in one big purchase at Tesla showrooms. Image source: Tesla Motors.

Tesla Motors (NASDAQ:TSLA) has officially made an offer to buy SolarCity (NASDAQ:SCTY.DL), which would combine Elon Musk's clean-energy empire into one company. News of the deal has sent SolarCity stock surging higher and Tesla Motors shares plunging by double digits in early trading Wednesday.

Combining an automaker with a solar panel installer will be complex, and combining two companies that are currently losing money adds to the risk. Here's why I think this is a marriage that would end in disaster.

SolarCity doesn't have its own house in order

Tesla Motors is buying SolarCity at a discount compared to where shares traded a year ago. But a stock doesn't fall more than 60% for no reason: SolarCity is already facing a host of challenges this year. 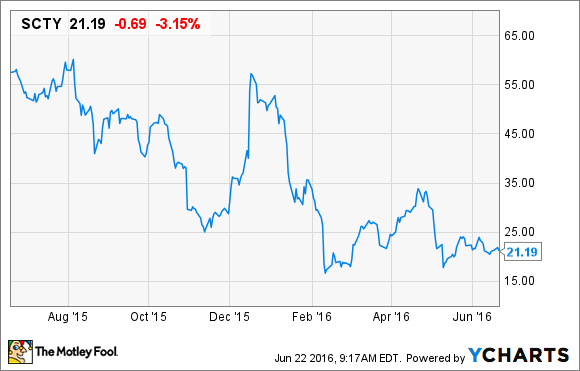 SolarCity badly missed its own installation guidance the last two quarters, and has seen its costs skyrocket as a result. And the market is starting to question whether or not the company is adding as much value for shareholders as it's formerly said. 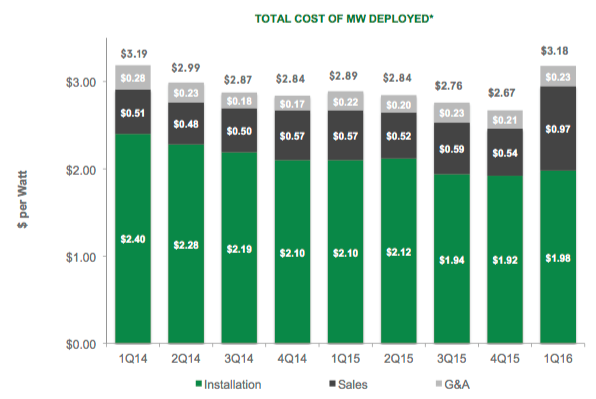 There are three factors that drive SolarCity's value proposition for investors, and they're all being questioned by investors at the moment. First is that it has lower costs than competitors, which is being challenged by local installers who can undercut SolarCity's cost structure.

The second driver has been SolarCity's low capital costs, which allow it to sell leases and power-purchase agreements to customers at lower prices than competitors. Those contracts are then chopped up and sold to investors in the form of tax equity, securitizations, and other financing deals. It's this ability to finance more than the cost of installing a solar power system that Elon Musk is talking about when he says SolarCity will be cash-flow positive this year. But if capital markets close to SolarCity, as they did to SunEdison and Vivint Solar when those two solar companies tried to merge, that cash-flow positive business can go negative quickly. It requires open capital markets month after month to keep SolarCity going.

The third thing SolarCity points to as a value-creation metric is the long-term contracts and high credit scores of its customers. These allow it to create a long-term cash flow business based on multidecade relationships with its customers. These are the relationships that Tesla wants to exploit by cross-selling cars and energy storage. But the solar market is moving away from leases to cash sales or loans, and investors are questioning whether a homeowner will be able to transfer a 15-year-old lease to a buyer if they sell their home. So, the market is discounting the value of these long-term contracts because they may not be as safe as they appear.

In 2016, investors are questioning all of SolarCity's theoretical advantages in the rooftop solar market. And that's why the stock is dropping. These are structural challenges that Tesla Motors won't be able to fix, and may actually make worse.

The problem for SolarCity under Tesla's umbrella

On top of SolarCity's own problems, I don't think its future meshes well with Tesla Motors. Musk talked at length about Tesla's Powerwall being added to SolarCity's solar power systems. But there are very few locations in the world where residential energy storage makes any sense financially. And even an aggressive analysis of the industry shows that it'll be at least five to 10 years before it does. There's simply no way to make money on energy storage systems broadly today, and worse yet, there's no path to financing energy storage systems in a way that's as simple as SolarCity's $0-down lease product, which drove solar adoption.

The market is also moving away from SolarCity's preferred business model. The leases and power-purchase agreements that locked customers into solar energy contracts for 20 years were a good way to get cautious customers into solar with no money down while the industry was in its early growth phase, but now, customers want to buy systems with cash or loans -- a method that saves them considerably more money over the long term, and allows them more choice in what they get installed on their roofs. CEO Lyndon Rive admitted that the lack of a loan product in the first quarter cost the company sales, and was one reason it had to lower 2016 guidance. The rising popularity of sales and loans will also make rooftop solar more competitive on a cost basis, which may not be good for SolarCity, and a merger with Tesla doesn't change that.

No matter what its sales model is, SolarCity is incredibly reliant on capital markets to fund solar power systems. Based on current guidance, the company would need around $3 billion of financing to get through the year. If capital markets shut down to SolarCity, as they did to SunEdison after it said it would acquire Vivint Solar, the company could need billions in funding annually from Tesla Motors. That's money Tesla doesn't have.

I don't see how Tesla Motors makes SolarCity a better company, and it may actually complicate both of their businesses.

Where are the synergies?

Manufacturing of solar panels and cars are two different worlds. I don't see how the companies would see any synergy at all on the manufacturing front.

Musk says he'll move solar sales into Tesla Motors showrooms, but it's not clear that car buyers will want to sign a 20-year lease or figure out how to make money on an energy storage system at the same time as they buy a car. They're two very different decisions, and I don't see customers making both on the same trip to the showroom.

This also seems to be a confusing move for SolarCity's sales force. They're primarily soliciting business today with tactics like door-to-door sales, telemarketing, and booths in retailers to keep volumes flowing through the system. The showroom would add to those sales avenues. But the flip side is that Musk says showrooms would allow lower sales costs in the solar business, so does that mean layoffs are coming to SolarCity's sales organization? I'm not sure these sales organizations have the synergies Musk sees right now.

Elon Musk is selling the acquisition of SolarCity as a vertical integration of solar to energy storage to electric vehicles. But I think it's a stretch to say that the sales or manufacturing of any of those devices work in tandem.