Please ensure Javascript is enabled for purposes of website accessibility
Log In Help Join The Motley Fool
Free Article Join Over 1 Million Premium Members And Get More In-Depth Stock Guidance and Research
By Travis Hoium - May 10, 2016 at 12:00PM

The solar pioneer reduced 2016 guidance, and that has investors worried about the future.

SolarCity Corp's (SCTY.DL) woes continued in the first quarter of 2016 as slowing growth, rising costs, and falling value creation hit the company's operations hard. For the third straight quarter, there were plenty of excuses, from the timing of sales to regulatory uncertainty, but the disappointing results are becoming a trend. And it's time to start taking the company's challenges very seriously.

214 MW of solar systems were installed in the quarter, which was higher than the 180 MW guidance due partly to a 14 MW project that was completed earlier than expected. But bookings were about 150 MW lower than expected, and that's making the second quarter look extremely weak. Management now expects 185 MW of installs in Q2 and full-year 2016 guidance was reduced from 1.25 GW to 1.0 to 1.1 GW. Notice that the guidance reduction was even bigger than the 150 MW bookings miss in the quarter. Management said there were a few reasons for the miss, some of which are very notable.

When SolarCity doesn't hit its booking goals, it has to spread sales costs over a much smaller base. And that led to the sharp increase in cost per watt you see below. 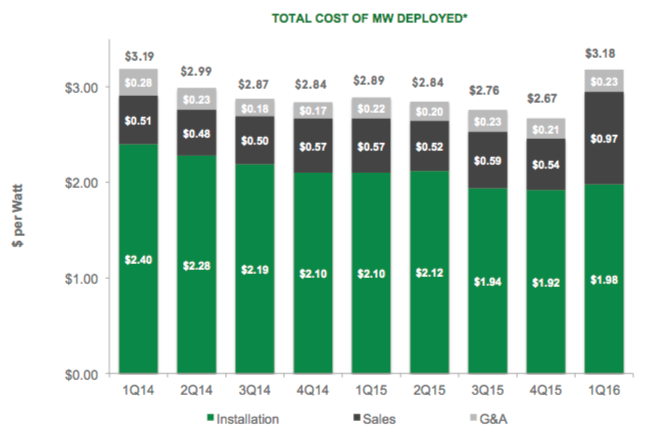 Management doesn't think these higher costs will persist and pointed to falling installation costs year over year, but the big concern in 2015 was rising sales costs. There's no evidence yet that isn't still a problem.

What was encouraging was SolarCity monetizing $3.12 per watt for solar systems in the quarter, which should be above its long-term cost structure trend you see above. If it can finance more than its costs each quarter, it'll be cash flow-positive and be able to fund its operations without adding debt or selling shares to raise capital.

Why these numbers are a big deal
The problem with the first-quarter numbers is that they show every flaw in SolarCity's business model. The company "owns the trucks," meaning everyone from the sales person to the installer is a SolarCity employee, and that requires constant volume to keep the business going. One bad quarter -- or heaven forbid, a bad year -- and the machine comes tumbling down.

SolarCity has also been almost completely reliant on long-term power purchase agreements (PPA) and leases, but the market is moving more toward loans (more on that in a minute). That led to lost sales in the first quarter.

SolarCity also has little differentiation from competitors, which is starting to mean it will have to compete more on price until it gets its high-efficiency solar manufacturing plant up and running. SunPower (SPWR 3.20%), on the other hand, said its residential and commercial solar businesses were growing like crazy in the first quarter. The company doesn't "own the trucks"; offers PPAs, cash sales, and loans; and has differentiated technology. In fact, SunPower had glowing comments about its residential and commercial business for all of 2016, so SolarCity's plethora of excuses why its growth is slowing is concerning considering what competition is saying.

If SolarCity is losing market share in its core markets to SunPower, it's a paradigm shift in the solar industry.

The loans are finally coming
One adjustment management made recently was adding a loan product, which was sorely needed. Based on the earnings presentation, there will be two fixed payment options for customers, a 10-year loan with a 2.99% interest rate and a 20-year option with a 4.99% interest rate. Management said they would be working with lending partners, but didn't mention who they were.

This will have some impacts both positive and negative for SolarCity. On the plus side, the company will sell these systems and get cash and margin upfront. This frees up the balance sheet and potentially gives SolarCity some predictable cash flow going forward.

The big question mark comes on the competitive front. If SolarCity is offering loans, it's then competing based on the pricing of its solar systems. That's much easier for customers to compare apples-to-apples than a lease or PPA, where SolarCity had borrowing advantages on the back end. Will SolarCity price systems attractively versus competitors? Will that mean low margins? Time will tell.

SolarCity needs a focus
One of the telling parts of the conference call after earnings came out was an analyst asking if it was time for SolarCity to start transitioning to a cash-generation business model instead of focusing on growth. As I outlined above, the company is now able to generate cash flow from its business with multiple financing options, and the loan product will add another great option for cash flow.

But Lyndon Rive said that once SolarCity gets its current house in order, it will put the pedal to the metal on growth again. And that may be the company's core weakness. It's built a good residential business, and now that growth has slowed and it's actually generating cash flow, it may be time to pull the reins back on growth. But that's not enough for the current management team -- and that could come back to haunt investors someday.