The third quarter was a tough one for the travel industry, with major hurricanes hitting key travel areas like Florida, Texas, and the Caribbean. Peers throughout the online travel realm had already given poor reports of their financial success during the period, but leading travel website provider Priceline Group (NASDAQ:BKNG) had hoped to overcome those negatives to produce solid growth and continue a long streak of success.

Coming into Monday's third-quarter financial report, Priceline investors had every expectations that the company would be able to keep delivering the gains in revenue and earnings that they had come to rely on from the travel giant. Priceline did manage to post impressive growth, but the results didn't live up to the exceptional performance that some shareholders demand. Let's look more closely at how Priceline Group did and what's ahead for the rest of the year from the travel specialist. 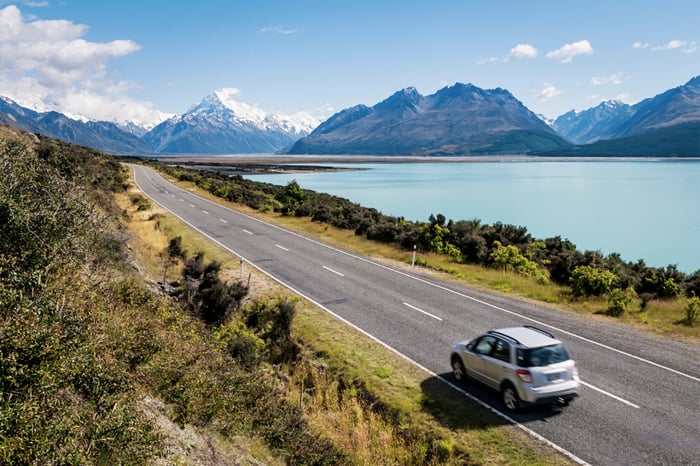 Priceline's third-quarter results remained good despite tough conditions. Revenue rose 20% to $4.43 billion, which was markedly higher than the $4.34 billion consensus forecast among those following the stock. Similarly, adjusted net income of $1.76 billion was up 19% from year-ago levels. That produced earnings per share of $35.22, which was greater than the $34.25 per share that most investors were expecting to see.

Priceline's key metrics continued to show a steady pace of expansion for the company, but they also showed signs of slowing in key areas. Overall gross bookings were up 18% from year-earlier levels to $21.76 billion, benefiting from about 2 percentage points of favorable foreign currency impacts. International operations had a slightly larger contribution to gross profit during the quarter than domestic business, but the difference was again very slight.

The key area that raised eyebrows was once again the segment breakout figures. Hotel sales growth continued to decelerate, with 177.5 million room nights representing growth of 19% year over year, its first sub-20% reading in the past two years from that key metric. Even more troubling was the fact that rental car days and airline tickets dropped from what Priceline sold in the second quarter of 2017, and year-over-year growth of just 5.5% in rental cars to 19 million car-days also marked a much slower growth rate than the company has seen since mid-2015. Airline tickets fell almost 12% year over year to 1.7 million, continuing a long string of declines on that side of the business.

CEO Glenn Fogel tried to point toward the company's successes. "Booking.com showed continued momentum," Fogel said, "with approximately 1.5 million properties on its platform, up 41% over last year." Pointing to the nearly 27 million potential bookable rooms that it has at its disposal, the CEO believes that Booking.com has the largest and most diverse set of accommodations available in the industry.

Can Priceline bounce back?

Interestingly, the press release announcing the results made no mention of the hurricanes that hit during the period. Instead, the company focused on general strategic moves for its future success. As Fogel put it, "We will continue to focus on making the right investments across our brands -- in people, systems, and marketing -- to continue to grow our business for the long term."

Yet investors are having a hard time accepting the slowing trajectory for Priceline's future gains in key metrics. For the fourth quarter, the online travel specialist predicted that room nights booked might rise at a sluggish pace of just 8% to 13%, with gross travel bookings climbing by only 9.5% to 14.5% despite a four percentage point tailwind from favorable currency impacts. Adjusted net income of $13.40 to $14 per share was well below the $15.57 per share that represented the consensus forecast among those following the stock. Moreover, even for those who are familiar with Priceline's habit of understating its performance expectations, the extent to which the guidance range came in under current forecasts made some investors nervous about just how much of a slowdown Priceline might have to face.

Priceline investors weren't happy with the report, and the stock dropped almost 7% in after-hours trading following the announcement. If travel bounces back from the adverse weather we've seen lately, then Priceline's business fundamentals could follow suit. For now, though, even long-term investors will need to watch future growth rates closely to make sure that their investing thesis for holding the online travel giant's stock remains intact.