The hotel-booking specialist tumbled on weak guidance in its earnings report.

Shares of Trivago N.V. (TRVG 4.49%) were taking a dive today after the hotel-booking platform offered disappointing guidance in its third-quarter earnings report. The stock was down 20.2% as of 12:19 p.m. EDT.

Trivago actually beat estimates on top and bottom lines, but lower guidance for the full year likely prompted the sell-off. 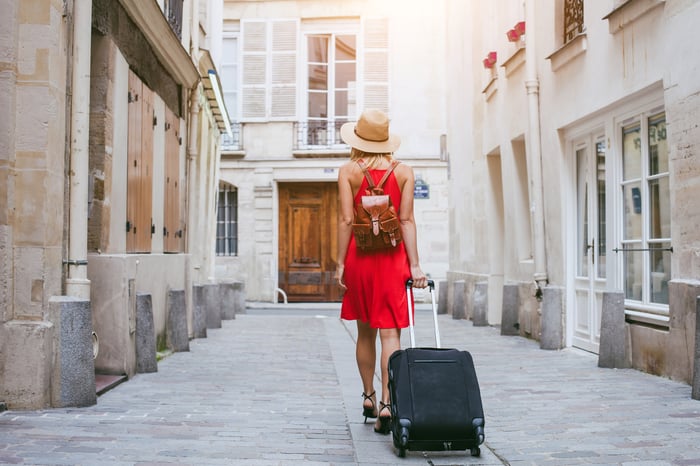 Trivago said revenue growth slowed from 62% in the second quarter to just 17% as the top line hit 287.9 million euros; however, that topped expectations at 286.1 million euros. On the bottom line, it reported a loss of -0.02 euros a share, but that was better than the consensus at a loss of -0.04 euros.

Nearly 80% of Trivago's revenue in the quarter came from Expedia and Priceline Group, and Priceline appears to spending less on advertising on Trivago's site. Trivago slashed its guidance in September as it saw lower revenue per qualified referral, resulting from a change in the way it works with advertisers. That caused the company to pull back on marketing spending, which led to slower growth in traffic and revenue.

Management did not make a direct comment on the quarter, but explained that "increased testing activity on our marketplace by several large advertisers has been subsequently accompanied by changes in these advertisers' bidding strategies and a corresponding adjustment of their cost-per-click bids on our marketplace," which has had a negative impact on revenue and profitability. As a result, Trivago now expects full-year revenue growth of 36 to 39%, down from a previous forecast of 40%. It also sees revenue falling in the first half of 2018, but expects a return to growth in the second half of next year.

With a forecast like that, it's clear why shares plunged today. With no profits and negative growth expected, Trivago could have even further to fall.