Could SpaceX even be profitabile already?

Once upon a time, SpaceX boasted right on its website that it was both "profitable and free cash flow positive" (admittedly, it never said exactly how profitable). Then, all of a sudden, it wasn't profitable at all. In fact, as The Wall Street Journal reported earlier this year, even back when SpaceX was claiming to be profitable, it probably wasn't. 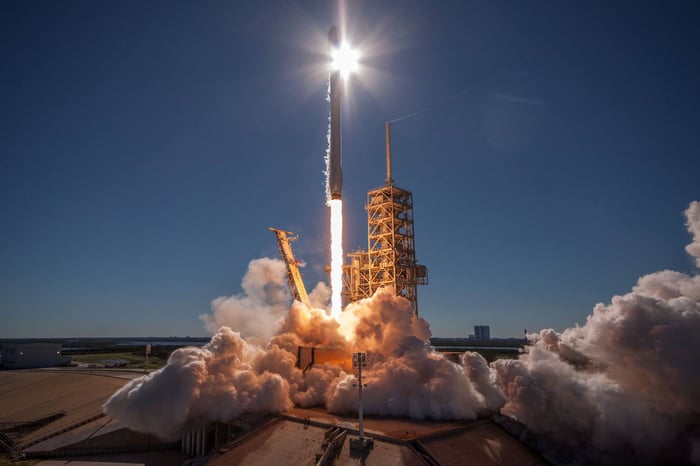 On Oct. 30, SpaceX launched Koreasat-5A into orbit. It has now launched 16 rockets this year -- more than any other company in the world. Image source: SpaceX.

As explained in the Journal's expose, SpaceX was able to earn about a 0.2% operating profit margin on about $1 billion in revenues in 2014. This aligns pretty well with Musk's observation, in a 2013 internal SpaceX memo reprinted in Ashlee Vance's biography of the CEO, that SpaceX needs to overcome fixed costs of "roughly $800 million to $900 million" a year before it can begin earning profits.

But what happens after SpaceX does pass the $1 billion mark?

Obviously, not every revenue dollar over $900 million falls straight to SpaceX's bottom line. In addition to its fixed costs, SpaceX also has variable costs -- the cost of fuel for each incremental rocket launch, for example. Still, according to internal documents reviewed by the Journal, as recently as 2016 SpaceX was targeting 3% operating profit margins on $1.8 billion in revenue. Granted, that target was derailed after the 2016 SpaceXplosion.

But still, we can probably use that ratio as a placeholder: If SpaceX can do $1.8 billion in business, then it should be able to earn 3% profit margins on that business.

So how close is SpaceX getting to that goal in 2017?

Last month, in a very busy week for space-watchers, SpaceX launched its 14th rocket of the year into orbit -- then sent up its 15th rocket two days later. Rocket No. 16 went up just last week, when SpaceX sent the Koreasat-5A communications satellite rocketing into orbit atop a Falcon 9 launch vehicle (then landed the first stage of said rocket safely back on Earth).

Now, we've previously calculated the average cost of a SpaceX launch at $72 million in revenue for the company. (For more detail on how we arrived at that figure, click here.) Times 16 launches to-date, this implies that SpaceX has probably collected about $1.15 billion in revenue so far this year. Granted, this is just a guess. As a private company, SpaceX is not required to disclose  its profits and losses. But at least it's an educated guess.

Once more unto the breach?

What does this imply for SpaceX's profitability? To start with, it strongly suggests that after two years of troubles, SpaceX is profitable again.

SpaceX breached its magic billion-dollar barrier-to-profitability two launches ago. We know that SpaceX can eke out at least a tiny profit at $1 billion in revenue, so chances are good the company is now earning at least the same 0.2% operating profit margin now that it earned back in 2014. Granted, SpaceX is probably far less profitable than rivals Boeing (BA -1.14%) or Lockheed Martin (LMT 0.04%), which earned operating profit margins of 7%, and 13.5% on their respective space businesses last year (according to data from S&P Global Market Intelligence). SpaceX probably hasn't yet reached the 3% level of operating profitability it was aiming for last year. But it probably does have some profit.

Houston, we have liftoff

And here's another thing to consider: To date, three of SpaceX's launches conducted this year have utilized "flight proven" (aka reused) first stages. As SpaceX Chief Executive Officer Elon Musk has explained, reusing a Falcon 9 first stage probably saves the company about $40 million in costs.

SpaceX has also suggested it might cut the price it charges on its launches by 30% ($22 million on a $72 million average launch cost) for launches utilizing used -- sorry, "flight proven" -- rockets. Subtracted from $40 million in saved costs, that $22 million reduction in revenue would still leave SpaceX with perhaps $18 million in savings -- money that could potentially fall straight to SpaceX's bottom line.

That translates to about a 25% boost to profit margins on SpaceX launches using flight proven rockets. And with such missions taking up close to 20% of SpaceX's launch manifest right now, this implies as much as a five-percentage-point boost to SpaceX's annual operating profit margin. It could put SpaceX within spitting distance of Boeing's profit margins on space, and close the gap with Lockheed Martin's space division.

As SpaceX puts more and more payloads aboard flight proven launchers in the future, SpaceX's profit margins should only grow. Its ability to keep undercutting Boeing and Lockheed on price, and keep stealing business from the incumbent rocket-launchers, will grow in tandem.