Please ensure Javascript is enabled for purposes of website accessibility
Log In Help Join The Motley Fool
Free Article Join Over 1 Million Premium Members And Get More In-Depth Stock Guidance and Research
By Rich Smith - Oct 22, 2017 at 7:13AM

But how do you beat a company that launches half the world's satellites?

On Oct. 9, SpaceX completed its 14th satellite launch so far this year, putting 10 satellites into orbit for Iridium. Two days later, SpaceX completed launch No. 15 -- this time for SES -- en route to a record-breaking 20 launches anticipated by the close of 2017. Next year, SpaceX plans to increase that launch count by 50%, sending 30 rockets into orbit.

At that point, SpaceX founder Elon Musk said at the 2017 International Astronautical Congress in September, the company will account for "approximately half of all orbital launches that occurs [sic] next year on Earth." But who's doing the other launches? And how close are SpaceX's rivals to making the space race into a real "horse race"? 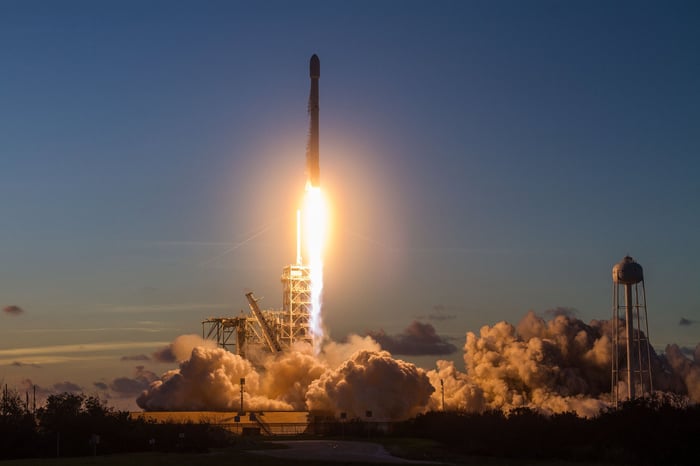 With its Oct. 11 Falcon 9 launch, SpaceX secured its position as the world's biggest rocket-launch company of 2017. Image source: SpaceX.

Who's who in space launch

Here in the U.S., United Launch Alliance remains SpaceX's biggest rival. In terms of dollars paid, the ULA joint venture between Boeing (BA 0.60%) and Lockheed Martin (LMT 0.23%) remains  NASA's favorite contractor. Over in Europe, Airbus' (EADSY 0.55%) Arianespace is another big player (albeit one not permitted to "play" here in the U.S., where NASA prefers to send its satellites up aboard U.S.-built rockets).

SpaceX, Boeing, Lockheed, and Ariane are hardly the only games in space-town. Around the globe, seven space-faring nations (or in Europe's case, multinational regions) launch rockets. In addition to the U.S. and Europe, China, India, Japan, Russia, and now New Zealand have all launched rockets this year. Collectively, they've attempted 69 launches so far this year, of which 64 eventually ended up in orbit.

In fact, last week alone -- and indeed, on the very same day that SpaceX conducted its Iridium launch -- both China and Japan launched rockets of their own. Taking a look at those two launches might help to give us a more complete picture of what kind of competition SpaceX is up against, globally, and the chances of China -- or anybody else, really -- catching up with SpaceX.

Technically, "China's" launch of a Venezuelan remote sensing satellite last Monday was conducted by the China Great Wall Industry Corporation (CGWIC), which, according to S&P Global Market Intelligence, is a subsidiary of China Aerospace Science and Technology Corporation (CASC) -- which is itself majority-owned by the State-Owned Assets Supervision and Administration Commission (SASAC) of the State Council of China. That makes CGWIC an arm of the Chinese government.

What does this mean for investors? It means that in competing against CGWIC, SpaceX is essentially competing against the entirety of the Chinese nation, an entity that can incur almost unlimited debt to develop and expand its space program -- or print its own money to fund it. This makes for a formidable competitor.

That said, the launch was still only China's 10th launch of the year, and only eight of those launches have been successful. China plans four more launches this year. Even if all four reach their orbits successfully, though -- and even if all of the previous ten had succeeded -- China would still end this year launching fewer rockets than SpaceX has launched already, and successfully.

Despite the long odds, SpaceX is beating China soundly.

The situation with Japan is more like what we see here in the U.S., where SpaceX competes with Boeing and Lockheed as the prime NASA contractors. Japan's launch last Monday was its sixth and final planned launch of 2017. It was the country's fifth success of the year, sending up the fourth and final "Quasi-Zenith Satellite System" satellite needed to assemble a homegrown GPS system for Japan.

The Japan Aerospace Exploration Agency (JAXA) -- Japan's version of NASA -- conducted the launch, but the H-IIA rocket that sent the satellite up was built by publicly traded private company Mitsubishi Heavy Industries on JAXA's behalf.

Mitsubishi Heavy is thus more constrained by the ordinary need of companies to operate profitably than are SpaceX's rivals in China. But Mitsubishi is no pushover in the capitalist marketplace. According to S&P Global data, the company boasts a $13.5 billion market capitalization, and impressive profitability -- $927 million earned over the past 12 months. (If you happen to be inclined toward international investment, that works out to a P/E of just 14.6 for Mitsubishi Heavy stock, which is considerably cheaper than the valuation of either Lockheed Martin (which costs 18.4 times earnings) or Boeing (22.7 times).

As for SpaceX itself, it's now the leading launch provider in the world, and its lead is only growing. Now valued at $21 billion (after its latest private funding round), it's the one space company ordinary investors want to own but cannot buy.