Please ensure Javascript is enabled for purposes of website accessibility
Log In Help Join The Motley Fool
Free Article Join Over 1 Million Premium Members And Get More In-Depth Stock Guidance and Research
By Matthew Frankel, CFP® and Rich Smith - Oct 3, 2017 at 5:22AM

Companies whose revenue comes from various countries all over the world, as opposed to just one country, can be excellent choices for retirees. An international revenue stream hedges against currency fluctuations, as well as country-specific economic issues. While not all international stocks are appropriate investments for retirees, here are two that our Foolish investors think are worth a closer look: ABB Ltd. (ABB -0.45%) and American Express (AXP 1.28%).

Robots are (always in) the future

Rich Smith (ABB Ltd.): I can't justify buying this one on valuation grounds, but I just can't shake the feeling that ABB stock is one to keep an eye on. 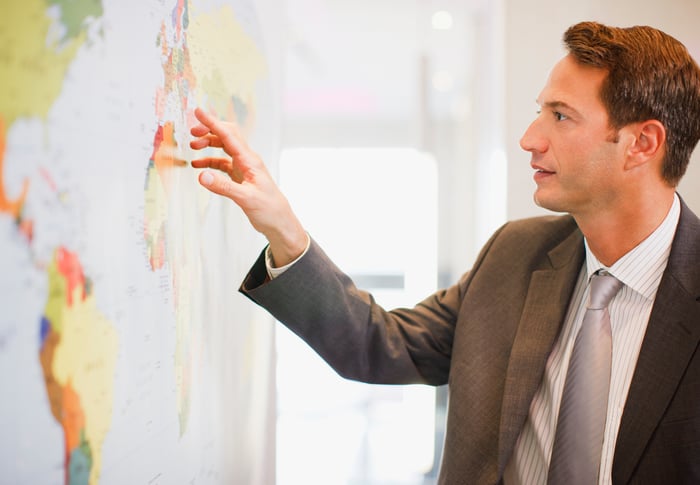 If you're a retiree today, you may have grown up reading the works of science fiction authors such as Robert Heinlein and Isaac Asimov. If so, you know that robots are supposed to be "the future," yet -- a few Roombas here and there notwithstanding -- you're probably disappointed that that future still hasn't quite arrived.

Well, over in Switzerland, Zurich-based ABB is one company trying to change that. One of the biggest international companies you've probably never heard of, ABB weighs in at a market capitalization of $50 billion and does more than $33.5 billion in annual sales -- including sales of robots. In the $11 billion China market, ABB is one of the leading retailers of robots. And just this week, ABB threw down the gauntlet and announced a plan to double its production of robots in China, part of a global effort to become the No. 1 producer of robots worldwide -- overtaking Japan's Fanuc Corp. and keeping Germany's Kuka.

Mind you, with a P/E ratio of nearly 24, and a long-term projected growth rate of 6%, ABB stock is not cheap. I can't recommend buying it right now. But if you're a retiree with time on your hands and enough patience to wait for the right price to present itself, I think ABB Ltd is a good stock to put on your watch list.

A valuable brand and shareholder-friendly management

Matt Frankel (American Express): Many investors don't think of American Express as an international company -- after all, "American" is right there in the name.

However, you might be surprised at how much of American Express' business is international. For example, at the end of 2016 the company had 109.9 million total cards in force worldwide, and 62.4 million of these were outside the United States.

There are several reasons American Express makes an excellent investment for retirees. First, the company has proved its ability to survive any economic conditions or company-specific challenges, such as the loss of its Costco partnership. AmEx has a more diverse revenue stream than Visa or MasterCard. As a credit card issuer as well as a payment processor, AmEx profits from both sides of the credit card business -- interest income and processing fees.

Speaking of fees, American Express has an affluent and high-spending cardholder base that's highly attractive to merchants, which gives the company the advantage of pricing power over rivals.

Finally, American Express is a rather attractive value right now, at just 15 times 2017's expected earnings, and the company does an excellent job of returning capital to shareholders. American Express isn't a high-dividend stock, but its yield is much higher than Visa or MasterCard, and the company has a history of aggressively buying back shares.