Please ensure Javascript is enabled for purposes of website accessibility
Log In Help Join The Motley Fool
Free Article Join Over 1 Million Premium Members And Get More In-Depth Stock Guidance and Research
By Matthew Frankel, CFP® - Aug 18, 2017 at 8:21AM

American Express has a different business model from its rivals. Here's why I'm a believer in the company for the long run.

Its growth may not be as impressive as that of rivals Visa and MasterCard, but I'm still a big fan of American Express (AXP -0.03%) as a long-term investment -- for its strong growth, a rock-solid brand, and some of the most valuable and innovative credit card offerings in the market. Here's an overview of the reasons why investors may want to take a closer look at American Express.

At first glance, it may seem like "growth" is the wrong word to use when discussing American Express' business. After all, the company's net income fell by 33% over the past year.

However, keep in mind that American Express' earnings numbers from the second quarter of 2016 still included its exclusive Costco relationship, which no longer exists. Excluding the Costco relationship and the impact of foreign exchange fluctuations, the company's revenue grew 8% year over year on higher interest income and consumer spending. Total loans increased by 11% in the past year. Overall, AmEx's business is doing quite well.

The second quarter is the last one that AmEx will have to adjust for its Costco partnership, so from now on, its growth should be more straightforward. 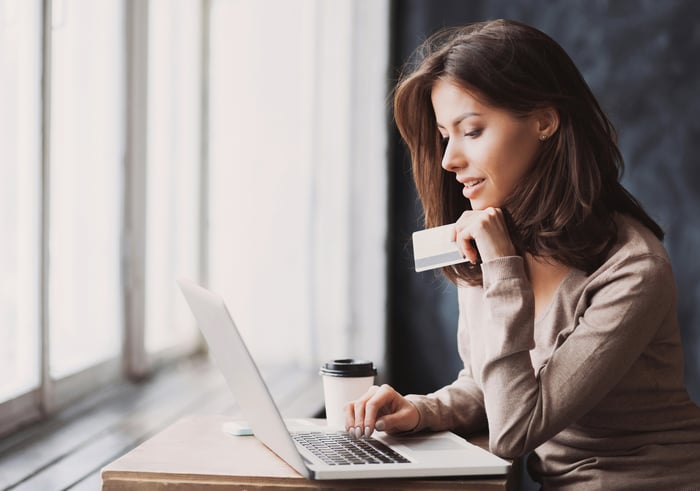 Not just a credit card processor

Unlike Visa and MasterCard, American Express is a credit card issuer, as well as a payment processor. This allows American Express to profit from both sides of the business, and also diversifies its revenue stream.

The majority of American Express' revenue comes from fees charged to merchants, but the company also makes a substantial amount of money ($7.2 billion in 2016) from interest income, as well as from card fees ($2.9 billion), because it issues its own cards.

If you've ever wondered why some businesses don't accept American Express, it's because the company charges merchants higher swipe fees than the other major credit card companies. American Express has been able to get away with this because it has a cardholder base that's generally affluent and spends more money than Visa or MasterCard holders, a characteristic that's highly attractive to retailers.

American Express is very shareholder-friendly in terms of returning capital. Between dividends and share buybacks, AmEx has returned nearly all of its net income to shareholders.

Just recently, American Express announced a 9% dividend increase, as well as an additional $4.4 billion in authorized share buybacks. Since 2013, American Express has repurchased nearly 19% of its outstanding shares -- an impressive buyback rate.

And while American Express' 1.5% dividend yield isn't exactly a high payout, it's more than double the yield of Visa or MasterCard.

Competition in the credit card market has never been higher, but American Express offers innovative and unique credit card products, which help to maintain its competitive advantage.

This is especially true in the high-end segment of the market, where American Express recently revamped the features of its flagship Platinum Card from American Express, including such unique perks such as $200 in credits for Uber rides per year, $200 in annual airline fee credits, as well as airport lounge access that surpasses that offered by most rivals, including the ultra-high-end Centurion lounges.

For travelers, American Express' Delta co-branded cards are offered in three tiers, which help the company capture all levels of the frequent-traveler market. And its no-annual-fee products, such as the American Express Blue Cash Card, offer some of the most generous reward programs in the market.

In a nutshell, not only does American Express have an extremely valuable brand, but it has a diverse product portfolio that in many ways is simply better than the competition.

While its growth is not quite as impressive as that of Visa or MasterCard, American express looks rather cheap for a rock-solid company with 8% revenue growth. As of this writing, the stock trades for just 15 times 2017's expected earnings, as opposed to Visa and MasterCard, which both trade for 2017 earnings multiples that are roughly twice as high.

Berkshire Hathaway (BRK.A 1.35%) (BRK.B 1.26%), the conglomerate led by Warren Buffett, is a major American Express shareholder, with a stake of about 17% in the company. Buffett himself has spoken in favor of American Express as a long-term investment in recent years, and continues to believe in the company despite the intense competition in the industry.

Also, it's worth noting that Buffett recently asked the Federal Reserve to allow Berkshire to own up to 25% of the bank. While it remains to be seen if the request will be approved -- and if it is, whether Buffett actually wants to buy more stock or just give himself a cushion for the effects of AmEx's share buybacks -- this could be taken as a sign that Buffett has no intention to sell.

While I never suggest buying or holding a stock simply because a billionaire owns it, it doesn't hurt that one of the most successful investors of all time is a major fan of AmEx. And if Buffett does decide to increase Berkshire's American Express stake, it could certainly be a catalyst for shares to rise.