If you only look at the bottom line of American Express' (NYSE:AXP) second-quarter performance, you'd be excused for thinking that the results were dreadful. But if you dig further into the reasons behind the sharp drop in its earnings, things look much better.

The decline in American Express' earnings isn't pretty, but what investors need to keep in mind is that American Express' second-quarter earnings last year reflected its exclusive credit card arrangement with Costco Wholesale Corp (NASDAQ:COST). It was at the tail end of that quarter that Costco stopped accepting American Express cards in its warehouses and switched to Visa.

This had a huge impact on American Express' business. A full 10% of its 112 million cards in circulation were co-branded with Costco.

To get a better sense for how American Express performed in the second quarter of this year, it's helpful to adjust for this. After doing so, things look much better for the credit card company.

Excluding business from the discontinued relationship, as well as the impact of foreign exchange rates, American Express' net revenue grew 8% on a year-over-year basis. As the company notes in its earnings release, the increase primarily reflected higher net interest income and card member spending. 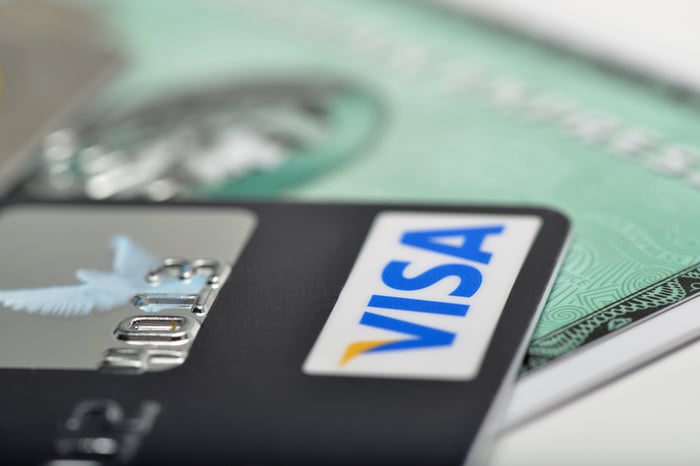 "We started the year strong and accelerated the pace this quarter by continuing to execute a strategy that is transforming our consumer, commercial and merchant businesses," said chairman and CEO Kenneth Chenault. He then continued by explaining:

Our transition started in 2015 when we renewed several long term cobrand relationships and moved away from others that no longer made economic sense. It continued with aggressive initiatives to lower operating expenses and increase investment spending in businesses with the most attractive growth potential. While each of those moves suppressed short-term results, we believed they would put us in a stronger position for the longer term. They have.

There were a number of factors, beyond higher card member spending, that played into American Express' performance last quarter. New card acquisition was strong, particularly among affluent customers, which are the most coveted type of customers for credit card companies. Credit quality remained strong, as is the case across the financial services industry. And it made further progress on cutting expenses.

It's also important to note that it was during the second quarter that banks, American Express included, learned the results from this year's stress tests. These are designed to assess whether the nation's biggest financial institutions have enough capital to survive a sharp economic downturn akin to the financial crisis.

American Express made it through the Federal Reserve-administered gauntlet with enough capital to satisfy regulators. However, while this freed up the company to increase its dividend and share buybacks, it scaled back its original planned capital actions. Soon after the stress test results were released, American Express announced a 9% boost to its quarterly dividend and added $4.4 billion to its share repurchase authorization.

Shares of American Express dropped following its Wednesday earnings release, but they have since recovered. For the year, its shares have gained 16% compared to a 10% gain on the S&P 500.